“Nature is not a physical place to go to; it is not a treasure to be guarded or preserved; it is not an essence to be protected. Nature is not a text to be deciphered according to the codes of mathematics or biomedicine. It is not alterity that offers origin, raw materials, and services. Neither mother nor curator, nor slave nor matrix, Nature is not a resource or means for man’s reproduction. Nature is strictly a commonplace”. So affirms Donna Haraway, one of the foremost exponents of contemporary ecological and feminist thought, in the essay The promises of monsters. A regenerative policy for inappropriate otherness (Habitus edition, 2019). If humans are a destructive species that has not yet learned to live with the rest of the world without damaging it, nature’s idea or existence as we usually conceive it is an entirely human artifice that reflects how men think themselves and relate to what exists. According to the American philosopher and teacher, detecting this artifice is the first step to imagine that other artifices are possible, starting from which biological (and technological) entities in continuous metamorphosis will be able to find spaces of coexistence on this planet. While Donna Haraway’s reflections aim to invalidate the Western thinking system that focuses on the confrontation of two opposing elements, such as the man/woman, natural/artificial, body/mind categories that have been made obsolete by scientific experimentation, many artists have in recent years begun to investigate with different languages and outcomes the flaws of anthropocentric vision of nature.

In this thematic vein, we can also place Lida Goldoust, an Iranian painter who focuses her artistic production on what at first glance seem to be the traditional genres of still life and landscape. Therefore, the subjects she dedicates herself are wooded expanses dense with trunks and branches, floral compositions observed at close range, and lush tangles of shrubs and leaves, of which it is impossible to guess the extension and size. In these seemingly plausible compositions, the artist manages to challenge the prejudice inherent in our interpretative habits with subtle sensitivity by exhibiting a sharpness of details that, instead of generating a calm pictorial re-presentation of reality, has the opposite effect, immersing the vision in a mysterious suspension. If initially, the gaze tries to get used to the harmony of colors and lines by tracing what it sees to an elegant reworking of an ordinary subject, more careful and prolonged observation reveals how those forms are animated by an internal energetic swarming that transmits from one brushstroke to another regardless of the figurative boundaries between the things represented and the chromatic material used. By consistently insisting on specific details, such as the branches that seem to wrap trees as if they were a network of veins independent of the plant from which they are supposed to have been generated or the strange foliage and filamentary leaves stirring between flowers with movements from aquatic beings, the artist makes us see nature in biological and emotional terms regardless of the aesthetic (and culturally anthropocentric) categorizations with which man has for centuries oriented his gaze.

The realistic approach dissolves into images in which shapes and colors reflect how the artist reacts to life by materializing an atmosphere of sensuality and mystery which alludes to the discovery of new worlds and new possibilities of existence that incorporate in the landscape something that goes beyond the physicality of things, a non-linear morphology in continuous definition and movement. At this point, nature is freed from the clichés to which it is typically associated; it is no longer an environment (to take up Donna Haraway’s intuition mentioned at the beginning) that finds its reason and order in its relationship with man but appears to be an open field of possibilities in which the multiple facets of life intersect in a kaleidoscopic reshuffling. Lida Goldoust’s painting, passionately permeated with amazement for the wonders of the visible and animated by a deep bond with a natural universe of which the artist feels a part, stages a refined dialectic of paradoxes between expressiveness and understanding, adherence to reality and artifice, a sense of belonging and respect for diversity. Nature in its many forms exists by itself, it is not a tool of beauty or survival for human well-being, but at the same time, it is perhaps the main reference through which man can understand and think about himself.

What appears urgent and necessary in our age is, therefore, according to Lida Goldoust, to restore the connection with nature that marked the thought and actions of past generations and to reactivate this interrupted dialogue in the light of a new awareness of the infinite plurality of manifestations of life that it contains. Her paintings are an invitation to travel, cross borders, and discover the multiple sentient ecosystems that coexist in the same fragment of the world, sometimes intersecting and other times remaining parallel. The brushstrokes that she lays on the canvas embody a sinuous idea of ​​growth, directly borrowed from her capacity for empathic observation of the details and the vibration that moves them, while the expressive chromatism she uses expresses her complete adherence to the vital explosion that is revealed to her sensitive gaze. To further involve the viewer in this experience, the artist applies a photographic cut to her images that omits an exhaustive and concluded vision of the subject (for example, eliminating the boundaries of the forest, the edges of the leaves, or the origin of the stem) to induce the user to mentally complete the miracle of the “visual organism” that he finds in front of him by immersing himself completely. 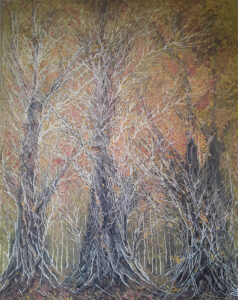 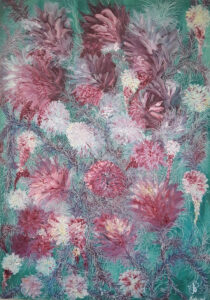 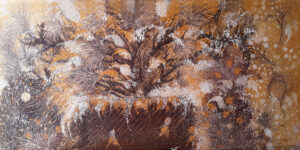