ARKEN Museum of Modern Art, Is..

Giorgio Griffa. An abstract world… Is it eno...

Giorgio Griffa. An abstract world… Is it enough?

Giorgio Griffa, one of the most incisive Turin artists of the post-war period, returns to ABC-ARTE gallery in Genoa, with the exhibition Un mondo astratto non basta (An abstract world is not enough) that was born in continuity with the 2015 solo show, Esonerare il mondo, and with the group show in 2018 Absolute Painting. Giorgio Griffa, Tomas Rajlich, Jerry Zeniuk, also on show at ABC-ARTE. The exhibition is accompanied by a catalog with an interview-dialogue between Leonardo Caffo and Giorgio Griffa and the critical essay by Alberto Fiz.

In the Gallery we find 15 of the most significant historical works of the 70s where the artist goes beyond the standard concept of pictorial practice and joins the Analytical Painting and Poor Art, thus developing a thought that will accompany him throughout his artistic path: “I don’t represent anything, I paint”. From then on Giorgio Griffa breaks all certainty and begins to reshape a new thought, for him painting is an action, a means of expression to be able to more fully embrace every artistic field of life that is of fundamental importance for the well-being of one’s existence; painting is therefore a means, not a purpouse, which relates to other fields of knowledge such as philosophy, music or science. The exhibition poses as a fundamental question the relationship with reality by a pictorial act that is indispensable: “Making through images is different than making images. It means making use of images to discover the infinite possibilities of poetry that are hidden in the world”.

The title of the exhibition, Un mondo astratto non basta, is much more than current and makes us reflect even more on the notion of “abstract” which nowadays, linked to technology, becomes the only real tangible, livable and usable reality; as on the other hand, equally abstract is color, “which takes shape only in the concrete” (as Caffo says in the dialogue with the artist) and the immaterial comes to life thanks to the brush on the canvas, becoming a passage of energy of the world that concretizes itself in the sign. Un mondo astratto non basta: it is also a “concept” for the user, an invitation to see the works with his/her own eyes and not only virtually (as we are used to in this period due to the pandemic), an appeal to scrutinize everything in a more concrete way, moreover in the specific case of the works the concreteness is given by the sign and the color. However, an abstract world may perhaps suffice if we see it through the works of Giorgio Griffa, where his acrylics on jute and cotton turn out to be less and less drawn and more and more “marked”.

Essential, indispensable, primitive and substantial is the “sign”, a fundamental element in every work of the artist, starting from the first room of the gallery where we find a large work entitled Obliquo (101 x 185 cm) and the small Tre Segni (44 x 62 cm). The painted jute is not a support for its own sake, but becomes a fundamental part of the work, if not even the main part, a real installation, then completed with four small thin nails on the sides.

In the second room of ABC-ARTE we find four works: two entitled Obliquo, of different and contrasting dimensions (the alternation of works of different formats is a constant throughout the installation of the exhibition), painted in acrylic on jute with oblique signs and with primitive features, but also with well-defined colors, such as orange and pink; in the large canvas the predominant colors are instead light blue and blue, shades that we will find in many of his works. Blue-light blue, pink, lilac and orange are the main colors that we will recognize throughout the gallery, as are the oblique signs alternating with the verticals that give a composite visual sense, despite the apparently casual and dirty.

Both in the works of the 70s, those exhibited in the gallery, and in the more current ones, Giorgio Griffa paints – indeed marks – only part of the support, where his “unfinished” takes on an unexpected value over time. It means, as the artist himself says, “omitting on the canvas the final point which, as well as the final point of this sentence, projects it instantly into the past”.

Looking at his works in their entirety, we find similar titles that also describe what we see, as if to explain a very evident stroke and design: Orizzontale, Campo Azzurro, Azzurro, Linee Verticali, Segni Orizzontali, Campo Giallo, Campo Rosa, Quattro Colori, titles that reflect exactly what we scrutinize: “primary signs”.

A work in particular that caught my attention is Campo Rosa from 1987 (88 x 56 cm), the youngest work in this exhibition; here the canvas develops vertically, the sign becomes more drawing and you begin to see a sky that comes out of the jute material, dark pink signs that contrast a light pink, all rounded, landscape curves, color curves, curves of drawing as if they were made by children, where horizontal and vertical signs alternate in a playful dance. Mainly this work is a passage from primitive to contemporary, where the abstract is evident, but it is not enough … is there a need for more sign in the world? Maybe it’s time to go beyond the canvas, beyond even the technology, to touch and touch your hands. 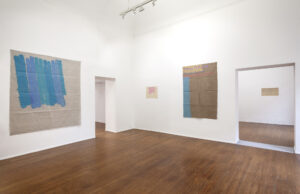 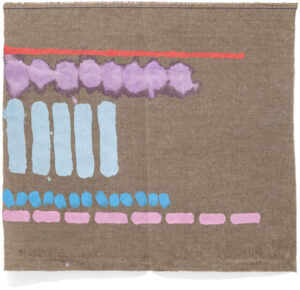 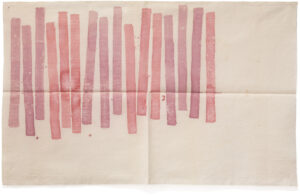 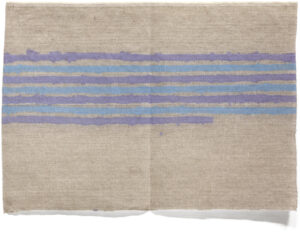