Giovanni Chiamenti’s (1992) in-depth research is an ongoing dialogue between art and science that addresses extremely topical issues, focusing on too often ignored actors such as bacteria, hybrid microorganisms and bioplastics. A transdisciplinary practice that has given rise to an imaginary bestiary, described in the course of this conversation.

Edoardo Durante: I had the pleasure of visiting your latest project, developed within the evocative environment of Spazio Volta, Interspecies Kin: a veritable archive in which dozens of organic species developed on planet Earth in a hypothetical future are collected. I was struck by the concept of animal and plant hybridization….
Giovanni Chiamenti: The title itself is rather explanatory: I borrowed the term kin from Donna Haraway’s vocabulary, since I am interested in the concept of kinship, interspecies in particular. Nowadays it is evident how crucial it is to understand the need to coexist with other creatures, with the Other rather than humans, in order to respect all the organisms that contribute to the development and survival of our planet. In particular, the cycle of works takes inspiration from Elysia Chlorotica, a marine gastropod capable of performing chlorophyll photosynthesis by incorporating part of the chloroplasts contained in the algae it feeds on: it is a perfect example of an interspecies hybrid, an animal-vegetal hybrid. One of the central points of my research is the attempt to conceptualize a new organic glossary, an archive containing species that one day might populate the planet: to the works created in 2021, through a kind of linguistic hybridization, I have applied a scientific pseudo-nomenclature that also includes the use of imaginary adjectives. The pieces presented within Interspecies Kin have been titled with a pair of letters and geographical coordinates indicating the hypothetical places where these organisms might be found, thus transforming the exhibition space into a kind of non-place characterized by coordinates from the depths of the globe.

How did the idea for this project come about?
Interspecies Kin has a dual origin: the project starts from a science fiction vision that finds support on real data from extensive research in microbiology and geology. For instance, Ideonella sakaiensis is a bacterium capable of assimilating and deteriorating microplastics that infest our seas, or, moreover, the discovery of the giant larvaceans or Bathochordaeus, which are able, through an external filter, to collect waste and microplastics and expel them through feces at a later time. While we observe how the bacterium Ideonella sakaiensis can partially reduce the amount of plastics scattered in the ocean, the so-called giant larvaceans bring additional pollution by carrying microplastics to the bottom of the ocean.

How do you think your artistic production has evolved over the years?
Surely, today I realize that I approach certain topics with much more awareness. I started to deal with the topic of plastics in 2019 through works made with the latest 3D printing and stereolithography techniques, but in an insufficiently in-depth way, remaining on the surface. In recent years, I have begun to deal with issues related to the environment, having professionals from the scientific world join me in order to develop transdisciplinary projects that can have a role in part popularizing or at least catalysing ideas. To this day I still use the American raku technique, since over time it undergoes transformations at the chromatic level, due to the oxidation of metals, such as copper oxide and black silver nitrate, that make up the dyes with which they are coated. Thus, I have realized a kind of parallelism between the transformations that Elysia Chlorotica undergoes by performing chlorophyll photosynthesis and, as a result, changing colour, and a chemical transformation like the one that my installation works present.

Previously you mentioned Donna Haraway’s studies; I think there are insights that can also be traced back to Timoty Morton’s theses or Rosi Braidotti’s posthuman ones. Your practice perfectly dialogues with disciplinary fields seemingly distant from the art world, such as science and technology…
My works are deeply related to the concept of hybrid; I believe that my work is not only artistic, but supported by objective and real theses: just as a scientist in a laboratory relentlessly searches to deepen and make new discoveries, so should an artist work, at least in my opinion. In the last years several internationally renowned artists, such as Olafur Eliasson and Tomás Saraceno, have delved into environmental issues, but not directly related to the so-called climate change, but rather oriented toward investigating natural elements for what they are: Eliasson was initially particularly interested in issues related to sunlight, Saraceno has been studying wind and the ability of materials to hover in the air for years. These are just a few examples of macro-themes, which have been deepened more and more over the years; we are somehow witnessing a shift from macro to micro-themes.

How does the installation develop and how did you dialogue with such a particular environment as the one of Spazio Volta?
Spazio Volta develops within what dating back to the medieval period was a public fountain, so a space that has always been connoted by the aquatic element. Thanks to the close collaboration with the Genspace community biolab in Brooklyn, I had the opportunity to delve into the study and experimentation of bioplastics derived from two natural polymers: chitosan, which in nature can be found inside the shells of mollusks and crustaceans, and carrageenan kappa, contained within some particular types of algae. Using these two different polymers, I began to create biodegradable plastics. Carrageenan kappa, in particular, has the ability, once submerged in water again, to return to its original gelatinous state and then to disappear altogether. Therefore, the exhibition was born out of the willing to demonstrate how organisms that inhabit what we know as the deep blue, the deep sea, regularly assimilate plastic materials that pollute the sea, thus becoming themselves partly composed of microplastics.

It is clear how your intent was to create an environment, a kind of microcosm, inhabited by the hybrid creatures you made…
The goal during the design phase was to create a micro-environment, or a micro-world, dealing with a theme that would fit perfectly with the history of the place itself. The main element is definitely the central body, SO 13°53’56 “N 153°41’29 “W, suspended in the centre of the space, it shows the public the evolutionary process of bioplastic that, in contact with water, disintegrates and returns to its original stage.

It only remains for me to ask you, at this point, how important is the term “ecology”  in your production?
It is fundamental, and it is reworked through an entirely personal aesthetic. My work has a double matrix: the basis is scientific, but the formal restitution comes from my imagination, it is in no way related to real forms, rather to fantastic and sci-fi aspects.

A kind of compensation…
Yes, I would say so. A kind of imaginary bestiary that denounces a condition and providing food for thought on contemporary issues. 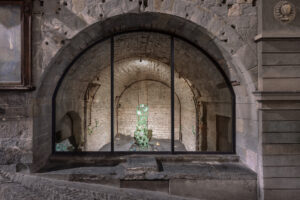 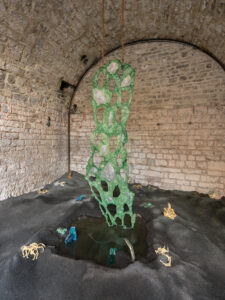 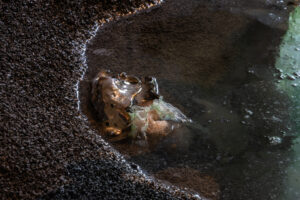 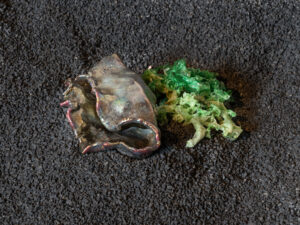 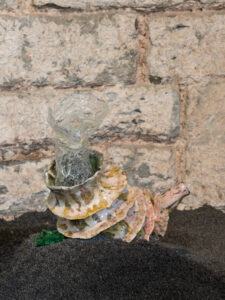