In conversation with Lorenzo B..

Luca Campestri open studio at Palazzo Vizzani in B...

At a certain point you find yourself in an almost completely dark room, saturated with a light, but dense smoke, with a hum in the background made of sounds and, as the only source of light, the one that comes out from a slit in the floor, residue of an ancient way of heating homes. Strong sensations that force you to decide whether to get out of it as soon as possible or get caught up in curiosity for any symptoms of unexpected presences protected by the darkness. But it is not a museum of horrors, much less a bandwagon for amusement park-goers to enjoy.

Here the ghostly, the elusive vertigo of the dark and mysterious are taken very seriously. The installation boasts not only a respectable intellectual legitimacy and a sumptuous context, but also the mastery of a talented young artist. Intellectual legitimation is that which comes from the spectral ontology (in English it is called hauntology) of the French philosopher Jacques Derrida: more specifically, from his vocation to grasp and explore the intangible boundary between being and non-being, between the trails of the already present and presentiments of the future in progress. The sumptuous context is that of the sixteenth-century Palazzo Vizzani in Bologna, headquarters of the cultural association Alchemilla. The talented young artist, a pupil of Luca Caccioni at the Academy of Fine Arts of Bologna where he graduated in 2021, is Luca Campestri.

What made this meeting possible was the second edition of the residency-studio project dedicated to the visual and performing arts promoted by Alchemilla and curated by Gino Gianuizzi. In fact Luca Campestri, born in Florence and winner for two consecutive years of the Art Up Critics and Collectors Award promoted by the Zucchelli Foundation, has been selected to reside and experiment with his ideas in the evocative rooms of Palazzo Vizzani. It is the results of this experience, which engaged the artist during the summer months, to be presented in the exhibition currently ongoing.

In addition to the room mentioned at the beginning, the forms in which this young artist’s inspiration takes shape are very different. A large ceiling window, for example, has been ensnared by a tangle of dry whiteweed, giving the impression of a nature that is never tamed, capable of taking up its space in every place, but itself by now lifeless. In the black and white image of a swimmer from the back we find lying on the ground, with the corners pierced by shiny chains, the desire for movement, for floating on a depth, however dark, is thus combined with extremely exhibited constraints, to the limit of the cruel.

The dark hue is also well recognizable in the series of particularly incisive nocturnal photos that Campestri took while spending nights in tents among brushwood and wild animals. Defoliated trees, ghostly, equivocal presences stand out whitish on a inky black background. Then we see a series of work (or torture?) tools, such as pliers and hammers, displayed next to pieces of brambles with threatening large sharp thorns. To pass between two different exhibition halls, one is then forced to make his way through a heavy curtain of chains, as if to make the visitor feel the inevitable material consistency of each real passage.

That everything leads in a single aesthetic direction is clear, at least as much as it is towards the dark that this direction is oriented. But it is precisely here that, perhaps, the talent of the artist is best expressed: in knowing how to deal with the imaginary of the arcane, of absence, but also of their overlying omnipresence with an elegance and intensity that not only make shiver or feel uncomfortable, but compel you to think. 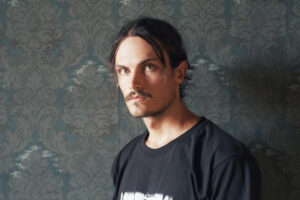 Luca Campestri, third and last artist under 30 – after Mattia Pajè and Bianca Zueneli – to take part in the second edition of the Alchemilla residences-studios 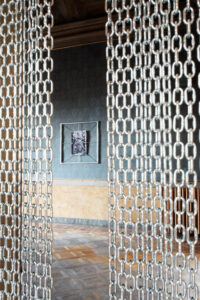