Many philosophical and current religions have always based their thoughts on a mysterious bond that links all things together, on an intimate relationship between the life of the spirit and nature, conceived as an immense animated organism: so matter becomes a manifestation of a spiritual world in which every rational distinction between elements falls. Everything appears animated by a single breath of life and things penetrate each other until they are consubstantial and indistinguishable. The innate awareness of this symbiotic bond between human and nature has nourished over the centuries, the feeling that kidnaps and annihilates every individual in the face of the vastness, the unspeakable nostalgia of the elsewhere settled in our heart, the desire to find in Nature the consolation to mortality and in the horizon the promise of a further dimension to which we will be able to enter in a later stage of existence.

The primary source of inspiration for the Iranian painter Hoonaz Afaghi (1973, Tehran) is nature, seen as an overwhelming and majestic, terrible, and fascinating force in which the human being dissolves and then finds himself. Her paintings do not reproduce a real landscape. Still, they are born from a montage of chromatic gradations and sketches of forms drawn from the real and transfigured so as not to represent the reality itself but the centrality of the human ego in the universe when it manages to harmonize with it. The paintings evoke soft indeterminacy of that mirage essence of universal landscapes whose memory resides in our unconscious, regardless of our origin in the world. Looking at Ballet (2019) for example, we can imagine a sandstorm in the desert, Nature (2019) makes us think of a winter mountain landscape in which the reflection of rocks remains stranded in a mirror of frozen water, while Slit (2019) reactivates the mental image of a tree trunk exposed to the weather try hard to resist dancing with the wind. These ancestral impressions, recalled on the canvas by quick abstract brushstrokes, intersect another level of meaning: looking carefully (in some paintings this aspect is more evident, in others more hidden) we see that every hint of figuration can always be read in two ways and the natural call is always mixed with an anthropomorphic allusion. Hoonaz Afaghi thus reveals her profound connection to nature, understood in its twofold value of superior divinity and consideration of human emotions. The initial sensory data, completely transfigured by a completely mental light and the artist’s feeling, takes on the value of an inner revelation, the real subject of the world’s constant transformation, and the extinction of its appearance.

The philosopher Immanuel Kant (1724-1804), the leading figure of the German Enlightenment who saw his philosophy as critical research on the conditions of knowledge, had pointed out that our experience of the world derives from our subjective faculties of education and the organization of our minds, with the consequence that we will never be able to know the reality, but only our impression of it. Perception. This concept was exaggerated by Johann Gottlieb Fichte (1762-1814), who even denies the existence of an absolute reality because, according to his philosophical thinking, there cannot exist a world separate from the one who perceives it. Hence the assumption that our knowledge is, in itself, a creative act and, as a direct consequence, a close link between perception and interiority and the attempt to regain a spiritual dimension through contemplation of nature, a privileged instrument capable of triggering a set of feelings in man that lead to his re-acquaintance.

The brush of Hoonaz Afaghi slides on the canvas to chase a drifting goddess in an attempt to transcend the particular nature data in a universal representation that requires the observer to identify and resonate. What makes her paintings so compelling is a reflection of the subject’s tensions in a painter universe where proportions and hierarchies are subject only to expression criteria, and the natural elements are evoked as a widespread and robust presence despite the dissolution of the figuration in color. The auscultation of nature is exercised as observation, admiration, and recollection waiting for a reflection that coincides with the intuition of a mystery, destined to remain secret, which is the same as the existence of man. We are not allowed to understand rationally; it is instead a perception, a recognition of something of our own in the infinite mutability of creation. It is neither mysticism nor sentimentalism, but the primordial impulse to reconnect with the origin of life. It is the feeling of glimpsing something that goes beyond, a mysterious beyond capable of welcoming in power all the visible manifestations of interiority. Contemplation of nature in art, as in life, is purification and an overcoming, it is a cathartic moment that preludes to a deeper understanding of the world and the self.

The pictorial process by which the artist synthesizes the natural forms, the human body and its invisible emotions in a single image can be compared to a philosophical reflection aimed at investigating that moral principle of life and intermediate between body and soul that connects the various manifestations of the existing and that makes them communicative and in part interchangeable. Everything is in constant transformation and looking at the paintings of Hoonaz Afaghi, we will never know if we are faced with a bark that welcomes in its knots human pain or a soul that becomes truncated and wooden to find peace and we will no longer be able to distinguish between the projection of a female profile in the elegant roughness of a mountain range and display of a feeling like rock, snow or sunset. There is no longer any separation between perception and interiority, while contemplation gives way to creation. 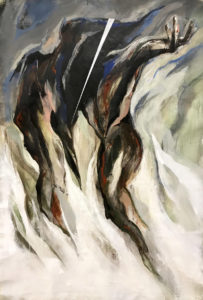 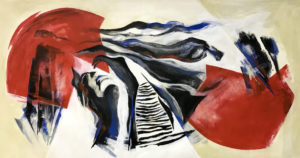 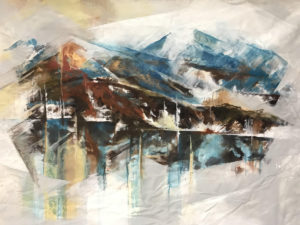 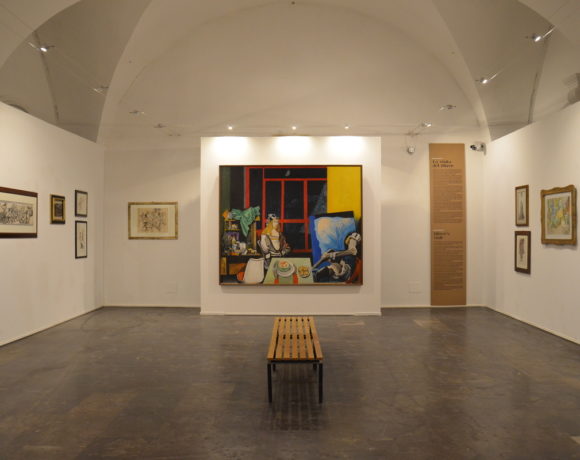 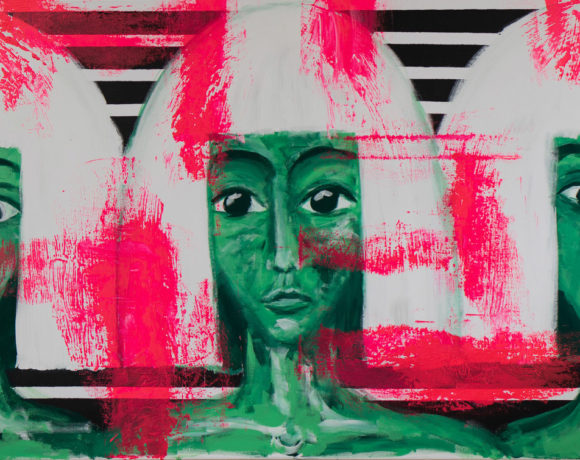 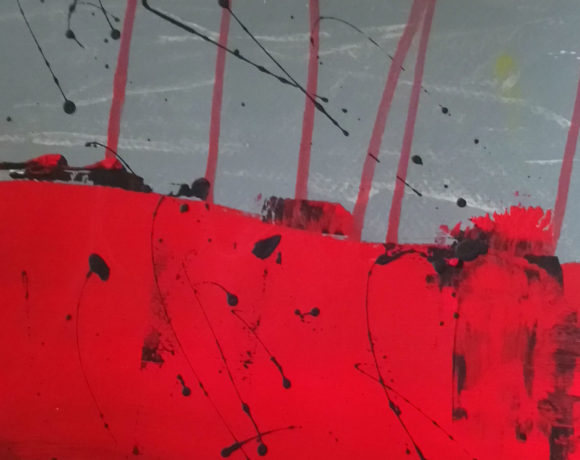