“Re-” as to restart. The A plus A gallery in Venice starts again with young artists

Re-, how to resume, be reborn; Re-, as a reworking of what has just passed. But above all how to return and reopen, renewed: this is the spirit of the A plus A gallery in Venice, which after the long lockdown period inaugurates a new exhibition in its spaces, with “the most excellent works of painters Giulio Malinverni, Maddalena Tesser and Bogdan Koshevoy”. They are three young artists united by a figurative language, who live and work in Venice, studying at the Academy of Fine Arts in Professor Carlo Di Raco’s Atelier F. Until September 20, 2020, the “unpublished paintings and sculptures for the rebirth and good fortune”, all made over the past few months, and whose painted surface reflects on one hand the lethargic and slowed down condition of the quarantine, and on the other, the desire for freedom and escape, dreamlike worlds and future visions of a post Covid-19 reality.

In the work of Giulio Malinverni (born in Vercelli in 1994) scenarios, landscapes and portraits are an explicit reference to Italian Renaissance painting (an iconographic imagery with which, explains the artist, he has long been in contact, coming from a family of artists and restorers and having studied as a restoration technician the frescoes and stone materials) whose literal references are however digested in an extremely personal way. Far from empty mannerism, the spaces represented are scenographies imbued with autobiographical experiences and references to current events, such as the reference to the exceptional tide that hit Venice in November 2019, present in the Buriana canvas. In Malinverni’s work (which this spring has the gift of ubiquity – present at the same time in the city with the solo show Giano di Giano, curated by Daniele Capra, and the collective exhibition I dreamed a dream, Chapter 2, curated by Domenico De Chirico, both at Marignana Arte gallery) realistic elements blend with a certain dose of surreality and a sense of humor (in Pelo di Primavera, for example, the strange floating presences are an allegory of the artist’s allergy to pollen). Dense is also the network of symbolic references, which here finds its maximum expression in Cassone del buon augurio – contemporary re-presentation of one of the most characteristic furnishing accessories of the Italian Renaissance tradition – with the narration of a life cycle that, starting from an initial condition of social isolation, ends with a happy rebirth.

The universe that Maddalena Tesser introduces in the gallery is instead populated exclusively by female figures: with Le Onde series, composed of numerous portraits made with mixed media on paper, just like in the eponymous novel by Virginia Woolf, each character appears isolated in its own soliloquy, to define its identity within the perimeter of the work. The many monochrome female portraits – nostalgic like old black and white photographs – parade before us one after the other, whose features are drawn from an archive of figures from the world of literature, from magazines and advertisements, from the history of art and from different cultural horizons. Hair is central, as an identifying and differentiating factor between the various historical periods represented, and which in the diptych R-umors returns to the protagonists as it happened at the time of Domenico Gnoli. The large magma canvas Atto I: Cauchemar, a sort of tableaux vivant with atmospheres of the sixties, steals the scene, whose figures appear isolated and waiting, immersed in a muffled time suspended from a domestic quarantine. Without dialogue, the young women seem to wait on the crimson background for the curtain that divides them from the outside world to stand aside, while that peacock in the background, perhaps, alludes precisely to a return to life.

Instead, the episodes of the dream world of Bogdan Koshevoy (born in Dnipro, Ukraine, in 1993) take place in suggestive open spaces, poised between the real and the fantastic. The only connection left with reality is the portrait of Ukrainian buildings, the common thread of the works on display, dreamy memory and homage of the artist to his hometown, Dnipro. The acidic landscapes, in the artificial tones of blue and green, are populated by small figures engaged in improbable actions – gestures no less enigmatic than those which we could perform in our deepest dreams. In Driver’s Education, a woman is bent to glaze the shore of a lake, while in Who goes slowly … (sort of version 2.0 of Kandinsky’s Der Blaue Reiter), the protagonist is a cowboy dismounted from his horse, trotting against the background of one strange fairy-tale realm. And again in Runner’s high, a group of people kicked off a bizarre running race, immersed in a nocturnal atmosphere dotted with mysterious flashes. In Banana Test, on the other hand, bathers celebrate the joy of life and the newfound freedom to soak in the psychedelic waters of a fountain; among these, there are those who too headlessly dive into the head, while someone else, in the opposite canvas, covers his eyes with his hand, so as not to see. 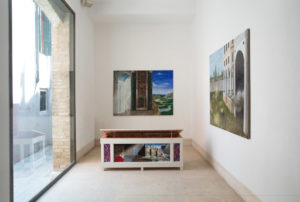 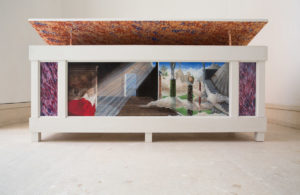 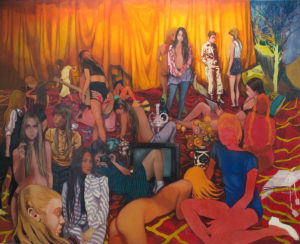 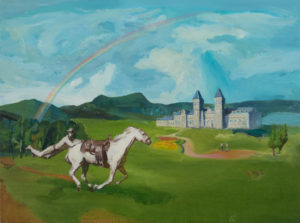