Who takes care of contemporary..

Linked to the sensations I was feeling now (…) these impressions would have strengthened, would have taken on the consistency of a particular type of pleasure, and almost a framework of existence that I had, moreover, rarely had the opportunity to find, but in which the awakening of memories placed in the materially perceived reality a fairly large part of reality evoked, thought, elusive. As Marcel Proust in La Recherce has been able to represent environments and situations through a dynamic subjectivity that makes the external world a symbol of inner reality, so Iva Lulashi (Tirana, 1988), now, together with Regina José Galindo, protagonist in Prometeo Gallery Ida Pisani, knows how to bring together in her pictorial gesture – which is imitation and creative act at the same time – two opposite and complementary movements: on the one hand, she crystallizes the beauty of the external world; on the other, the perception of reality is influenced by pictorial visions.

Elsa Barbieri: The acceleration of history corresponds to a multiplication of unforeseen events and to a bombardment of imaginative hints that give us an instant view of what is happening all over the world, while the individualization of the references increasingly places individual in the position of considering himself independent, interpreting by himself and for himself the information he receives from the outside. How do the concepts of “near” and “elsewhere” refer to these aspects in your artistic research?
Iva Lulashi: Near and elsewhere in my research are stages. There is an initial closeness when I choose the images followed by another phase that coincides with the detachment from them. It is a preparatory stage for me, during which I am putting aside the original influence in order to be able to insert something of my own. However, there is always something that I cannot detach from, something that I preserve, take and insert into the work as part of my personal experience.

Elsa Barbieri: How and which images do you choose?
Iva Lulashi: I start from keywords, of which I lose the memory in the detachment phase and then spontaneously emerge. The choice is rather random, the spots and colors attract me. At the beginning they have their own narrative, I collect them in folders, I let them get lost over time, settle down, get confused, and then I recover them, I work them, I change a detail to transfer a completely new meaning to the image. The same happens for titles. In a notebook I note words, non-visual frames, which I read or find, always by chance. I take them back when it’s time to associate them with a work, letting pictorial and semantic research, guided by impressions, merge. Precisely these impressions lead me to choose images that are basically reactions. One of the first reactions was nostalgia for a dark period, censored by the Albanian communist regime, which has left very deep roots in me and in my country.

Elsa Barbieri: How did this nostalgia translate into your artistic research?
Iva Lulashi: It certainly conditioned me, locking me in to a well-defined historical period. But it was precisely this that gave rise to a form of rebellion in which I gave an erotic tint, thanks to the fact that eroticism is one of the spheres that has been most censored. However, I could not ignore that the same form of censorship was exercised in other areas unrelated to communism in Albania. In a certain sense, all of us still live and undergo different forms of censorship and closure. This is how I revised religion as that field that conversed well with eroticism and politics, allowing me to create a sort of triangle that at the same time contained the attraction between these poles and released it outwards.

Elsa Barbieri: The exhibition is crossed by a shared identity, which you assume with Regina José Galindo, in the shape of a body: the body of the other, in your case, that you paint generating always new and unexpected aesthetic overlaps.
Iva Lulashi: True, I always use the body of others. Because for me a body means only a body among other bodies. Even nature and the atmosphere, are bodies, which merge with others when I transpose them on the canvas. It is not only the human body, it is the fusion between it and its surroundings. So I also mean sensuality and eroticism, as a union of human and atmospheric bodies.

Elsa Barbieri: The popular, sometimes dreamlike, scenes that you paint facilitate the intertwining of historical-cultural notions with moments of public and private life widely transmitted and shared in contemporary society. By doing this you make the viewer be an active part in the artistic process because, through contemplation, not only he finds himself recognizing real things, but he invents new ones. Is this the reason why you always paint the moment immediately before or after the action?
Iva Lulashi: Yes. The moment I am most interested in for stopping it on the canvas is the suspended one. I don’t want to send direct messages, I prefer that the narrative remains rather vague. This allows me to see the reaction of the spectator in front of my works and to understand his preferences. Because behind it there is always a personal reason, a memory that perhaps does not have a shape but that the image makes him remember involuntarily.

Now that the references of identification are so fluctuating, the individual production of meaning is more necessary than ever. Compared to the spaces where millions of individuals meet without ever entering into a relationship, driven by the frenetic desire to consume, to speed up daily operations or to access a real or symbolic change, Iva Lulashi’s skill in providing images that are interpretations of individual stories explicitly implicated in collective history, contributes to concretizing Vicino Altrove (Near Elsewhere ) as an anthropological place that acts as a principle of meaning for those who live in it and as a principle of intelligibility for those who observe it. 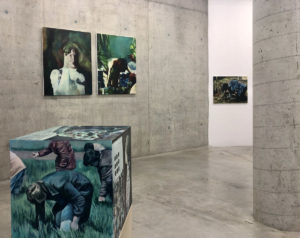 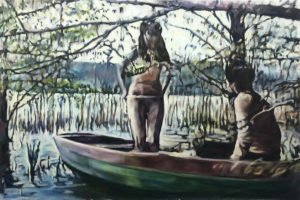 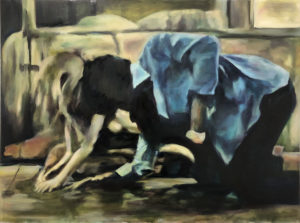 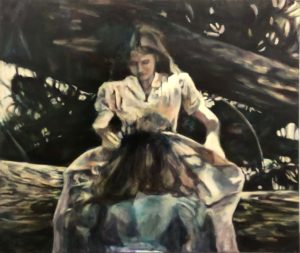