Francis Alÿs in Losanna at MCB..

In the air, around the world, there is a lot of talk about graffiti and murals, but not only: we are also witnessing an evident growth of images distributed in the urban circuit, as if to contrast that sense of gray and of sadness profuse by so many empty walls of condominiums. These are (generally large) images created both in terms of authorized interventions (such as the one painted by Gabriele Bonato and created in Trieste as part of the Chromopolis project, with the contribution of the Pittini Foundation) and with illegal or clandestine operations (see for example Banksy who has made his specific flag of transgression and anonymity). Graffiti, born as an “aesthetic” phenomenon many decades ago, found in Keith Haring a particular performer. A great interpreter, without a shadow of a doubt, because he was guided by the desire to deliver his message of fraternity and love to the widest and most varied public (in a very democratic and all-encompassing vision). Haring has never used the spray can and all his work, certainly very cheerful and colorful, has always been marked by a dry and strong sign. This ended up also typifying his figures in an unusual way, that is his narrations, intertwined on several levels, but always devoid of any depth.

Haring was born in 1958 in Reading (Pennsylvania) and he learned the first rudiments of his drawing from his father. After attending the Pittsburgh School of Art, he moved to New York and in 1978 he enrolled in the School of Visual Arts. In those years he began to occupy the subway advertising panels that he saw unused. The drawing is fast, the line is marked. He started with the white of the chalk and then moved on to the black marker. The message can be read at a glance and the style becomes perfectly recognizable, so much so that Tony Shafrazi includes him in the exhibition program of his Soho gallery. In 1982 Haring held his first major exhibition and the vernissage was attended by Andy Warhol, Roy Lichtenstein, Robert Rauschenberg and Sol LeWitt. At the age of 24, Haring was invited to Japan and his fame began to spread. He not only creates large sculptures for public spaces, but also murals for nightclubs and children’s hospitals around the world. In this way his testimonies become lasting: they remain in the duration of a subsequent glance. Much of his art contains political messages related to AIDS, drugs and apartheid. Haring takes sides personally, also because of his life choices and declared homosexuality. “The Radiant Child” and “The Barking Dog” become true icons, in addition to pierced hearts, angels and dancing bodies. Of course, the phenomenon was very widespread: just think of Basquiat (who before rising to glory signed his artworks with the initials Samo, but it is also correct to remember Futura 2000 and Fab 5 Freddy, up to Douglas Abdell, a strange graffiti sculptor artist. It is very important to underline that in Haring’s nature there is no elitist arrogance aspect and that his idea of “an art is for everyone” is not a simple slogan, but a truth rooted in his soul, a truth that then spreads until it touches (at a distance of kilometers and light years in terms of age and education) even in the choices and methods of an artist like Laurina Paperina. Here is, then, a production that overflows: graphics, posters, carpets, record covers, t-shirts, covering with his synthetic sign even the bodies of models or any surface. The author’s thought hides an idea of ​​redemption and rebirth: “My hope is that one day, the kids who spend their time on the street will get used to being surrounded by art and that they can feel at ease if they go to a museum “.

Now, Keith Haring’s work returns to the limelight with the tribute that Palazzo Blu in Pisa dedicates to him and the appointment does not sound unusual, given that the author, in Pisa, had stayed in 1989 to paint on a wall of the convent of S. Antonio, the famous mural ‘Tuttomondo”. That project was born from a completely casual meeting, which took place in New York in 1987 between the artist and the young student Piergiorgio Castellani: the student proposed to Haring to create something “large and stable” in Italy and the artist accepted: it was so that the Keith Haring Italian Project took shape, a monumental painting, a hymn to joy, which covers a 180 square meters area​​. The exhibition at Palazzo Blu, signed by Kaoru Yanase, was created by the Pisa Foundation in collaboration one with MondoMostre and with the extraordinary participation of the Nakamura Keith Haring Collection. The exhibition presents for the first time in Europe a selection of works, more than one hundred and seventy, from the Nakamura Keith Haring Collection, the personal collection of Kazuo Nakamura, which is located in the museum dedicated to the artist, in Japan. On display in Pisa there are works ranging from the first period of Haring to the last, many complete series such as Apocalypse (1988), Flowers, (1990) and various other drawings, sculptures as well as large works on canvas such as Untitled (1985). The exhibition traces Haring’s entire artistic career and the wide range of expressive techniques he investigated – painting, drawing, sculpture, video, murals, public and commercial art – starting with the drawings in the subway, Subway Drawings, 1981-1983 (white chalk / paper / wooden panels) which remain among his best known and acclaimed works, up to the portfolio of seventeen screenprints entitled The Bluprint Drawings, his latest series on paper that reproduces the first and purest visual narratives born in 1981, published in 1990, a month before his death.

Keith Haring (the third from the left) with assistants, during the execution of the mural painting “Tuttomondo”, Pisa 1989, © Photo Daniela Meucci, Collezione Cineclub Arsenale 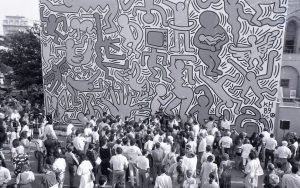 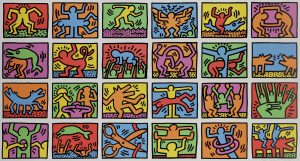 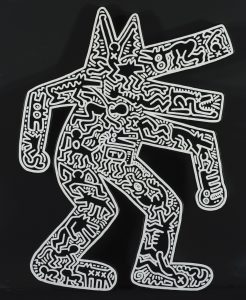 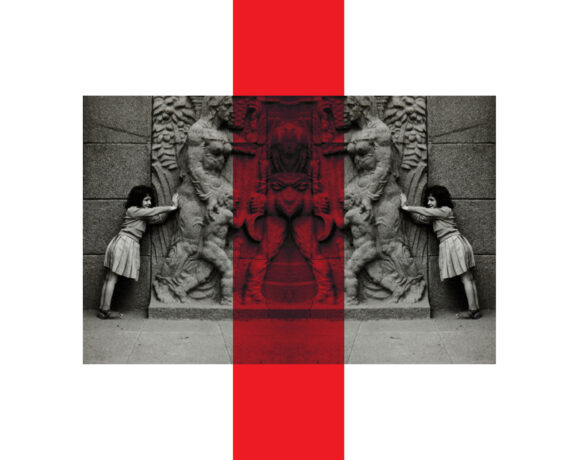 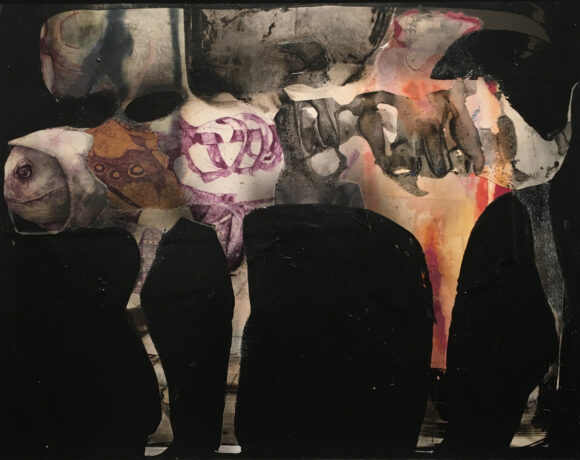 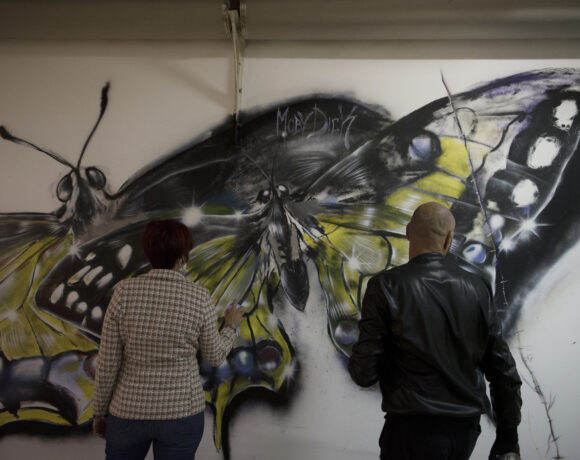