Liu Ye at Fondazione Prada. A painting is just a v...

Liu Ye at Fondazione Prada. A painting is just a vessel

China has recently made itself known for everything but its painters. Liu Ye’s exhibition (born in Beijing 1964), inaugurated on January 30, that is shortly before the outbreak of the virus in Italy, recalls a cultural encounter between the Asian and western world. Just as director Wong Kar Wai associates Asian shots with American background music in the “Chungking Express” (1994) and his other films, Liu Ye manages to convey two such different cultures in one painting. The artist’s solo show at the Nord gallery of the Milanese Prada Foundation is curated by Udo Kittelmann, a German curator, who in fact underlines a feeling of unexpected familiarity transmitted by Ye’s works. The curious mixture of cultural approaches is so unique that it becomes the precious value in itself.

Liu Ye grew up during the Cultural Revolution. However, unlike many other artists, his works have few political implications. “I’m interested more in the language of painting. And art. A thousand years ago, there was a terrible political system, but there was still good art. Of course, I have my political ideas, but that’s my politics; my art is my art. Art is not a weapon” – he says. A selection of 35 paintings created since 1992, to be seen until the end of September, explores the artist’s inspiration deriving from complex narratives, art history, literature, and popular culture, like his favorite cartoon character – Miffy the bunny. Ye is equally moved by Van Eyck, Vermeer, Mondrian and Dick Bruna (https://vimeo.com/148152046) and by the painting of Song Dynasty and Yuan Dynasty (artists such as Ni Zan and Huang Gongwang). In Liu Ye’s perspective “in Chinese art, one never goes absolutely abstract”. On the other hand, Mondrian’s approach “is more a belief, almost religion, than a game with art”. (https://www.youtube.com/watch?v=s_Z8-mRMIX8) The artist finds both optics valid for his work. He paints while listening to Bach’s music.

In the oil painting “Spirit of the Sea” (1997) we find a shortcut of Ye’s typical themes – a tribute to Piet Mondrian, sailor hats, angel wings, and characters depicted in a childish style. Despite the repeatable figures, the artist believes that “the subject of the painting is not important for a painter”, and that by restricting the number of objects, it actually makes painter’s communication more effective. Ye fears of being held back by a certain object or his general style. He doesn’t want to be attributed to any “-ism”. (https://vimeo.com/148152046) Asked to explain the symbolism behind the objects on the paintings, as in “Book Painting 3” (2014) or “Book Painting No. 6” (2014 – 2015), he replies “I think it’s nothing more than a book. (…) The meaning of the object doesn’t have much importance, however, its shape, architecture, music, are irresistible characteristics for me”. (https://vimeo.com/148152046)

“When I draw a bamboo, it was not based on bamboo’s symbolic meanings in traditional Chinese culture, but on the fact that a bamboo’s shape met my expressive needs at a time, it was what I needed to paint.” (https://vimeo.com/148152046) In an enormous (6×9 meters) work “Bamboo Bamboo Broadway” (2012), the artist attracted by the straight lines and pictorial composition of this plant, connects his works to the European past, referring to Mondrian’s painting “Broadway Boogie Woogie” (1942–1943). The canvases hung in a grid, recall Bauhaus architecture, at the same time invoking a Mondrian’s spatial organization. “The repetition of similar forms and tones offers the pictorial equivalent of a fugue”. (https://www.speronewestwater.com/exhibitions/liu-ye/installations)

“Liu Ye creates his pictures in the same way that, in our dreams, we create an image of the forces that do battle and seek equilibrium within us. For me, at times, some of Liu Ye’s pictures approach the fulfillment of a rarely satisfied longing for the <one true picture>”- Kittelmann writes in the catalog. “I pursue works that are more fundamental, timeless, and able to sink into the subconscious mind” – declares the artist. (https://www.christies.com/features/A-Journey-Through-Asian -Contemporary-Art-and-Chinese-Japanese-Artists-6101-3.aspx).

At Fondazione Prada, industrial architecture and monochromatic concrete walls give a precious background to the subtlety, intense and vivid colors, and powerful internal organization of Ye’s paintings. It would be ungrateful to agree that, in the case of artistic works, the public must fill the vase given by the artist with their own perceptions, as Ye believes. His paintings give us so much more than inspiration and guidance. They are mesmerizing and enthralling, they take us out of this world. But not out to China. In a non-existent and fascinating country created by the well-defined artistic personality of Liu Ye. 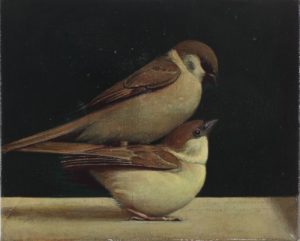 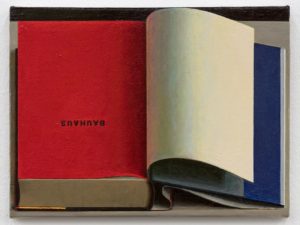 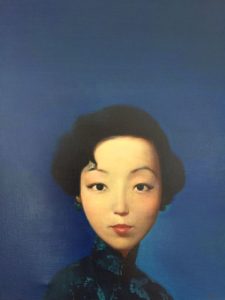