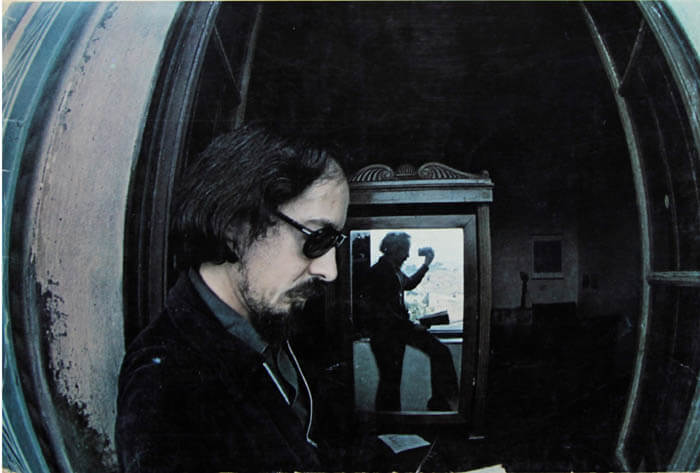 On my intensive and constructive engagement with Luca Maria Patella, which dates back to 1965, I would have much to say in addition to what I have already published, but for this review I will touch only some innovative aspects that connote his multiforme production. I refer, in particular, to the interdisciplinarity (that he has been practicing and obsessively declaring since the 1960s), to the complexity (which gives him the opportunity to be in the globality of socio-cultural phenomena), to the continuous experimentation of expressive forms, to the interaction, to conceptual and behavioral anticipations, to the ingenious use of various media (manuals and technology). All explorations that arise from a natural talent, from classical and modern cultures, from psychoanalytical analyzes, from the pleasure to invent and from the urgency of propagating operating modes to the height of times. Patella has been able to do many different things, perhaps because he has favored an endless research, giving the creative object an authoritative identity. And, by wisely combining the specificities of various disciplines, he has expanded the linguistic possibilities and the purposes of art.
Luca is an intuitive and inventive thinker, in a constant creative tension. Thanks to his unusual training, he is also interested in literature, psychology and science, never dissociated from human values, to deeply combine the individual to the world. He speculates on everything by exploiting every personal resource. With his “strategic art”, implemented with actions, theoretical and didactic indications, he promotes cultural emancipation. His making is so vast and circular that it would deserves a systematic study to show its various reasons, although it is not easy or lawful to dissect his “Logique du Tout”, still in evolution, since he follows the dynamics of an in becoming reality and of mental processes, and often re-elaborates ideas to discover more authentic truths.

Part of this “logic” is the exhibition at Bulian Gallery in Milan Luca Maria Patella autoEncyclopédie: “la Scrittura” – curated by Marco Scotini with the active collaboration of the exhibitor space patron – that Patella himself described: «In Milano are mostly shown hand-painted works, engraved, with simultaneous colors and mirror that reflects, in two directions – Tondi Cosmici (my father’s cartographies) – Then, “Scritture Enantiodromiche”, colored and original (= the race of opposites, scratching: one towards the center, the other, upside down, towards the periphery). And, some photographs, “books-work” (of the 70s) and “dream books”, illustrated. There is also something about “Terre Animate” (’65) – Spring 1967, “A key-work”, op! with Claudio Meldolesi (my cousin, became Historian of Theater at DAMS in Bologna), and Rosa Foschi (my wife) as post-quem.» It should be remembered that at the beginning Luca has been devoted, with passion and experimental spirit, to engraving by attending the William Heyter atelier in Paris. Later, after carrying out other significant experiences including the writing of novels and poems, he made (also with my complicity) distinct replicas (more unique than serial) with photographic images, his or found, and subjective processes. At that stage, he composed works as places for drawn texts that entered the frame with new forms and contents. He was so excited about the literary inclination, able to instantly translate the thought, not to be more abstract but to build a new image from the plastic valor, to overcome the already seen and make interact the visual arts with literature, while exalting communication. He was writing on paper, slab, crystal or mirror, even in three-dimensional, environmental, multimedia and performative works. In this context he made the round mirrors with spiral calligraphy, began in 1974, when I obtained a cutter from a dentist, which he still uses as an “electric pen”, a tool which, among other things, allows him to emphasize the graphic narrative and the manual wisdom.

About the auto-encyclopédie of the Milanese exhibition it should be said that the most qualitative activity of Patella’s multidisciplinary, psychoanalytic and theoretical-critical course has developed from studies on the literary work of Denis Diderot but also from Duchamp’s conceptual work, as it involved self-implications, on emotional, psychological and cultural issues also present in himself. From there the results were “more free and emotional, but always subject to the domain of expression and, therefore, of form” [L. Marucci-L. M. Patella, “Intervista continua…”, 1990 (which deserves to be printed)]. In other words, Patella, like Diderot, does not have one shirt for his body, much less that of “force” imposed by conventions. But here I let him speak to give other explanations:

Luca, I think that your Milanese exhibition has the merit of proposing anew an important chapter of your heterogeneous production, as writing apart from having an autonomous value, is present in different forms in many other works and had some development in your last experiences.
In the exhibition, with Laura Bulian, etc .: we will publish the No. 22 of the “Gazzetta Ufficiale & Ufficiosa di L. M. P .” which will have the title:“Orelogio Cosmico & Calligrafia” with my writings and by M. Scotini. Forgive me, but a certain Psychology: it speaks of “Identification” (as well as of relationship). I also realized that it is the sixty-one anniversary of my psychological knowledge […]. The scientific-structural knowledge is still ahead. In [Latin] America I became young assistant of the young Nobel Prize winner: Linus Pauling. Then, Paris… Europe, and like Luciano well knows (!): after a long struggle with myself, I chose to be an artist (which I already was): a science-art (not deterministic), psychological , Linguistic (and political, as seen in so many “simultaneous color engravings” of that period, exhibited in Milan)…

The re-reading of Diderot’s work is also part of the “Patella system” based on the psychoanalytic linguistic experimentation and the interdisciplinarity of which you have been a paladin since the years when specificity dominated. Today, when in visual arts contaminations and hybridizations have been legitimate with expressive forms of other genres, what do you feel personally and from the most objective cultural side?
If I saw “things” that made “useless” my doing and thinking, I would stop. This is not the case: I continue to practice the complexity of becoming (which is not at all good … even if Ovidius already talked about it, or Dante practiced it etc.). In becoming: between Consciousness & Unconscious. Although I do not propose at all myself an exemplum of life. All the other! I am, however, against the “circumcision”, psychological and social. Finally, either in the beginning or anywhere (ovum unquam: finally a… “rotundun of… trans-formation”). But (with my own and our presumption): we realize (or not ?!) that Earth, in the Cosmos, is …. Infinitely irrelevant ?! …

Luca once again had the opportunity to show himself with skillful spins of words, showing that at least for him, scriptural language has no boundaries: it is a medium that offers the opportunity to condense more meanings, to ironize and insinuate, to intrude a number of literate quotes and personal memories. In short, one can say that Patella is a problematic and dialectical artist; that he has no space-time limits are and is not influenced, because he is interested to be everywhere with all that he has and is worthy of being perceived outside, in order to contaminate with classicism the contemporary and to aspire to a future not restrained by retrograde visions, inhabited by the “L’ARTE CHE NON C’È” or by the “ARTE & NON ARTE”, which he theorized and experienced. 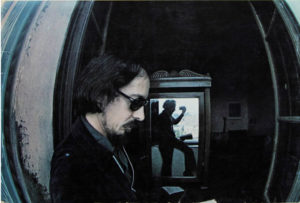 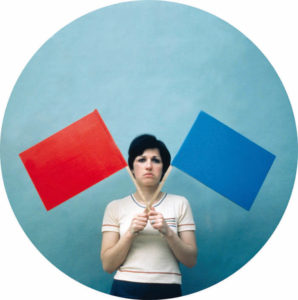 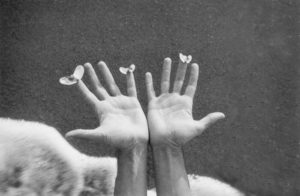 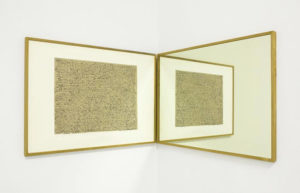 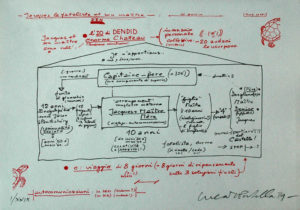 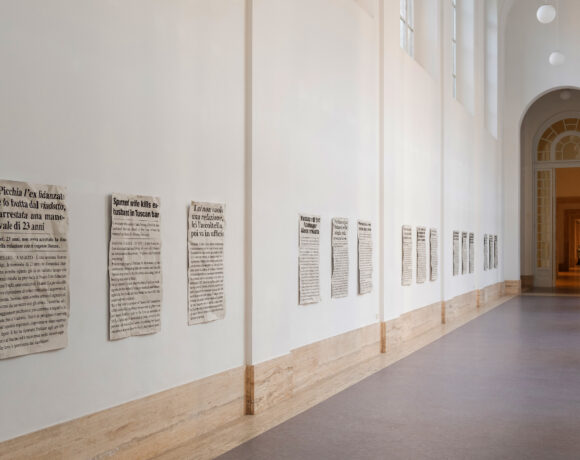 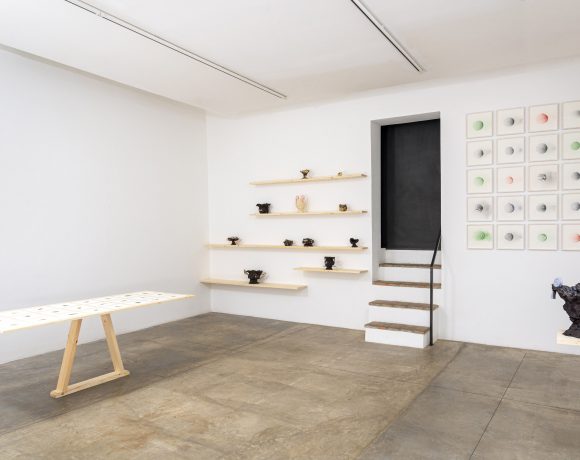