In conversation with Carrie Ab..

“The laboratory of the future” is the fixed theme for the next edition of the 18th International Architecture Exhibition / Venice Biennale and the central exhibition will be signed by Lesley Lokko, Scottish writer and architect with Ghanaian citizenship. The focal point of this project centers on the African continent, precisely because it is seen as a concrete laboratory of hypothesis for the future. The reasons for this reasoning can be summarized as it follows: the average age of its population is half that of Europe and the United States; Africa has the highest urbanization rate in the world (almost 4%); it is the continent with the lowest vaccination rate (15%), but with the lowest number of deaths; the diaspora and the transatlantic slave trade is the ground on which, nowadsys, the struggles for civil rights are founded.

This premise allows us to talk about the exhibition conceived by Michael Armitage for the Kunsthalle Basel and to some extent also about the great attention that the Western world is showing towards diversity and inequality, perhaps to wash its conscience from previous colonial abuse and racist or cultural supremacy ambitions that have led to genocides and ethnic erasures of which, in truth, the end is not yet in sight. Recently, the most foolish of these visions has been the claim to think that democracy (as a system of civil coexistence) could be exported or that it could be welcomed with open arms into social systems rooted in tribality and the millennial tradition of patriarchal systems and male chauvinists.

Michael Armitage (born in 1984 in Nairobi, lives between London and Nairobi) speaks to us through a “figurative” painting whose formal characteristics are extravagance, multiple atmospheres, layered surfaces, the intertwining of past and current events, drawn from memory and from mythology, as well as from pop culture and historical-artistic references. This leads to haunting and provocative reflections on politics, history, civil disobedience and humanity. But the snare launched to history does not reach Phidias or Polykleitos, it does not speak of Pericles or Caesar, but of the legendary tenth daughter of the founding father of the Gĩkũyũ people from East Africa. The Warigia work is dated 2022, so it is a wholly imaginative representation that is rooted in a process of identification and cultural redemption. A work of great effectiveness, without any doubt, but which obviously recalls other paintings: it is the depicted protagonist who makes it different. For example, the Dormice (a trio of painters completely forgotten today) not many years ago spoke of a sweetened and fashionable world, while here we speak of a population which suffered the slaps of history. In short, here there is a non-secondary aspect of criticism or accusation that is not so much implied. Also in another work (Head of Koitatel, 2021) the complaint is skin deep: a severed head lies on a lawn. The cue is taken from the beheading, in 1905, of Koitalel Arap Samoei, political and spiritual leader of the Nandi people in East Africa. The brutal killing was caused by the British colonial forces as this leader had opposed the railway expansion. The way of composing, although based on notes taken even with the camera and only later translated into painting, inside the studio, is based on the method of Édouard Manet, who composed his stories based on models, but misleading the details or the context, all in order to create an effective and convincing narrative.

This as regards the way of composing, but an aspect that is not secondary is the surface on which the author puts together his stories and which has an explicit reference to the African heritage. The surface of the canvas is replaced by Lubugo bark cloth, a cloth made by the Baganda people from southern Uganda. Coming from a fig tree, this material, in order to become cloth, undergoes a laborious process: under the rough outer skin of the tree, an inner layer of bark is peeled off, burned with banana leaves, soaked, softened with club blows, dried and stitched together, irregularly and even revealing cracks and holes. The choice of this material is, conceptually, fundamental: used in Ugandan ritual contexts, Lubugo, which means “funeral fabric”, ensures an evocation of death and, together with it, of love and loss, which arches under every else. Finally, despite the extraordinary power of representation of these works, due to this artisan process nal, it is the holes that prevail over the painted mass: each of these holes is in some way a wound, but can be read as an opening, an orifice or a portal. There is a galaxy of holes, surrounded by clearly sewn seams and raised like scars on a painted body. This, together with the wrinkling of the paintings, all the more evocative of damaged and hastily repaired skin, prevents any sense of serenity or ease on the part of the beholder. The holes and tears complicate the image, sometimes interrupting it; in others they are the decisive aspect. These gaps are as visual as they are visceral, throbbing through and against the painted image. In the flickering surfaces, the artist doubles the anxiety inherent in his narratives.

You can feel it, in a spectacular way, in this body of works, painted in the last three years for this great exhibition at the Kunsthalle in Basel, a beautiful exhibition signed by Elena Filipovic and supported by the White Cube gallery. Afterwards, from 16 September, Kunsthalle Basel will host the Daniel Turner exhibition. 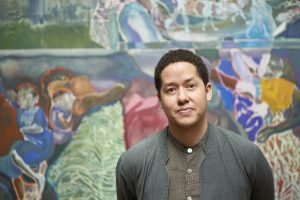 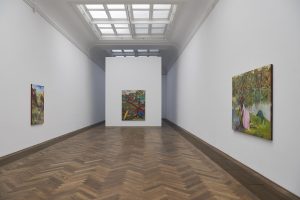 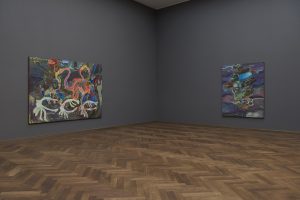 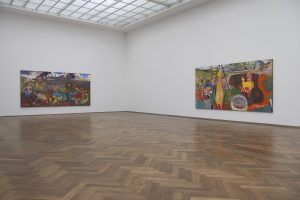 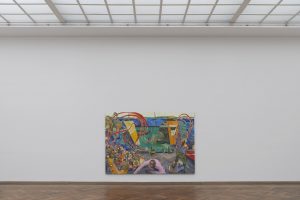