“Miracle Marathon” at the Serpentine Gallery

“Miracle Marathon” at the Serpentine Gallery 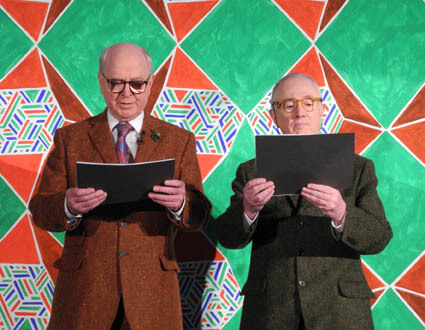 In Europe, after the Basel week in summer, for the number and quality of events, undoubtedly comes the autumn event in London which, apart from the valuable main section of the Frieze Art Fair, get excellent artistic level occasions. Last October, among those of the institutions, it is worth mentioning: the huge installation Anywhen by Philippe Parreno at the Turbine Hall of the Tate Modern; the composite Tick Time by William Kentridge at the Whitechapel Gallery; Miracle Marathon at the Serpentine Gallery, an interdisciplinary event curated by Hans Ulrich Obrist – with the help of the artist Sophia Al-Maria, the theorist Mark Cousins, the mathematician Marcus du Sautoy, the writer Andrew O’Hagan – and conducted by an eﬃciency staﬀ composed by Lucia Pietroiusti, Ben Vickers, Claude Adjil and various technicians. Obrist is rightly considered the most active, dynamic and updated operator in contemporary art. He is not a traditional critic, but a hybrid ﬁgure that combines multiple roles giving answers to the modern requirements of the international cultural system; is a discoverer of pioneering experiences of the past and emerging talents of each place; a researcher who acquires knowledge promptly, even from interviews with personalities from diﬀerent ﬁelds, who processes and transmits to the community through public discussions, unpublished books and exhibition formats, in a progressive vision of creative, activist and experimental practices, not by case he is the ﬁrst in the top place of this year’s Power 100 list, published by “ArtReview”. The last Marathon – induced by the general crisis, which requires analysis, illuminating ideas, expertise and global, as well as projects – continued, consistently, the action of the previous: Extinction Marathon and Transformation Marathon, which identiﬁed the social problems and environmental impacts of the present and the opportunities for change. Over two days, at the pavilion designed by Zaha Hadid (with a stage designed by Navine G. Khan and Sophia Al-Maria, made up of geometric abstractions, by the bright colors, which allude to possible itineraries) and in the Second Home (seat of Radio Serpentine animated by musical avant-garde interludes), about ninety professionals (artists, architects, writers, musicians, anthropologists, philosophers, theologians, scientists…) highlighted the issues of the ‘miracle’ in the secular sense, always with an eye to the future. Have given space (live, on video and radio) to constructive contributions, theoretical and demonstrative, to knowledge synergies, not to mention interactive performance capable of keeping alive, until late, the attention of many spectators, mostly young. Therefore, all actions taken with trespassing in the art and science of the imaginary territories, with an accentuated evolutionary spirit. A few examples: the artists Gilbert & George, in a verbal ping pong, have declaimed the text Fuckosophy for all, inspired by a popular philosophy created because, in positive or negative sense, can be understood by common people; Italian Riccardo Sabatini (expert in physics and quantum mechanics, which operates in California with the famous Craig Venter) spoke of the beneﬁts that would arise from studies of the genetic code; the artist Christo, with youthful verve, described his latest project The Floating Piers, which allowed to ‘walk’ on the waters of Lake Iseo; Etel Adnan (by video) recalled that the human species has never been in danger and that should give the aim of directing the collective energies to continue the miracle of life on our planet; Marcus du Sautoy (Professor of Science and Mathematics at Oxford University) has involved the audience in a game of chance in the universe of numbers; Mark Cousins (professor at Southeastern University in Nanjing) has compared religious miracles and wonders “without God,” derived from science, wrongly, often judged superﬁcially; Kumi Naidoo (South African activist, Greenpeace director for Africa) supported the need to unify ideologically his continent to claim a better future in peace, prosperity and dignity; the artist Romuald Hazoumé of Benin has revisited the rituals of his country showing a movie on tribal dances; Genesis P-Orridge (video artist, pioneer of psychedelic rock music) focused on human behavior, real world viruses, declaring that wars, diseases, lack of supportive and compassionate love will lead us to self-destruction; the sculptor Adrián Villar Rojas, in the unusual role of performer, exhibited virtuous modulation of his voice as a pure means of expression; the specialist in neuroscience Kris de Meyer, the researcher of the cognitive processes of the brain John Dylan Haynes and the geneticist Aarathi Prasad have been discussing with neuroscientist Daniel Glaser on the virgin birth in humans that begins to be a scientiﬁc miracle; Tomás Saraceno, in conversation with Jan Beccaloni (curator of the collection Arachnida, Myriaphoda, Tardigrada and Onychophora), explained the genesis of his plastic realizations between terrestrial and outer space; Neil McGregor (former director of the National Gallery) and the writer and essayist Andrew O’Hagan have interpreted Jesus’ miracles depicted in the paintings of classicism. Finally, deserve at least to be mentioned: the Nigerian writer Igoni Barrett, the young philosopher from Sicily Federico Campagna, the expert on cinema and literature of the Black Diaspora Manthia Diawara, the researcher on biosphere Kathelin Gray, architect Eyal Weizman, the historian of science Simon Schaﬀer.

During a break of the second day I was able to interview the friend HUO who from 2010 often collaborates with my articles focused primarily on innovative processes of art today linked to the social reality.

Luciano Marucci: What is the ideal or concrete contribution that Miracle Marathon, that you curated, wants to give to the real world? And, if aesthetic and social innovation can live together, what is the role of art in the current general crisis?
Hans Ulrich Obrist: The theme of the ‘miracle’ was born talking to Sophia Al-Maria. Because today there are many artists who are connected with the magic, the sacred, it felt important to bring together certain approaches. The world is in a time of great dystrophy and the art, once more, is the beginning of hope. The German philosopher Ernst Bloch said that art is the highest form of hope. And Mark Cousins (our advisor in this circumstance) pointed out that Miracle Marathon does not develop in a religious context, but outside. This was the idea, and as we read in the work of the nineties by Douglas Gordon that we installed at the entrance, I still believe in miracles, for two days here in London we have proposed a polyphony of ‘miracles’.

Is it possible to imagine future scenarios through the creative activity of visual operators civilly committed or others who practice diﬀerent disciplines such as those involved in this Marathon?
I have always believed that, as curators, we can not predict the future of art, but we can talk to the artists who have sensitive antennae to do it before others. As you know, I also wrote a book, The future will be …, and has been asked a hundred artists how they see the future. Speaking of the future, we can also talk about extreme present. With Douglas Coupland and Shumon Basar I wrote the book The Age of Earthquakes. A Guide to the Extreme Present [Penguin] and I think that throughout this process we were inspired by poet Etel Adnan, who has 91 years, and that makes us so much courage. Etel is Lebanese and last summer we set up an exhibition at the Serpentine. She wrote a beautiful text. I’ll let you try … [in the meantime to continue the dialogue, he draws on an A4 sheet one of his typical scores]. On Instagram you can ﬁnd many writings of artists. I found the movement against the dispersion of handwriting and every day I put on the internet new post-it autographs. To return to the theme of the miracle, even Sophia Al-Maria wrote an interesting text [The Unblinding].

New technologies can stimulate the imagination and also promote the artistic invention?
At the Serpentine we now have a digital curator, James Bridle, and yesterday unveiled his Cloud Index, the third Serpentine Digital Commission, atlas of clouds, the instrument as a parallel reality of Marathons and exhibitions in our galleries. Once you start, you do not stop anymore because, while the exhibition lasts two to three months, the new digital works are algorithms that develop, grow through time and not have a beginning and an end. The artist Jan Cheng makes works that begin with basic but, as dynamic systems, grow, are in crisis, decrease, then grow again, and every time you look at them they appear changed.

Even Philippe Parreno (this morning I was able to visit his ﬁlm installation at the Turbine Hall of the Tate Modern) has come to this.
Yes, but in a diﬀerent way. In 2011, I dedicated to his work an exhibition here at the Serpentine and two years before with him I organized collective show Il tempo del postino. He is a great friend, one of the artists with whom I am in better dialogue. Starting from Rauschenberg, he managed to reintroduce the time in the art. From the exhibition held in Paris in 2013 [Anywhere, Anywhen out the world, Palais de Tokyo] started to write scores according to which the exhibition develops, diﬀerently from digital algorithms: he uses biological processes; the bacteria decide how to develop the work. In a gallery, the bacteria decided on video, however, the video at Tate decided on bacteria. So there is no diﬀerence between Jan Cheng and Parreno, but in both cases the trend is that the work lives; the work is not stopped.

It is related to time, its transformations …
That’s right!

According to you, even other operating techniques can stimulate the creative process?
Of course! For example, Sophia Al-Maria, one of the most prodigious artists of the world, uses technology as a tools box, a box of tools to produce reality. She held an exhibition at the Whitney in New York and now is at Miracle Marathon.

How does Tino Sehgal intervene in the extraordinary installation of Parreno at the Turbine Hall?
Years ago I presented Parreno to Tino and they have become friends. Now often collaborate. Parreno does intervene Sehgal in his exhibitions, including the one in London, and vice versa. In two days Sehgal will inaugurate an exhibition at the Palais de Tokyo in Paris and there will see Parreno as well. Marcel Duchamp in 1953 said: “A guest + a host = a gost”. It is the idea of the exhibition in the exhibition; the concept of matryoshka. I have always believed in this, so at the Marathon I could involve the artist Sophia Al-Maria and the writer and essayist Andrew O’Hagan, that you’ve heard talking of Miracles and Lies; to call artists, writers, philosophers, scientists … We must not forget that ours is the century of parallel realities, of archipelagos, as I told you before. Three Moments (Duration 2′ 32”) of the performance by Gilbert & George made on October 8, 2016 at the Serpentine Sackler Gallery in London as part of “Miracle Marathon” Four fragments (duration 2′ 13”) of Genesis P-Orridge visual-sound intervention, “Miracle Marathon”, Sackler Serpentine Gallery, London, 8 October 2016 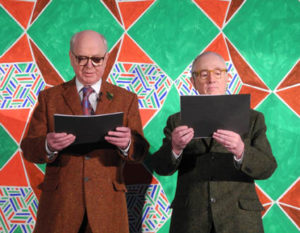 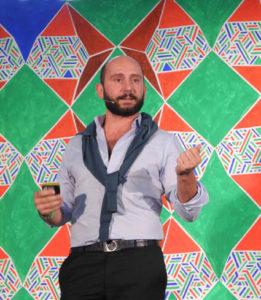 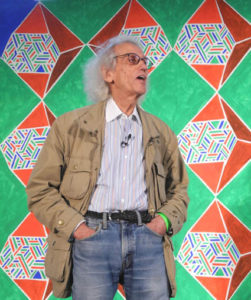 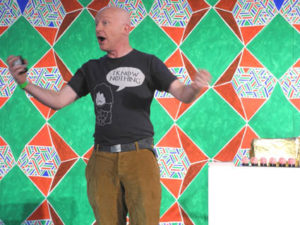 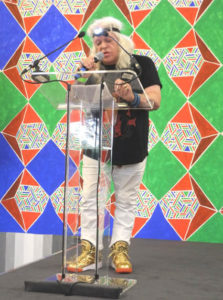 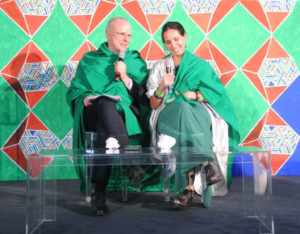