Nataša Kos. The soft and the indistinct

The person and the manifold co..

Nataša Kos. The soft and the indistinct

Friday 8 November 2019, 6.00 pm, at the Museum of Modern Art Ugo Carà in Muggia will open the exhibition “Heralds of history” with the works of Nataša Kos and Giovanni Pulze. The exhibition is organized by the Department of Culture of the Municipality within the PRACC project that the municipal administration launched in 2007. We talk about this exhibition and her work with the photographer Nataša Kos.

We begin with a brief biography…
I was born in 1971 and I started with the language of photography by chance, a few years ago, when I had my first real camera. My first one man show, titled “On My Way”, was in 2014 at the Galerija Murska Sobota. This was followed the following year by participation in the National Biennial of Slovenian Photographers at the Kosovo Jesenice Manor. Then the exhibitions followed one another; I remember a few: at the Negova Castle, at the AQ Gallery, at the Niko Ignjatič Gallery and AXX in Celje, at the Städtische Galerie im Theater, Ingolstadt, Germany. This year I had a solo show at the TIR MOSTOVNA Gallery in Nova Gorica.

What about your living in Murska Sobota?
In fact, I am “immigrant” to Murska Sobota because I come from a small village called Krog. The Circle and Murska Sobota are located in Prekmurje, which is the eastern most “province” of Slovenia, where the plain expands, but small hills can be seen at the end of the horizon… I could talk about Prekmurje for hours. Here are the friendliest people, the best people, here they “breathe” the old way, but with a new, modern touch… So, yes… Prekmurje is my nostalgia and my inspiration. Perhaps all this nostalgia is reflected in some of my photos, especially those in black and white. If you ask me about artistic life in Murska Sobota and in Slovenia it must be said that Slovenia has a wonderful artistic history and boasts world-famous artists. However, sometimes I have the feeling that Slovenia is a bit of a stepmother, but these are political disquisitions. Prekmurje has “sent” many beautiful names to the world: Štefan Kološa, an excellent virtuoso of black and white photography, and painters such as Ludvik Vrečič, Ladislav Danč, Franc Mesarič, Sandi Červek, up to the younger ones like Matjaž Geder and Gregor Purgaj. And I must admit that we all speak the artistic language of the lonely and melancholy soul of Prekmurje.

Do you think you have enough supporters for your work?
By nature I am a humble soul and it took me some time to get used to all this attention towards my work. Furthermore, the work done by the staff of the Galerija Murska Sobota is really commendable and very appreciable. Of course, at the beginning it takes a lot of courage and I have the feeling that generally galleries and artistic spaces do not have a special ear for young artists, so there is not much to hope for a real economic support.

Can you give us reference points of your photographic world?
My photographs are ultimately self-portraits and speak of my life as an artistic expression, as a dialogue with the inner self, exploring intimate feelings and impulses. Particularly personal is the series “Which is your girlfriend?” With the series “Melancholy in red” I then wanted to show a state of melancholy, depression, even numbness. This series is something special, also because of the beds that resemble a former hospital or even a twitter. It is important for me to tell the story through the photo shoots, allowing the viewer to understand and hear the story. Instead my black and white landscapes are more subdued, aesthetic and minimalist, leaning on themselves, eyes, thoughts and soul. I then used the blur technique and the subject of this series is the television screen, intended as a window of the world on one’s own apartment, then a window to the reverse. Through this window different places and different disturbing shadows enter. These are not true images, but rather the dematerialized reflections of imaginary and universal nightmares. All these images are blurred as if they were seen through thick glass. In this series, the “monsters” are shapeless and speak of the uselessness of authentic human relationships and communications, and are replaced by the dependence and dependence of a person who gets bored and dies on the sofa, trapped in the tragic frame of the house and time free. The claustrophobic world, through which the misty outlines wander, creates its own images, in which it also attracts the viewer and is reflected as human fear.

Are there any authors with whom you feel affinities?
Of course, there are many authors I can identify with. For example, I like to remember the American photographer Roger Ballen. Studying his photographs, I discovered that the two of us, without knowing each other, were exploring the “dark side” of humanity.

What are you preparing for the exhibition at the Museo Carà in Muggia?
I will prepare a summary of my latest photographic series and present them in a non-regular sequence. The red thread will be melancholy and darkness. 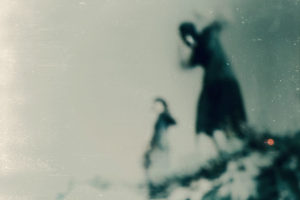 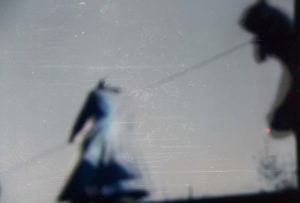