Nataša Kos. The soft and the i..

Giulio Di Sturco (1979, Roccasecca – FR) is a traveler photographer, whose research focuses on the society of the future, in the light of the current environmental changes and technological evolution. His latest project Ganga Ma (Mother Gange, the name with which the Hindus call the river), the result of over a decade of work, will be presented in autumn at the Les Photaumnales festival, an international photography exhibition in France, and from September 25th to 15 November 2019 in the spaces of the Podbielski Contemporary gallery. Since 2007 the photographer has explored the 2500 kilometers that separate the Ganges from the source in the Himalayas in India to the delta in the Bay of Bengal in Bangladesh.

The main subject of this research is an inanimate entity: the river, which Di Sturco has decided to observe as if it were a living organism photographing it with a biographical approach. His approach has been confirmed by the fact that in 2017 the High Court of the Indian state of Uttarakhand recognized the status of human entities to the Ganges and its main tributary, the Yamuna. The law was rejected by the Supreme Court because it was declared unacceptable from a legal point of view, but it nevertheless constitutes a milestone in the redefinition of the relationship between human and non-human entities.

The Ganges is an emblematic example of the unresolved contradiction between man and environment, since it is a river intimately connected with every aspect – physical and spiritual – of Indian life and still today constitutes the main source of subsistence for the approximately 400 million people who live along its banks. Its ecosystem includes a vast heterogeneity of animal and plant species, which are rapidly disappearing due to the toxic waste disposed of every day in its waters. A great victim of the effects of global warming, deregulated industrialization and unbridled urbanization, the Ganges is today one of the most polluted rivers in the world and it is clear that it is on the verge of a humanitarian crisis and an ecological disaster that will endanger beyond a third of the Indian population.

Giulio di Sturco’s images, impeccable, silent and mysterious, obtained by waiting for the best light to create an atmosphere suspended in time that highlights stasis and the absence of life, recreate a sort of “aesthetic of pollution” that goes beyond the border of photojournalistic documentation to approach the public and induce to reflect on the globalized ecological crisis. The luminous intensity of the dawn softens shades and shapes, emphasizing the desolation of those places that once were pleasant and contradicting the stereotypical iconography of India that sees it saturated with colors and life.

Ganga Ma photographs are apparitions that reveal the almost surreal condition of this sick ecosystem and the impotence of the human beings who are part of it. Exemplary in this sense is, for example, the image of a worker who tries to disperse a mountain of chemical foam with a weak jet of water, a Sisyphus effort that appears immediately destined to failure, or the disconsolate crossing of two fishermen in a boat, who presumably will return to their homes with a poisoned booty. Due to the rising sea and salinization, the delta, already depleted in dry periods when construction companies take sand to use as construction material, is turning into a desert, where an ethereal white horse seems to refuse to go. 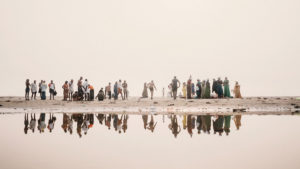 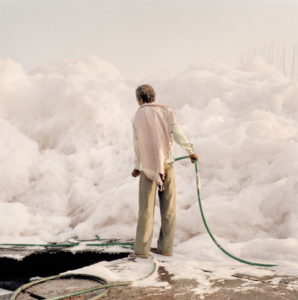 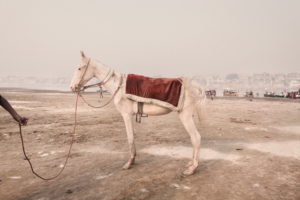