Timeless Mucha – Mucha to Manga: the Magic of Line is the evocative title of this traveling exhibition which, from 13 July 2019 to 29 November 2020, can be visited in some of the biggest cities of Japan: Tokyo (Bunkamura Museum of Art), Kyoto (Museum of Kyoto), Sapporo (Sapporo Art Museum), Nagoya (Nagoya City Art Museum), Shizuoka (Shizuoka Prefectural Museum of Art), Nagano (Matsumoto City Museum of Art).

Organized by Mucha Foundation, in collaboration with Nippon Television, it presents around 250 works including posters, drawings, sketches and illustrations by the great Czech artist (although many believe him French, Alfons Mucha was born in Moravia, in Ivančice, in 1860), some works of art belonging to his private collection, including Japanese prints, of which he was a keen admirer. Finally a whole series of works that, starting in the Fifties, were made by Japanese artists following, in a slavish way, his stylistic movement, so that, to an untrained eye, it is difficult, if not impossible, to catch the differences.

And the Manga? They are also very often inspired by Mucha and the Art Noveau (as were some illustrations of Marvel comics, from Daredevil to Captain America).

The exhibition path shows how his legacy influenced the psychedelic rock culture of the Sixties in the United States and in the United Kingdom (record covers and posters, from the Rolling Stones in concert for the 1969 Tour to those, for the Grateful Dead, of the legendary Avalon Ballroom music venue in San Francisco, between 1966 and 1969) and then also, in the 1970s and still today, eighty years after his death, the Manga and Japanese Anime.

In fact, in the Paris of the late nineteenth century, Mucha discovered Japanese art and studied its rules. He fell in love with plant motifs, lacquers, ukiyo-e prints by Hokusai and Hiroshige (with their images of the floating world) and succeeded then, in a surprising way, to rework everything creating a “western” style, original and innovative. The Mucha style, precisely: whose genesis starts from the soft wave patterns of the Rinpa School (XVII century), from the Iris and maple leaves, from the Yukata drapery, from the voluptuous sensuality of the courtesans of Yoshiwara and others pleasure districts.

A great love, totally returned by the Japanese.

Not surprisingly, the second largest collection of works by Mucha (with only the two originals in the world) – posters, oil paintings, sketches and jewels (including the well-known “Snake Bracelet and Ring” 1899, in gold, opal, diamond) – has been collected, with painstaking patience and decades of research and commitment, by the industrialist Kimio Doi and then donated to the city of Sakai (in Osaka Prefecture).

Many contemporary great painters, like Takeji Fujishima and Hiromitsu Nakazawa, have been fascinated by it. After the war it was born, with excellent results, even a “Mucha style” school, capable of producing works almost indistinguishable from those of the Master.

The influence of the Czech artist in the production of Manga is overpowering (after all also the immense Katsushika Hokusai is, unanimously, considered the first “cartoonist” in history), especially in the genre Shōjo, that, so to speak, which focuses on emotions and romantic relationships and dedicated, specifically, to a young female audience (for example, Candy Candy, Mars or Lady Oscar). In short, art forever, which, like the Arabian Phoenix, regenerates and, like Proteus, changes shape. Timeless, because at the time it adapts, always remaining fresh and current.

If for the God Anubis (The infernal machine, Jean Cocteau) “the time of men is Folded Eternity” for Alfons Mucha, then, “time is a Perennial Eternity”. Time never pass: there is no yesterday, there is no tomorrow… only an appreciable profit today. 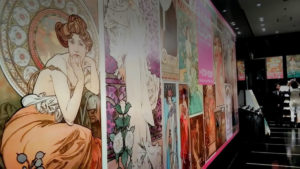 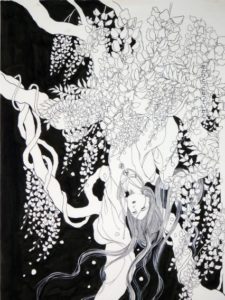 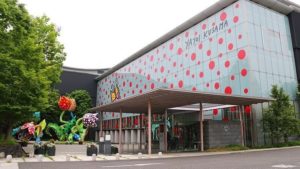