All the life we ​​need to live, everything we eat, is exiled elsewhere. And all life that is not part of our needs is kept even further away, in spaces called forests, literally the extreme outside – a sort of lifelong refugee camp that does not concern us.
Emanuele Coccia, Astrologia del Futuro, 2020

Since ancient times, nature has shown its most mysterious and ferocious side, offering refuge and protection to humans. Source of vital energy, it has nourished, raised and cradled them among the clearings of its ancient woods, inspiring arcane prophecies and rural rituals. Yet, suddenly Mother Nature, always feared and admired, raised a silent cry of pain. In the era of the Anthropocene and consumerism, the link between the human being and the natural element has gradually worn away in favor of a frenetic and only apparently more satisfying lifestyle. A physical detachment, clearly visible in our housing units and cities[1], but above all spiritual.

Natural Ellipsis, Anima Mundi and ecological conversion, the solo show by Pietro Lo Casto (Bologna, 1986) curated by Rita Meschiari in the spaces of Gate 26a and Studio Tape in Modena, has its roots in the artist’s personal need to implement an inner revolution in order to reach the connection with the macrocosm of nature. This need has slowly made its way into him, when for the first time he realizes that he can no longer tolerate the lifestyle he was leading in London. Thus began his journey, first in South America, then in Australia and Asia, up to Bangkok, where he currently lives. It is at that moment that photography becomes an indispensable companion and constant research tool. However, his personal and artistic conversion would not have been possible without some fundamental episodes; first of all, his acquaintance with Geir Leklem Ertzgaard, a Norwegian-born photography teacher, who teaches him to immortalize the natural element in its magnificence and strength. Later, during the days spent together with the community of Santa Elena, near Medellin, he takes part in a ritual where he takes on Ayahuasca, a root with psychotropic properties. “That third and last night outside the maloka a storm was raging”, says the artist, “I saw the veins of the earth and the green blood of the trees. I felt that connection, there was something incredibly satisfying about realizing that we are deeply connected with each other and with nature, that happiness doesn’t come from making tons of money and buying things, but simply from supporting one another, from loving each other and loving this world. It seemed to me that I already knew all these things, but that I had repressed them over time. Life had taken me away from this. The photograph has arrived, to take me back. […] After that weekend I started a new path and very quickly photography became the tool to continue exploring that place within me”.

The work To Search the Secret of the Forest, comprising a video and a series of thirty-five photographs, was born from a further awareness. After enrolling at the Pathshala Institute in Nepal to study photography, Lo Casto approaches the community of a village called Tangia Basti, making it the protagonist of his most recent research. Movie, visible at Gate 26a in via Carteria 26a, is a fixed shot of the nature that surrounds that place. Time seems to have stopped as buffaloes slowly approach the room. The steam of the river makes the images muffled and dreamlike and it is the first moment in which the perception that one has of the vision is almost spiritual. The only protagonists here are the animals and the forest that welcomes them, the distant and near sounds, the sense of intimacy of the story. Yet, it is not just about pure contemplation, nature reveals itself in all its intensity. Around the central video, four televisions instead show some villagers intent on daily or religious actions, such as dances and shamanic rites.

Those same figures become central in the photographic series exhibited within the second exhibition space, Studio Tape. In these shots the mystical relationship between man and nature becomes even more central. On the other hand, Tangia Basti is not a settlement like the others. It originated almost forty years ago, when the Nepalese government decided to send a group of farmers who came from the Himalayas, inside the Tarai, an extensive flat area of ​​Nepal, for reforestation work. Following a change of government, these people were forgotten and, finding themselves in this flat and fertile area, they decided to stay to create a residential nucleus. Today, the prospect of construction of the Nijgadh airport looms over the area and, if the probject was accepted, it would be the largest airport in Southeast Asia, resulting in the consequent deforestation of the area and the relocation of the entire community of Tangia Basti, whose inhabitants, given the origin of the formation of the village, do not enjoy any rights owned on the lands. However, Lo Casto’s work does not want to have a merely documentary or denunciation function. Despite the strong social themes that the entire series is imbued with, his photographs with their cold colors and neutral tones want to tell how the life of those who live that territory is intertwined in a visceral way with the neighboring environment and how it is possible to return to a primordial state, in which human being and Mother Nature live in symbiosis.

If on the one hand “in these images”, explains the curator Rita Meschiari, “it is possible to find that sense of abandonment and suspension, of a destiny that is probably inauspicious but still to be defined and of a past and a present lived as guests in their own land”, on the other hand, “the community has found in nature the perfect ally to fulfill its needs. The water of the river is warm only in the early morning hours and only in winter and is the perfect example of how man and nature work together in Tangia Basti in an almost surreal balance”.

The final project is complex and fascinating, the fulfillment of a need that turns from individual to collective. In fact, in the last period, Pietro Lo Casto has also approached the Post-Human current, investigating a type of consciousness that can lead to a community and distributed subjectivity, supported by the shared desire to reach an adequate understanding of the conditions that limit our freedom[2]. The community of Tangia Basti then becomes a metaphor of a need for a change of perception and a common ecological conversion. “The forest immortalized by the artist”, concludes the curator, “is no longer that extreme outside of which Coccia speaks, that refugee camp for life that does not concern us, but is an example of pulsating life and bell from the alarm at the same time”. 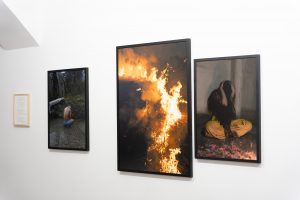 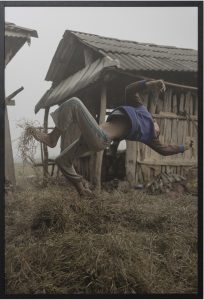 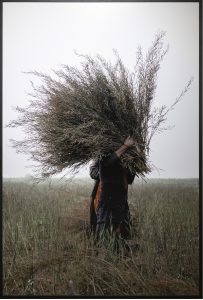 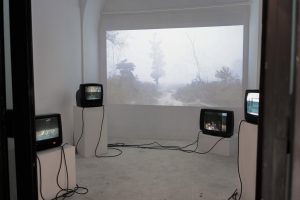