Carlos Casas, protagonist of I..

New connections and forces between architecture an...

The permanent exhibition POINT OF EQUILIBRIUM. Thought Space Light from Toyo Ito to Ettore Spalletti has finally opened in MAXXI L’Aquila Museum, inside Palazzo Ardinghelli. After the damage suffered following the dramatic earthquake in 2009, the eighteenth-century building was subjected to consolidation and conservation restoration, thanks to the support of MiBACT and the Russian government. On 30th May 2021, the new centre of the museum opened to the public, with a group show dedicated to Ettore Spalletti, curated by Bartolomeo Pietromarchi and Margherita Guccione. The set up moves around the synthesis that the artist created in the chapel on the first floor, the installation Colonna nel vuoto, L’Aquila (2019). The cylinder is bright and clear, in a perfect harmony with the small environment, like an extension of the gaze towards the lantern, made of pure light.

Starting from his reflection on balance, through the encounter between the nine site-specific productions and the MAXXI collection, the exhibition is looking for an answer of stability, that in this period became a real urgency. The suspended atmosphere of ideal tension designed by Spalletti is at the basis of the entire itinerary, that begins on the ground floor, where the work of Nunzio (Sospeso, 2019-2020) guides the visitor to scroll inside the rooms.

La città sale by Elisabetta Benassi (2020) wants to raise up again a city, which is like the individuals, who must always deal with instability, but it can move up, starting from the firmness of its own memory. It is a shared action of power and resistance, which dialogues with Mother by Maurizio Cattelan (1999-2000), and anticipates the concept of relationship explained in Senza titolo by Maria Lai (1989), who tells the importance of her own traditions, using the combination of language and weaving technique.

Giovanni Chiaramonte (Senza titolo, 2002) and Gabriele Basilico (Calabria; Stretto di Messina, 2002) look at the coast area close to the Strait of Messina, studying the environment and its transformations. The landscape as an autonomous and complex entity is relevant in their photographic research. In fact, some narrow views explore the relationship between natural and artificial, in order to highlight a contrast between aggressive buildings and the beauty of the portrayed places.

The aesthetics of detail is also in the images of Paolo Pellegrin, who in L’Aquila (2018) puts in 140 shots his documentary attention, discovering an alternation between light and shadow, through which he managed to capture that conflict between black and white that never explodes. In a metaphorical perspective, in which this chromatic break up alludes to universal feelings, the two nocturnal shots instead, make Rocca Calascio Castle a mysterious and emphatic place, that comes out from the rest of the setting.

The focus on architecture continues in the playful ambiguity of the project Aquila by Stefano Cerio (2019), in which the artist presents the absence and, with the appearance of inflatable buildings on an Apennine background, he submits us a disturbing, suspended and precarious playground. Immateriality and lightness are typical of the experiments that Toyo Ito conceived in 2005, with the Relaxation Park in Alicante and the Grin Grin Park in Island City in Japan, two symbols of integration and harmony with nature, designed in empathy with the landscape.

Otherwise, Salvatore Arancio in The Circular Crest Of A Submerged Crater (2006) starts from existing contexts and takes extracts from different sources, to arrive at the impossible scenario of a dramatic Etna. The development of multiple references, that combines reality and fiction, stimulates a magnetic aura, as the evolving forms produced by Daniela De Lorenzo in the sculpture Come se (2019), in which the stratification of the paper corresponds with the movement of her body in space. Each point of view gives us a shape with different boundaries, that each time recalculates the relationship between the individual and the surrounding space. A split that in Studio for “Eco nel vuoto” by Giulio Paolini (2017), involves the analysis of some founding elements of the artistic language, in this case the duplication between author and spectator.

The point of balance between these and the other works on show is the possibility of an osmosis between abstraction and concreteness, in a silent connection between virtual and real. Time has an intangible nature that become present, within the dialogue established with architecture and its internal and external forces, maintaining a luminous tension, at the basis of every new beginning that looks to the future. 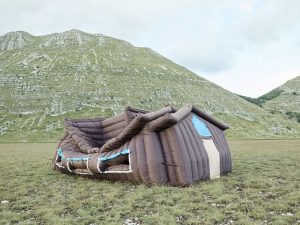 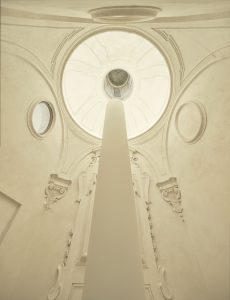