About photography: in conversa..

In the introduction of A thousand plateaus (1980) Gilles Deleuze theorizes a model of society in which every hierarchy, every structure – as the primary source in the creation of power and inequality – is about to fall. The rhizome – a root system of some plants whose horizontal development is open to express such a model – responds to the principles of connection and heterogeneity which states that “any point of a rhizome can be connected to any other”. If one applies such principles to the present regime of the hypervisible, a term whose rhetorical force does not affect its efficiency, the principles of connection and heterogeneity allow that constant mixing of an unlimited visual archive that can potentially give birth to an endless offspring.

The wish to submit such a globalized, endless visual heritage to a sort of stress test through the postmodern strategy of the quote is at the base of the investigation of the spanish street artist Okuda San Miguel, whose work is exposed in Bologna in The Renaissance metaverse, an exhibition which simultaneosly takes place at two locations (the church of San Mattia, Via Santo Stefano and the spaces of MAGMA Gallery, Via Santo Stefano) 4 December.

By choosing a title, Renaissance Metaverse, that joins – or at least tries to – past and present. Okuda formalizes his own image of a transitional age and, without taking a stand, restricts himself to fill up the set of samples of that “de-dramatized simulations” described by Jean Baudrillard (The Conspiracy of Art, 1997) showing his lack of courage. As the italian journalist Christian Nirvana Damato pointed out in a recent article for “Artribune” (Immaterial goods and digital kitties. Crypto-art between innovation and dangers), “the world is saturated with representations”.

The artist, fully inserting himself within that current that reshapes the inevitable samples of the “classic” (Milo’s Venus, Michelangelo’s David) and places them in a hyper-saturated space, places himself in the wake of artists (to name a few) like David Lachapelle or the Russian collective AES + F, on whose compositional suggestions (the choice of the tondo is a recurring feature in the works of AES + F) goes to graft multiple ideas, derived above all from the most recent popular images: Mickey Mouse, the “contemporary Messiah”, is taken down from the cross (The Last Descent) to reappear as Judge (Todes somos Ella); alongside the two versions of New Mona Lisa the albums of Wu-Tang Clan and Public Enemy appear; also the pokèmon Pikachu, in addition to lending the iconic ears to the Venus of Milo, is revealed twice, both in the original version and in the forms of its meme adaptation.

The ingredients that complete Okuda’s vision, and which define it in its superficiality, are the multiform decorative patterns that make up the epidermal layer of the fauna that populates the various scenes, made up of animal, hybridized or more distinctly humanoid creatures. Okuda’s stylistic feature – a warp of colored triangles – is accompanied by the systematic use of the brick pattern and by the insertion of logos of well-known fashion brands – Gucci, Louis Vuitton – whose consistency is that of wallpaper. What scenarios will be opened by the advent of cryptocurrencies? What future for the queer community? Even these questions, central to today’s cultural debate but with an uncertain outcome, do not escape Okuda’s leveling action, being reduced to a mere ornamental plot (the bitcoin and queer versions of Jesus and the Virgin). Moreover, even when he advocates the utopia of the liquefaction of national states (Flags of love), winking, even if from a distance, at the operation of Margherita Moscardini at Palazzo Strozzi (The decline of the nation state and the end of the rights of man), the Spanish artist does not seem to want to take himself seriously, being the last and unconscious heir of the apologists of irony “at all costs”. However, in a world that has abused this device, totally defusing its power and ability to affect reality, and which seems to want to die for excess of irony, Okuda’s work inevitably comes to deprive itself of charge, of polemical verve. On the contrary, resolving itself into a stalemate, Okuda’s set of operations is configured rather as another demonstration of the (in)effectiveness of the bachelor machine of sensationalist mannerism. 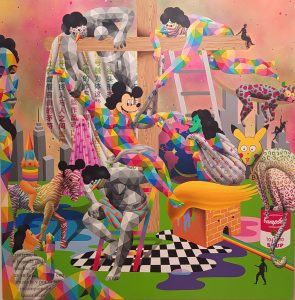 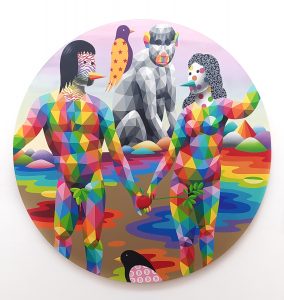 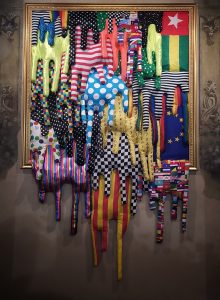 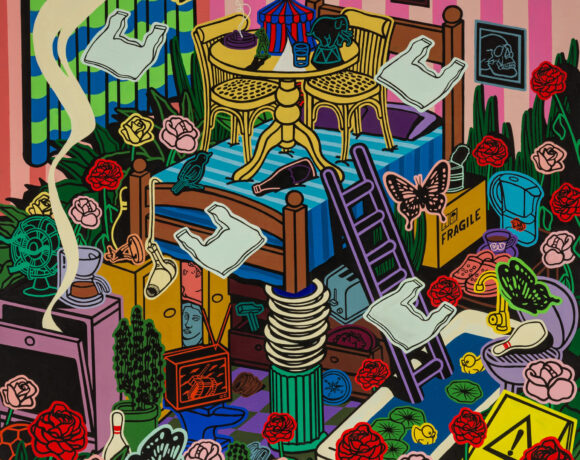 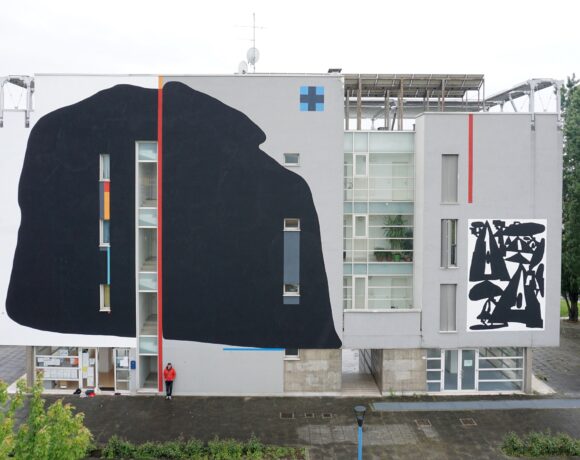