We are in Vienna, in the Freihausviertel, one of the most interesting districts of the Austrian capital, less than 800 meters from St. Stephen’s and near the famous Naschmarkt market in Vienna, which starts from the Viennese Secession building. In this area, in the eighteenth century, stood the theater that hosted the premiere of Mozart’s “Magic Flute”. Today it is one of the most lively and interesting meeting places in the capital, with Vienna’s oldest cinema, numerous galleries, bookstores, trendy shops and restaurants for every taste.

Among the numerous galleries and places of art we also find the Charim Gallery, which boasts an interesting collection of Viennese shareholder works and therefore works by artists such as Otto Muehl, Günter Brus and Hermann Nitsch. Charim was also the first gallery to exhibit the works of one of the most interesting artists of the Austrian post-war avant-garde, Valie Export.

In a very generous space of 300 square meters, collective and personal exhibitions alternate, proposing questions on the role of art and on different political and cultural themes.

This time in the gallery in Schleifmühlgasse the Slovak-born artist Katarina Spielmann, who lives and works in Vienna, a pupil of Daniel Richter at the Academy of Fine Arts in Vienna, takes the stage. Here she presents her first solo show after several group exhibitions including:

Katharina, can you tell us how you discovered the passion for painting?
Yes, of course, and it is also a rather curious fact and dates back to my childhood. In my town there was the opportunity to play table tennis and my parents absolutely wanted me to practice that sport, which I hated with my whole being. The only thing that fascinated me was the Chinese ideograms printed on the ping-pong boxes and so I spent hours recopying them. Since then I have never lost the passion for graphic design, for drawing and I never missed an opportunity to refine my technique. I have always painted in my life. However, the awareness of making it my job matured only later, due to a very strong need, and that’s why I decided to enroll in the academy, where I am a pupil of Daniel Richter.

Which artist inspire you?
I can’t say that I have very precise references, but I certainly did a lot of confrontation with American expressionism, with painters such as Ellsworth Kelly or Baziotes.

Here in the Charim Gallery you present your first solo exhibition, after several group exhibitions in Austria and Germany. What were your feelings?
It was a demanding job, especially for the type of space I had available. It was a fairly narrow and long space, where it was difficult to arrange the works. I saw the arrangement of the works as a challenge. I started to take over the space and decide how to involve the public, how to order the sequences of works in this space with a certain rigor, creating a path of experiences and a rhythm entrusted to the works. The way of arranging the works is an integral part of the exhibition intends to offer the visitor an additional reading key.
I painted many of these works in the countryside and I feel the atmosphere, even if they derive from the urban dimension. I wondered how I could reduce nature into forms, extracting from nature forms that appear as symbols. And so I worked in shape reduction. What I see is really a flower, is it a seed or something else? The colors I use are very unnatural, I am interested in materiality and so my works give the effect of being fabrics that have been colored, almost wallpapers.

What technique do you use?
I never gladly talk about technique. The technique, for me, is basically just a tool to reach expression and can be different and change over time. What I can say is that I use materials that come from the industry. I break away from the classic oil painting on canvas to break it with elements that are not meant for use in painting. Building materials, chemical solvents that attack the canvas. Some smaller works are treated with stuccoes for building and then the color is given to oil. I am interested in creating this break and experimenting with these unconventional materials.

What else would you like to add to define your way of working and being an artist?
I entrust to you what Max Henry wrote, an art critic who visited the exhibition and who wrote things in which I recognize myself very much:
“Ver Sacrum. Its strikes you, these pictures seem to have their own morphing into the tranquility of space-time vacuum where landscape, vegetation, and Homo sapiens converges. Dormant things awaken; motion is detected in the geological structures accrued in small relief works. Such autonomous studies are made of troweled plaster and thin washes of color accrued into sedimentations of a subdued palette. Expanded upon a numerous canvases with fine honed color, bundles and chords of bulbous shapes often suggest human torsos and bodily limbs. Lush solid plums, teal, and dark earthy counter the visible ground of fleshy Braque pinks. Stalks climb upwards in space like mushrooms, poke through or beneath the overlapping imagery. Ellsworth Kelly, who unexpectedly informs her “strange geometry …” 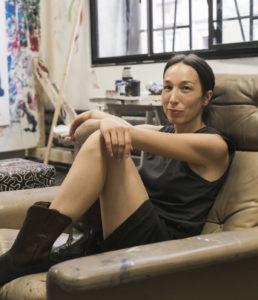 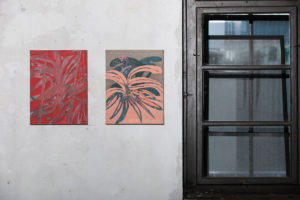 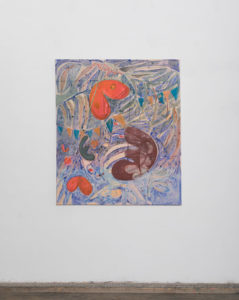 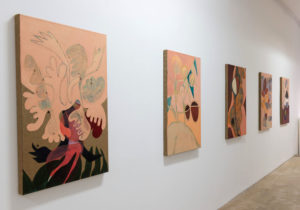 Graduated in German Literature, cultural operator between Rome and Vienna and co-founder of the Raabe association in Rome, public official, passionate about art, photography, theater and literature, translator. In Vienna he collaborates in the management of the cultural space ALBERI Kulturbau which hosts, among other things, performances and art exhibitions.