Poetic and ethical, in the art of Marco Nones, move forward together. It is not unusual when the relationship between Human and Nature is the center of attention. When we look at contemporary art instead, they seem to recall traditional art forms.  Current ecological issues lead the artist to reconsider the concept of beauty according to an ethical perspective when it raises questions about the future of new generations. The last performance of the italian artist Marco Nones from Trentino, founder of RespirArt, the highest art park in the world, took place in the urban context of Piazza Duomo in Trento.

A hundred ice brains, created using a 3D model made by Muse (the Trento Sciences Museum), melted in the sun, letting the word Indifference shine on wooden tablets.  Indifference is also the title of this new work aimed to encourage an awakening conscience about climate change,  melting of glaciers and destruction of forests.

Indifference, the artist explains, is that which turns the interior landscape of each man into a desert and consequently the exterior one.  It is no longer possible to admit a dualistic conception of the relationship between human and nature, nature is also part of human being, becoming part of him through breath, nourishment, sensations and perceptions, in order to promote his organic and spiritual development.

A life without thinking about environmental protection and future generations means to forget the idea of ​​creation and life, using only our brain to get profit.  The diametrically opposed image to this scenario is the Creation of Adam of Michelangelo in the Sistine Chapel ceiling where the creation of the Man is connected to the shape of the brain from which the creative gesture of God comes out.

The brain represented by Nones, goes towards another direction instead, in order to be an expression of a form of denunciation and protest. It goes towards the disappearance of intelligence, moving away from an empathic relationship with nature and dissolving into nothingness.

The wooden tablets were made by reusing the wood of the fallen forests in the valleys affected by the Vaia storm in October (2018). The importance of materials is a component of Nones’ artistic work. Natural materials such as wood, roots, ice, often colored with natural pigments, are usually left to nature itself which completes the work of transformation of the material started by the artist.

Sometimes the works disappear, they dissolve coming back to nature. This is the case of ice sculptures inspired by the poems of Alda Merini for the high-altitude exhibition Nel cerchio di un pensiero or of the work Uova d’acqua which melted at sunset on the Calabrian coast.  In this performance the context is  absolutely urban instead,  perhaps because it doesn’t want to arouse a sense of wonder among amazing natural settings, but it wants to promote a strong sense of social responsibility.

There is one more step in this performance by Nones, beyond the limits of Land art, towards Public Art that  is exhibited in public spaces such as squares. The square is the place where the Environmental protests take place, as the case of Greta Thunberg shows.

The image of a dissolution can be more  incisive than a cry of protest. The poetic and spiritual art of Nones brings attention to power of the image in order to promote a transformation in the way of human thinking and acting. 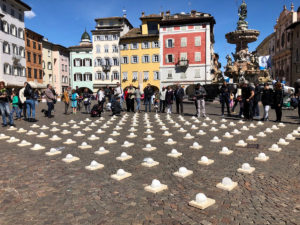 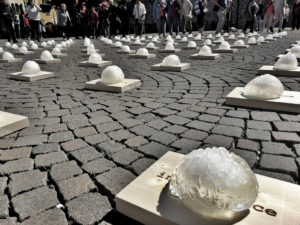 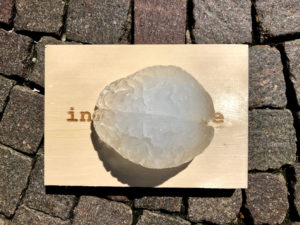