Omar Galliani: more and more towards the East

The educational methods of Ade..

Omar Galliani: more and more towards the East

For the acquisition by the National Museum of Art of China (NAMOC) based in Beijing of the painting “Lontano da Xian” by M°Omar Galliani, who becomes part of those, together with “giants” like Picasso and Dalì, very few Western authors present in the collection of the museum, now we can understand thanks to his words, the importance of this event and how it constitutes the culmination of a lasting and deep bond.

When and how did the exhibition relationship with China start?
My dialogue with China starts at the end of the 1990s, when during Artefiera in Bologna, I met Monica Demattè, an Italian academic who at the time was already working in Shanghai in a museum institution. They were still the years before the commercial boom that would then explode across China in every activity including that of art. I presented in those years in Bologna, a series of large “mantra” made with pencil and gold on wood. Monica talked to me about the opportunity to exhibit this cycle of artworks in China at the museum of the Beijing National Art Academy. So we brought in China the installation “Mantra” (composed of 20 great artworks) to which I added other site-specific artworks. There were a lot of bureaucratic and customs difficulties, including the censure of a painting that I had to change between those chosen for being exhibited. In those years in China, it seems ancient to talk about this nowadays, rarely it was seen to expose a Western artist in Beijing or in Shanghai, and more rarely an Italian artist. So we can also imagine how rare it was to have these ten-million-people cities that I touched during the years 2006/2007.

What kind of artistic and academic ambience – you also held a painting course at the Wuhan Academy of Art – have you found in this context?
In the years after my Chinese debut, things changed quickly thinking back at the first biennale in 2003 where I was invited and won ex aequo with Georg Baselitz and a Chinese artist. In that biennale, I remember Chinese artists that in a few years had already seen the “catalog” of the contemporary western art appropriating and repeating, contaminated with local elements, the linguistic and technical codes of the Western avant-garde. When the Art Academy of Jinan gave me the ad honorem degree in painting with which i could take a course to the Art Academy of Wuhan, I remember entering the office of the secretary, being surprised by the great quantity of small paintings hanging on the walls, whose subjects still life and landscapes reminding me inequivocably of Giorgio Morandi. I asked for information and I learned that in the 1960s, an Italian artist who studied at the Bologna Art Academy with Giorgio Morandi, took some painting lessons and that his students were so influenced by him that they all paint to the manner of “Giorgio”.

In addition to the pleasure of this acknowledgment, how much openness have you found towards the extra-oriental artistic production?
I do not know how a Chinese adventure like mine can exit or enter into the related cultural and aesthetic codes. I believe that for the Chinese it is fundamental to know, assimilate, reproduce, buy, and sell with all the benefits arising from a natural preparation to the negotiation. The experience teaches me that their diplomacy and waiting for the acquisition of something new, are part of a millenial tradition of which we don’t know a lot  and in the meantime has been transformed and updated. I do not know many Western artists who made it to the Chinese art collections. Behind every negotiation I believe there is always a particular attention that is not always necessarily linked to the artwork or to the artist, but to the cultural and historical context from which the author comes from.

Would you like to describe and explain to us the symbolism and meanings of the acquired artwork “Lontano da Xian”?
“Lontano da Xian” is a painting linked to a theme that was proposed at the last Beijing Biennale “The Silk Way”. It is a panel of large dimensions produced in pencil where an androgynous figure is mirroring himself showing on his neck a tattoo of a pomegranate. The pomegranate, is a fruit of the East arrived in the Western territories through the Mediterranean Sea on the convoys of the silktraders thousands of years ago. The two mirroring backs of the head form the shape of a vase that contains a constellation.

Do you feel that your experiences from China over the past eighteen years have influenced the evolution of your style?
The works and the journeys that have marked for so many years that stretch of sea or sky that still binds me to and takes me away from China over time, have left traces and signs in my work even without the immediate realization. It was a homeopathic, slow and constant contamination.

Can we say that already with the 2015 exhibition Omar Galliani…a Oriente, that you tried to take stock of this artistic relationship with that world and its cultural dimension?
Certainly, but before the 2015 exhibition, I had already exposed in 2007 a family of artworks linked to my travel and experiences in China at the Foundation of Querini Stampalia of Venice, during the Biennale. The preparation was curated by Mario Botta, he also is a great creative and traveler in the East. The chosen title was “Omar Galliani between the East and the West”. A selection of forty artworks from between 2006 and 2007 that I had showed in China in twelve academy museums of twelve big cities. Already then I noted the influences received by the lights and the shadows of the many signs collected. The colors red, gold and black already had a central part in my work, recovered on canvas or on panel a new and regenerated geography. 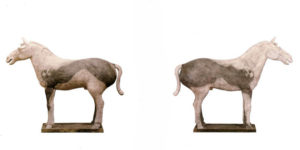 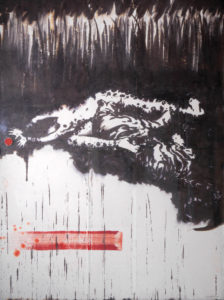 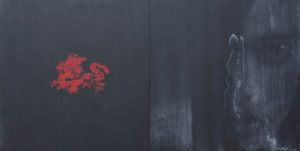 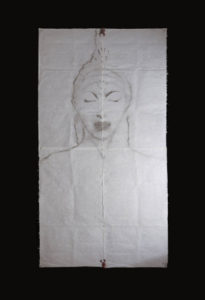