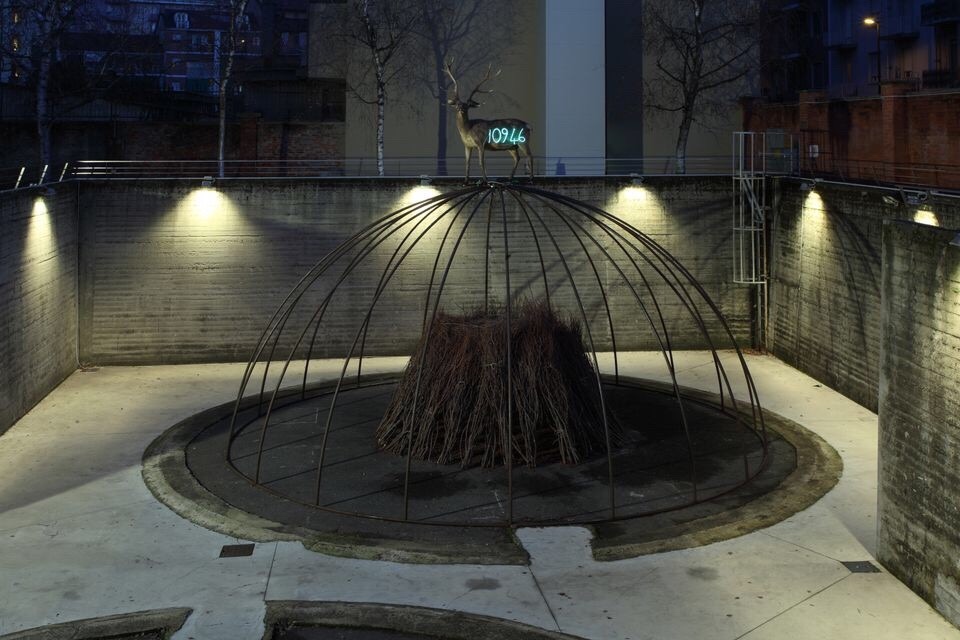 The nomadic condition of modern man resembles that of the primitive fruit collector, Marshall McLhuan wrote in 1962.  And there was a moment in the history of art, in which, together with being of a real anthropological mutation, the short circuit between the will to look at the future and the recovery of archetypal materials was given.

So it was for the dean of Arte Povera, Mario Merz (1925 – 2003), mystic and alchemist, philosopher and mathematician, who told the cosmic world. The year is the crucial 1968: avant-garde research requires an enlarged aesthetic, a relationship with the work of art that is no longer merely contemplative, but which solicits body and mind.

For Merz it is the year of the first igloos, metal structures covered by materials of common use and highlighted by the lifeblood of the neon; primitive house, paradigmatic form, energetic figure, between nature and culture: «the igloo is a house, a temporary house. Since I consider that deep down today we live in a very temporary era, the sense of the provisional for me has coincided with this name: igloo ».

Independent space, absolute space: thirty-one «Igloos» (from ’69 to 2003) of the Italian master are the protagonists of the 5,500 square meters of the Hangarbicocca Nave; yet an organic and organicistic environmental proposal, after the success of Lucio Fontana’s Environments. The exhibition project, which brings together some iconic works from the most important museum institutions in the world, is curated by Vicente Todolí in collaboration with the Fondazione Merz, and takes up the speech already set by Harald Szeemann in 1985 at the Kunsthaus in Zurich. The Swiss curator, who not by chance called himself “space poet”, had wanted to dedicate a personal exhibition to the Italian artist “in order to form a village, a country, an unreal city”.

In this case the path opens and ends with two works exhibited individually for their specific characteristics: La goccia d’acqua (1987), the largest igloo ever made by Merz for the CAPC musée d’art contemporain of Bordeaux, ex-warehouse of the colonial era, and Senza titolo (doppio igloo di Porto) (1998), created for the park of the Fundação de Serralves of Porto and characterized by the presence of a deer on the top. Therefore the exhibition is developed by chronological groups , in which the igloos are exposed at a short distance next to each other: we start from a variant created by the artist in 1968, Igloo di Giap, in which the steel structure is covered with parcels of clay and an neon inscription that reads: “If the enemy is concentrated loses ground if dispersed loses Giap strength”, a sentence pronounced by the vietcong general Giáp, symbol in those years of the struggle against Western imperialism.

Just beyond, the first glass igloo, Acqua scivola (1969), originally created for the Roman gallery Attico, a real gym for the artistic experiments of those years (Gino De Dominicis, a provocateur par excellence, will also exhibit).
Then, we tail the evolutions of the following years, from the exemplar created for documenta 5 in Kassel, dedicated to the artist and partner Marisa (Igloo di Marisa, 1972), to spaces that are more and more complicated, living in dichotomies: Chiaro oscuro / oscuro chiaro (1983), Noi giriamo intorno alle case o le case girano intorno a noi? (1985); or they become precious, as in Foglie d’oro (1997) or developing concentric structures: Spostamenti della terra e della luna su un asse (2003), intersecting this research with some key points of his poetics, spirals, neon, Fibonacci series. The viewer is into a parallel world: the exhibition supports a gaze that almost doesn’t have time to enjoy the individual artworks, but is forced, laboriously, to wander in search of an emotional relationship with the surrounding space. Temporary space, perhaps, but open. Space that speaks to the present, nourishing it of past and future. 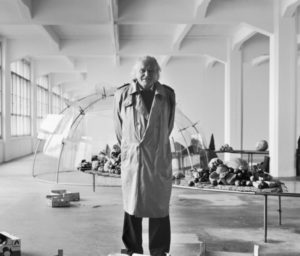 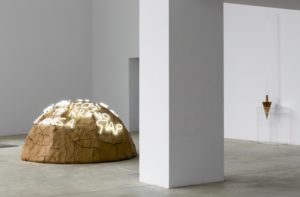 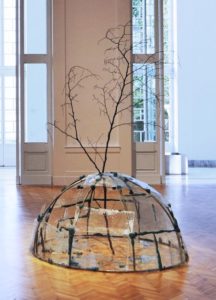