The new MACRO: the Museum for ..

With illustrations, the risk of falling into boredom is truly rare: they animate reading and with their communicative power allow us to free our imagination. They are a very ancient art form, already used by the Egyptians who drew religious images on papyrus, but it was only in the nineteenth century that this artistic expression reached its maximum flowering, when particular Victorian-style images created by independent artists-illustrators who shared an interest in the link between art and literature began to spread in England. The favorite subjects of this current were those typical of Victorian everyday life, such as noble lords, green landscapes, but also the degradation and exploitation of the weaker layers of society.

The illustration embodies the whole sense of what we are looking at and manages to go beyond written words; when it presents itself as narrative (alone or in a succession of drawings) it must tell a story capable of arousing curiosity in the reader-observer. A fundamental element for any type of illustration is the synthesis, the ability to express in a single image (also accompanied by descriptive elements) a story, a text or a message.

I have the immense pleasure of personally knowing a promising illustrator, Rossana Platania, born in 1988; the artist lives in Catania, her hometown in whose Academy of Fine Arts she studied Cultural Heritage and Interior Design.

She has always liked to experiment in order to seek her way and her style by herself. From drawing on paper she moved on to the walls creating works of street art, to then get to the digital media where she creates her illustrations, mostly characterized by soft colors and flowers.

Hers are stories of everyday life and fleeting moments of a girl who lives on emotions and sensations, a girl who looks at the world as a curious spectator and becomes the protagonist in every single subject-object of her illustrated tables, in which thoughts come to life, colorful and never banal, of a mind in step with the times.

Mery Scalisi: How was your passion for illustration born and what was your first illustrated work?
Rossana Platania: My passion for illustrations is the consequence of my interest in drawing and art in general, in all its forms, and it stems from my desire to try to put on paper the thousand ideas that I have in mind. My first illustration, if I’m not mistaken, was a sunflower: I love drawing flowers, it relaxes me a lot and I enjoy combining them with something unthinkable, but flowers make everything more beautiful.

S.: Tell us about your way of illustrating.
P.: Paradoxically, I don’t have a “way” or a technique, I am a self-taught person, so I try, let myself be inspired and gradually I try to improve myself and find an increasingly personal and recognizable “style”.

S.: What tools do you use to bring your illustrations to life?
P.: Actually I have been creating illustrations for a short time, I bought an iPad about 6 months ago, it all started from there.

S.: What role do you think illustrations play in the collective scenario of the visual arts?
P.: Illustration is a very ancient art form. The first forms of communication were not verbal but figurative. They were subsequently used in publishing to accompany a written text. So they have always had the function of making a concept easier to use. As for my illustrations, I hope they can convey something, I believe that the purpose of art in general is to arouse an emotion, to recall a memory or why not, to arouse hope. 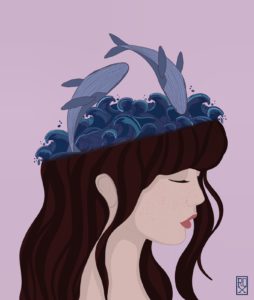 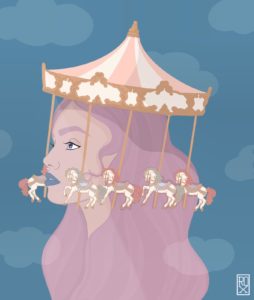