In dialogue with Guido Bisagni..

“The Golden Calf” by Ryan Mendoza is a large site specific exhibition in the grandiose Royal Palace of Palermo. The American artist, who has exhibited worldwide, created a beautiful project together with the Federico II Foundation. A path of contemporary art and “a challenge in a place with almost a thousand years of history” to reveal the paradoxes of our time. Mendoza’s work lasted three years (during the pandemic) and was supported with foresight by Patrizia Monterosso, director of the Federico II Foundation, with the Brodbeck Foundation and the collaboration of the Academy of Fine Arts in Palermo. The artist’s idea is to evoke a meaningful message to reflect on the betrayal of nature and on the betrayal among human beings, an appeal to intercept lost values ​​against false idols. A powerful concept, obtained through painting, ceramics, photography, video, mixed media, envelops the viewer and provokes through ambiguous metaphors, such as the installation of the mountain of stuffed animals in the courtyard and the many bats inside and in the gardens of the Royal Palace, but also scattered in other places, including the MANN in Naples and the Mausoleum of Cecilia Metella in Rome. The exhibition gathers forty-two works including paintings, sculptures and installations, almost all made expressly for the show, occupying the entire building from the external facade to the courtyard on the main floor. We interviewed the famous American artist, who has a past in New York and lives between Berlin and Italy, now in Sicily, after a long stay in Naples.

Manuela Teatini: What effect did working for the Palazzo Reale in Palermo have for the suggestion of the place?
Ryan Mendoza: At first it was like an impossible challenge for me, due to the large spaces and historical references. It was a long and difficult job. I would not have succeeded if I had not been supported by Patrizia Monterosso, by Gianluca Collica (director of the Brodbeck Foundation) and by Paola Nicita from the Academy of Fine Arts. They provided me with ten assistants for the realization of one hundred and thirty pieces of the large ceramic plush toys that are part of the installation in the courtyard. It was very stimulating to think and design for all spaces. I have read and studied the story of Federico II to better face this great project. We covered the facade of the Palace with a video and for the first time the Vicerè Room was granted to contemporary painting. There you find the core of my most important works: the new paintings that are surrounded by historical portraits of the kings of Sicily.

What fascinates you most about Sicily from a sentimental point of view?
We took with my wife Fabia a house with land and three horses in Sicily under Etna near Catania, in Santa Venerina, where we have some friends. When I got off from Berlin it had a certain effect on me, because here I am between Etna and the sea. And there is a specific place where I feel at the center of the universe, right next to an apricot tree, even if some might say I’m nowhere. Sicily represents a wound for me because it is a land that has been abandoned for a long time, so many people have gone away, to America and the North, to look for work. Now there is the hope of a recovery, for example with the gentrification of farmhouses, where people try to take back the land and work it as farmers do, but this too is a science that has to do with time. And it is not only the problem of abandonment, but also that of garbage everywhere, a terrible problem, even in Santa Venerina: when I take a walk and I see things being thrown out of the windows, my heart breaks. Even in the sea there are containers and a lot of plastic. In my opinion many of us feel by now the duty to take back the land with humility and give space to nature. Once there was a self-sufficient system with water wells, which today should largely be reactivated.

In Sicily were you attracted by the landscape, the sea or something else?
After the stroke, I needed to recover and in Sicily I found the strength to go on. In these places, in food and also in language or looks, there is always hope.

How does Fabia collaborate with you? She is an artist and a writer as well.
We have worked a lot in the past and also for this exhibition: in Palermo Fabia made a very important documentary that tells the whole exhibition and the various contributions as well as my work as an artist. I love her, she is my muse, we do different things together, but she too is now making her way. And then there’s Dylan, our son, the only masterpiece I’ve ever done and I couldn’t have done it without Fabia, that’s for sure.

What are your references in the art world?
I have had many in the past, when I felt the need for support. Then at some point you start killing all your heroes. I can say that I always like Cindy Sherman very much, she is truly incredible and amazing, before her time, she anticipated the issues of gender equality. She is a painter even though she is considered a photographer. Her makeup is like painting.

What does Berlin represent for you?
Our house is a bit special, there is a wall in the back garden that borders another building. When we bought the house the wall was destroyed and I wanted to rebuild it, but my wife liked the idea that it was communicating and you could go from one garden to another, so we left a hole through which you can pass. Berlin is just that, a place where you have access to another world. So my son, thanks to this step, goes to visit his many friends. On the contrary, I had a very lonely childhood, due to my parents’ fear of annoyances, illnesses or ailments. I lived like this, but now thanks to my son I live in an open world that breathes. Berlin is contamination, as you can perceive by visiting, for example, the small collection of contemporary art by the collector Ulrich Seibert (http://seibert-collection.art/). There are several interesting realities like this, where one goes and meets many other artists. In Sicily I never saw this kind of spaces.

What do you think about the problem of safeguarding nature and the earth’s climate?
It is a story linked to antiquity and pantheism. The problem is that people must find the divine in things and recover this spirituality: we have abandoned the sea, the Earth, the animals and we must take them back to save the world with our sensitivity and courage. The divine is also in the sea, plastic is complete abandonment.

What is the significance of the sleeping bats we see on display?
Human nature is quite grotesque. During Covid we saw images of bats in soups online and blamed them, but we are much more dangerous than them. I feel we are not far from being all Batman ourselves. There is tenderness in these sculptures, they were not made to scare, also because they represent a type of bat that looks like a dog: they were made with silicone using the molding technique. But, returning to the theme of abandonment and betrayal at the center of this exhibition, on top of the main sculpture in the Royal Palace there is a polar bear and this bear could be all golden and to be worshiped because it is part of our world and childhood. I think of the many children who suffered during Covid: seeing how we forced and isolated them, gave me infinite torment. The plush toys of the sculpture, the teddy bear, the giraffe, the deer and the polar bear: all these animals are part of a dream that has been set aside by the history of humanity, which has to do with a heavy nostalgia.

Is painting what makes you feel better?
Unlike sculpture and photography, painting has always been a very protected way for me to take time and reflect. But in the end it is not the painting that is important. The important thing is to find a way to reflect people, without making judgments, to understand what the temperature of the moment is. You can do it through painting, photography, sculpture, the important thing is to do it. I think that in some ways painting is the most direct thermometer to the soul. 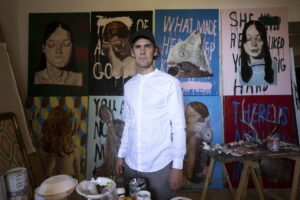 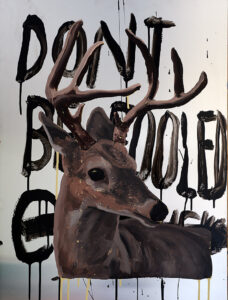 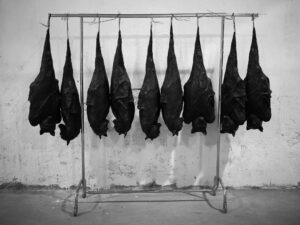 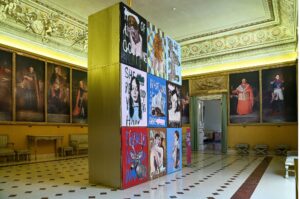 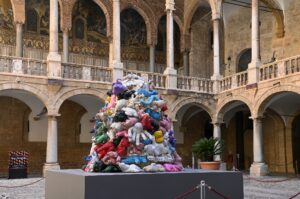 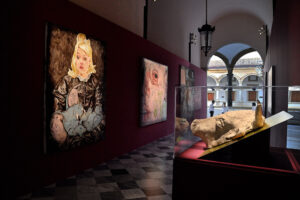