A Symposium for Time is Out of..

Protect me from what I want. J..

In Verona more contemporary art is needed and from this requirement felt by collectors and enthusiasts, Spazio Cordis was born last October, a new independent exhibition venue located in the former clinic of the cardiologist and collector Alberto Geremia. The space, whose artistic direction was entrusted to Jessica Bianchera, is part of the homonymous cultural association, presided by Geremia himself.  His wife Paola Parolin (doctor and poet), the Florentine gallery owner Simone Frittelli and Andrea Mion are also part of. The objective of the group is to propose monographic projects dedicated to young artists with a coherent research behind them, whose work deserves to be supported and valued. Each exhibition is folowed by a paper bulletin that explores the artist’s creative curriculum and by the acquisition of an artwork by the association. To learn more, we interviewed Alberto Geremia, the soul of this project.

Spazio Cordis was born as a natural evolution of your collecting passion. Would you like to tell us about your beginnings in the world of contemporary art?
I bought the first artwork in 1977, I had just graduated. So I tried to find my way in the so-called “art system” by attending the galleries as much as possible. All I needed was a train ticket or my mother’s car, when I could borrow it. I think my “luck” was to have met some “characters” (later to become friends) of the Veronese world of contemporary art that stimulated and guided me in my early years as a young collector. At the same time, I tried to form my own critical conscience, my taste, my awareness, reading everything that I could find. Then, things came naturally, favored both by my job and by the way I bought works of art: I acquired only one work at a time and only when I had finished paying the previous one. This method also allowed me to be less compulsive in collecting: I do not believe in the “sacred fire” that drives the collector to buy, I believe in carefully considered acquisition.

Collecting is an act of love, a search for elective affinities between the enthusiast and the work that will become part of his collection, but sometimes also involves important economic investments. What suggestion would you give a neophyte who wanted to take this path?
Yes, collecting is an act of love, and in the face of love there must sometimes be some sacrifices, but then again, acquiring the work in installments allows you to collect works that at first sight seem far from your reach. Then, if you follow the principle of elective affinity, this allows you to get close to an artist before he has reached important quotations. Furthermore, I believe it is essential to follow and support young gallery owners, for whom it is important, indeed vital, to have relationships with collectors who guarantee a secure monthly income. Last but not least, every effort must be made to find out about the artists you intend to collect, this allows you to understand how much of you might be present in his work.

Until now Spazio Cordis has created two solo shows, that of Andrea Francolino, who officially inaugurated the exhibition venue, and that of Marco La Rosa, both young artists who have been awarded several times in competitions and exhibited in museums and private galleries. These choices seem to highlight a remarkable sensitivity in identifying significant and aesthetically valid poetics, but also an “expert” attention to what happens in the so-called art system. Could these be the main guidelines of upcoming exhibitions?
Yes, the characteristic of “Spazio Cordis” is precisely that of referring to young artists who are working seriously and who, despite having excellent feedback in the international arena, are a novelty for the Verona audience. Our choices – I remember that in the group besides Jessica Bianchera, there is the fraternal friend Simone Frittelli, who all the experts know – are based on this. To understand using a similitude of the world in which I work, when a young man, after years of study, graduates in medicine is clearly qualified to work as a doctor but lives a difficult time: for example he would like to enter the Specialties but the places are limited, he would like going abroad to perfect his profession, but the economic availability is limited. Now Spazio Cordis works – using a biochemical term – as a “catalyst”: it promotes and supports the work of young artists, giving them further opportunities to get involved with a monographic project.

What kind of collaboration is established with the galleries that represent the artists involved in the exhibitions?
A collaboration for the “good” of the artist himself. Ours is a non-profit space, we do not intend to “compete” with the galleries, vice versa we wish a fruitful collaboration that goes above all for the benefit of the artists. Our commitment to always acquire a work for each project proves it, as does the issue of the Spazio Cordis Bulletins, which we take care of, edit and finance ourselves. Any type of input that may derive from our exhibitions is reinvested for subsequent projects, as is implicit in the nature of a non-profit space. Thus we intend to trigger a virtuous circle that allows us to grow and support the greatest number of artists inside and outside the walls of Spazio Cordis.

How was Spazio Cordis received by the Verona public?
We are on the third exhibition, I think it will take some time to become a “point of reference”, but we are witnessing a progressive increase in interest. It will be our task to ensure that Spazio Cordis comes to have an important visibility. Among the new initiatives aimed at opening a dialogue with the city there are, for example, the Ectopies: again a term borrowed from cardiology (and which indicates those anticipated beats that derive from a state of strong excitement) to indicate projects that Spazio Cordis organizes, promotes and supports outside the walls of our clinic. On April 15, for example, we will be at the Church of the Holy Apostles, in Verona, with the work The Argument of the Third Man by Marco La Rosa that will be installed in the central nave for 15 days, precisely during the Easter period. This project, which is based on the Last Supper by Leonardo in the year of the 500th anniversary of his death, is particularly important to me because it opens the dialogue on an interesting and debated topic: that of the relationship between contemporary art and the sacred. It is a theme that I have been following since, at the end of the Second Vatican Council, December 8, 1965, Paul IV called for the bond between artists and sacredness to be strengthened. And on the other hand the idea of ​​founding Spazio Cordis was born from two projects in sacred spaces of Verona: one at the Church of San Fermo, where with Simone Frittelli we set up an exhibition dedicated to the human faces of Christ by Pino Pascali, the other at the Church of Santa Eufemia where we exhibited Walk like children of light by Paolo Masi.

Could you give us a preview of future exhibitions?
In addition to the aforementioned project by Marco La Rosa at the Church of the Holy Apostles, on April 13th we inaugurate at Spazio Cordis Empty room, a personal exhibition by Michal Martychowiec, a young artist of Polish origin who is based in Berlin and operates internationally. His work literally fascinated me and I already fell in love with a work: What remains the poets provide, a chromogenic print of 130 x 100 cm, in which in a pitch-black background emerges a white, almost “angelic” hand, in the act of offering a handful of crystals. As for future programming, we can then anticipate that Diego Tonus and Giulio Squillacciotti will certainly be among the leading artists of the upcoming exhibitions. 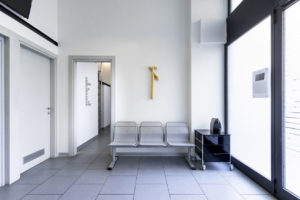 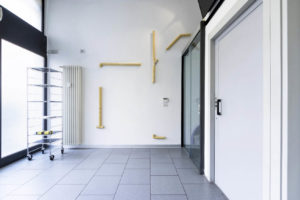 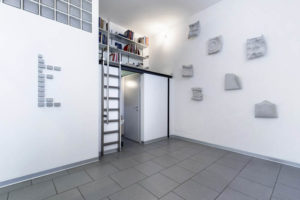 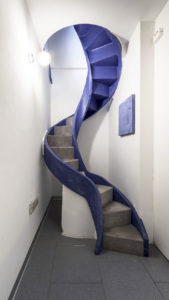 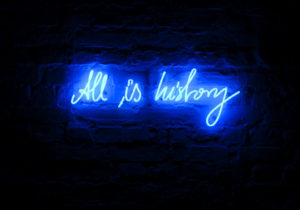 Michal Martychowiec, All is history, 2012