Protect me from what I want. J..

Stefano Arienti (Asola, b. 1961) is an artist who often stands out for a direct comparison with iconography, for the ways in which the history of art recovers the past and gives it back to us in the forms of our time. This is the case of Fiori, the exhibition curated by Angela Vettese that opened last March 25 at Chiostri di Sant’Eustorgio in Milan. While on the one hand the reference to an ancient iconographic theme like still life and, in a more radical sense, of death itself, is explicit, on the other the delicacy of the interventions seems a silent exhortation to life and its wonder. And the reverberation of this invitation is proposed throughout the exhibition, starting from the Paleochristian Cemetery – the beginning of the exhibition -, where Arienti has almost entirely covered the walls with flowers painted in tempera on paper. Here the reiteration of the image recalls the artist’s interest in the processes of copying and continuous reinterpretation, constants of his poetry, and at the same time shows that a gesture – that of reproducing the same flower dozens of times – is a sign that goes beyond the work itself and which finds its true meaning in its execution.

The exhibition continues in the Basilica of Sant’Eustorgio and its annexes, in a path that reminds one of the Stations of the Cross. Along the right aisle of the Basilica and in the spaces of the Chapter Room and the Sacristy we can find most of the interventions, which are kept discreet to avoid disturbing the religious function: photographs of flowers printed on puzzles and mounted on panels, woolen and chenille carpets, scaffolding plastic sheets used as large canvases on which to draw. What is striking is the repeated use of the gold color, in particular when used as a background. It is a gold deprived of any theological value, no longer a symbol of divinity, but the material presence of an indefinite space, which pushes the viewer to pause, to temporarily absent himself from itself and from that dimension of fake familiarity that deceives the experience of seeing. On closer inspection, in fact, gold is the background not for icons, as it would be expected, but for the prints of Van Gogh’s Sunflowers, in an image that could be considered not only as a visionary tale, in which eternal and ephemeral cross, but also like the recapitulation of two different temporal models: the sacred one, in which the past lives in the present to become the place of revelation and salvation, and the profane one, in which the past breaks into the present until it is modified, and opens it to the sudden and unpredictable entry of novelty.

The third and last part of the exhibition takes place on the first floor of the Diocesan Museum Carlo Maria Martini. Here Arienti has created drawings on the dark colored scaffolding taken from the Lamentation of the Dead Christ by Altobello Melone (Cremona, 1490), a painting generally not visible to the public but now, and until the end of the exhibition, displayed near the sheets, in clear sign of continuity and dialogue between the works of the two artists. What derives from it resembles the preparatory drawing for a fresco, a series of sketches that however project their full potential of mystery on a finished work rather than on one to be accomplished. Gold is back, and the idea that in its use is not only the concept of icon and the stopping of time at stake, but also one of the great concerns of classical painting, namely the possibility of capturing light and make it shine. That light that coincides with the creation of a new world: “fiat lux et lux fatto est” (“let light be made, and light was made”, Genesis I, 3).

This does not mean that Arienti’s works on display at the Cloisters of Sant’Eustorgio give rise to a transcendence, or put us in direct communication with the creation of a world, but simply that they reveal how even behind an artist’s secular gesture can conceal such a purpose. 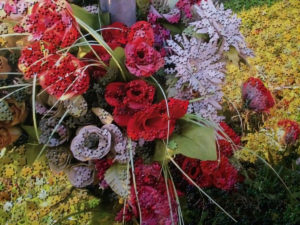 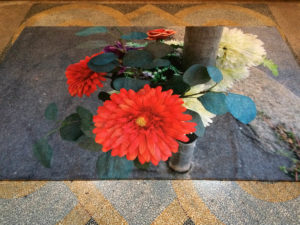 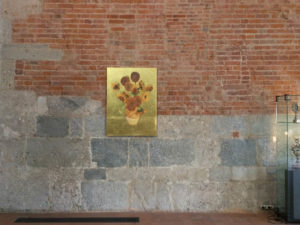