Let us say it right off the bat: the exhibition is a success. The curatorial work, articulating more than 130 works, is up to the challenge of exhibiting the focused prolixity of one of the greatest painters of the XXth century—an intrinsically indistinct category, temporally plastic at heart. Yet this exhibition efficiently shows us how unthinkable it would be to leave Hantaï out of it, in the wake of Matisse and Pollock, two signs under which Hantaï’s work is placed. The 1971 Study, Meun, first cornerstone of the course, dominates the main corridor of the exhibition’s first floor. The “folding as a method” principle, postulated in 1960, is here applied with the sole use of the color black and cardinally extended up to what were its most monumental dimensions. Summarizing more than ten years of formal research around the fold, this all-over repetition of an agitated motif gives a sort of contained endlessness to the canvas, total yet prismatically fragmented. The eye moves in all directions, yet it is not so much about the painting as its resonance with the visible: the eye is supposed to drift, seeing (defocused as it has to become) the work as it sees the world. The Études, Laissées et sérigraphies room, on the last floor of the exhibition, amplifies the power of a colored polarization that doesn’t solely draw its power from the technique, as it is effective even in serigraphy instead of paint. Reenacting a fraction of Hantaï’s never-fabricated stained glass for the Nevers Saint-Cyr-Sainte-Juliette cathedral, this room builds the Hantaï bridge between material and immaterial worlds, recreating one that would have belonged to both of them.

For painting to echo in the world so that a link can exist between form and life; this project is not historically new, but the middle floor of the exhibition is effectively showing Hantaï’s take on it: a monochromatic kaleidoscope, in iridescences of red and its orange tentacles, blues, and yellow among others. As Pierre Soulages, with the 1979 outrenoir (see here), got closer to the mobility and interaction of pictorial and worldly spaces, Hantaï, with these Tabulas made between 1972 and 1982, neared a pictorial whole from its angles. Both through technical configurations intimately linked to the medium of painting, tied to a sort of Pascalian curiosity for its formal nature and its practical coordinates. With Martin Barré, a contemporary of Hantaï as well[1], a community may form that would share an attention to the space of painting and the possibilities of its exploration. This attention is palpable in Barré’s 74-75-C – 113 x 105 (painted between 1974 and 1975, see here), a seemingly unfinished polymorphous cross-ruling of the canvas leading to a superimposition of categorizations concerning the pictorial space. This formal enterprise, as it never blocks links and communications of the painting space with a real one, is not a strict formalization. When Soulages projects painted animation before the flat surface bearing the pigment, the artwork starts receiving instead of giving, modified by the coordinated moves of the light and the viewer.

With Barré’s one of several Objets décrochés, a 1:1 (see here) photograph of a door hung on the wall immediately next to it, art can literally and prosaically displace life: it is again about communication, about what reality and art have to tell and to do to each other. Barré does so with the joint and conflictual creation of a deceptively visible and a transparently created, leading both to the starting point of Hantaï’s fold, its liturgic value, and its implications regarding a solitude of the pictorial space. Indeed, it all started in 1950 with a shroud, a piece of cloth outlining the contours of a body hidden by the opaque and suggestive textile surface, which gave birth to a Mummy that gradually led to “the folding as a method.” The trajectory toward a formality of painting, in which Hantaï fully engages in 1960 through the aforementioned principle, is aligned with his magnetization toward a spiritual type of immateriality, a distinct (active and moving) presence of the void to which he explicitly returns as the end of his course approaches: in search of “immaterial colors”, with the unequivocally-titled Shrouds (on the left side of the image, next to a 1982 Lilac tabula). This comeback after nearly 20 years of absence is almost Christic: as Hantaï reaches his artistic end, his color dissolves in space.

A dissolving that concludes the deactivation of pictorial insularity. The porosity of an alleged frontier grows almost naturally from the 1960s—when the canvas is a crumpled, almost mistreated object—to its 1972 gridding: as the method then arrives at its maturity, colors become fully operative tools for the construction and signaling of an orthogonalized and dominated pictorial space. Its infinite profusion, the inexhaustibility of its expressions (somewhere between color, form, variation and the power of the reserved withes—active voids in Hantaï’s pictorial space) come from a retreat, a backgrounded control brightly echoing the contained liberty of the 1971 black and white Study, Meun. The baroque multiplying of differences produced at this stage brings back up to the origin of the word: irregular, Hantaï’s aesthetic being baroque since its first fold. In the already-evoked 1980 yellow Tabula, [Paris], the fold reaches a striking surpassing of the static nature of the flat quadrangle: the pictorial surface beats, yellow squares twirling with and across the white boundaries that shape them, twinkling on a mysterious yet vivid rhythm. Hantaï’s painting revolves around its facticity to the point of sometimes opening its doors to the eye—and this is what the white stripes do: creating deepness—, at times erecting itself before the viewer like an indented wall (what the 1971 Study, Meun would do), extinguishing at the end of its trajectory and, in the 1980 yellow Tabula, entering the eye like an arrow. Hantaï’s painting is a dance around painting. A moving course—in both the affective and physical senses—worthy of the magnitude of its display, which rightfully canonizes a pictorial Dominican. 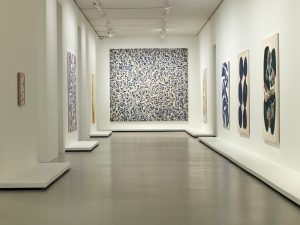 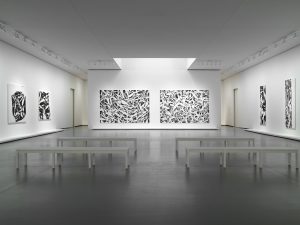 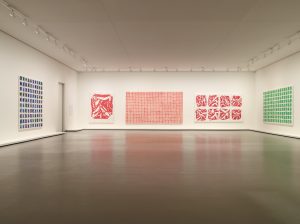 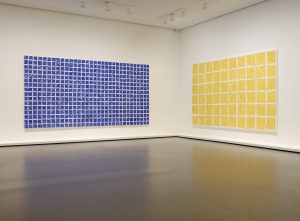