The immanent sacredness of Kahuna

The immanent sacredness of Kahuna 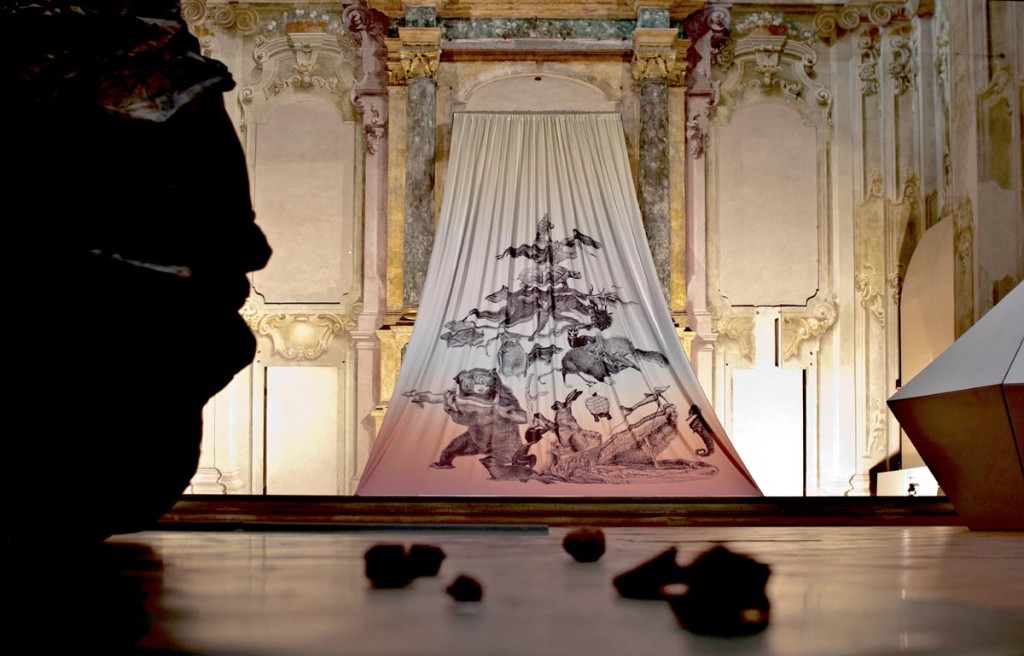 The greatest masterpieces of Western art history have been created thanks to a centuries-old religious patronage and the willingness of lay commissioners to flaunt a magnificent devotion to facilitate their access to Eternal Life or some diplomatic relationship in the earthly one.  Artists have always been confronted with the Sacred, which with the advent of modernity has lost a specific dogmatic connotation to melt into a generic need for spirituality understood more as a personal refuge than as an aspiration to reunite with the Absolute. Even the artistic production, rather than directly confronting an essentially unknowable field, has preferred to immerse itself in the chaos of the real and virtual world (and of the worldliness) and to return the otherworldly dimension as a latent and sometimes unconscious suggestion.

Since 2017 the young curator Leonardo Regano has been investigating the persistence of the Sacred in the visual arts with a project of annual group exhibitions, so far held in the evocative scenario of the former Church of San Mattia, conceived as sample mappings of how the relationship between art and spirituality is expressed in the language of the involved artists in relation to a particular aspect of this vast and unresolved topic. While the first edition, entitled Sequela, focused on the possible creative incarnations of a contemporary approach to the Catholic religion, Kahuna explores, following the common thread of the twentieth century studies of Max Freedom Long about the homonymous Polynesian shamans, the ability of the work of art to suggest a not mediated relationship with the sacredness inherent in Nature. The exhibition path, studded with soft lights, distant sounds and spaces of reflection that amplify the range of action of each work left free to breathe and merge with the place that welcomes it, is conceived as the theater of an experience that becomes shared and choral.

The first stage of this initiatory journey elaborates the idea of Nature from a scientific and conceptual point of view, showing the limits of a rational obsession destined to break itself against the elusiveness of a superior logic that transcends human efforts. Pinuccia Bernardoni’s installation is a proliferation of curved shapes generated by the geometric interpretation of the structure of a banana leaf transformed into an abstract object by drying and a repeated circular punching. Circularity as a spiritual and biological principle returns in the stucco and encaustic painting by Nobuya Abe, who conceives an ambivalent primary form between the zero symbol of the Buddhist void and a cell about to split and reproduce, both ancestral images of closeness to the Divine. Giuseppe Penone‘s herbarium, obtained from the frottage of 33 different herbaceous species, shows the physical involvement of the artist committed to detecting, manipulating and introjecting a never exhaustive and definitive catalog of forms. His direct involvement with natural matter also raises in him thoughts about the ineffability of the artistic inspiration he chooses to inscribe in the vegetable skin traced on paper as if they were new buds waiting to grow.

In the Alessandro Saturno’s veiled and floating canvas, which introduces the mysterious heart of the exhibition, Nature is represented as a luxuriant forest of signs about to melt into a dense atmosphere in which the glimmers of the sunset mingle with the first lights of the Sunrise. Life is the miraculous aggregation of simple and terrible elements that flow in all their majestic power under the surface of things and each of their external manifestations takes on supernatural characters. These suggestions refer to Arthur Duff‘s installation My Veins formed by a series of lava stones connected by a capillary system of cables that support bright vermilion letters, an explicit analogy between the incandescent magma expelled from the earth during volcanic eruptions and the blood that circulates heat in the human and animal organism. At the opposite extreme is Amandine Samyn’s work that revisits the aesthetics of the Sublime in a sequence of small canvases evoking uninhabited Arctic landscapes, taken from photographic images found on the web, foreshadowing their future dissolution due to the global climate warming. The harmony between the elements that the irresponsibility of man risks to breake is the image of Creation and precisely the balance of a light structure modeled by the shape of the air is the main characteristic of the balloon made by First Rose, artistic duo composed by Andrea Del Bianco and Fabrizio Favale who will animate the exhibition with a themed performance program.

Continuing the exploration, one enters a more undefined and rarefied mental zone that collects the most intensely permeated works of spiritual questions, in which natural materials and forms seem to abandon their phenomenological matrix through an aesthetic intuition that makes explicit universal questions without wanting to offer any impossible answer. So Golzar Sanganian’s swing, formed by a file of white sheets of paper held by iron chains and emblematically suspended above two ancient gravestones belonging to the church, alludes to human frailty and its perennial oscillation between error and uncertainty . But just the experience and the tenacity in wanting to write his own story, even without being able to know the outcome, reinforces the individual as the overlapping of the sheets manages to counteract the pressure of the chains that hold them together. The perfection of the Platonic solids and their esoteric rationality instead inspires Sabrina Muzi’s habitable sculpture, which has a diamond-shaped wooden structure in which the spectator is invited to lock himself up to perceive himself from within. Among the various possible cuts, the artist chose the hexagonal one in appropriate analogy with the shape of the carbon molecule, whose compounds form the basis of life on Earth while the carbon-nitrogen cycle provides part of the energy generated by the stars. Carbon is also a product of combustion, a fundamental procedure in the execution of Sophie Ko’s Temporal Geographies, thin glass cases modeled in the form of stalagmites that contain ashes of burnt images and powders of pure pigment. The unpredictable upheavals of these materials over time produce new images that oppose their silent material evidence to the fate of dispersion usually reserved for ashes. Imponderability also animates Gregorio Botta’s  work, a fascinating mobile sculpture composed of Tibetan bells of different sounds that rotate following random trajectories.

The final part of the exhibition, located near the apse, presents a courageous admission of impotence and defeat, perhaps the only possible attitude to restore a genuine relationship with the sacred: the large canvas painted by Claudia Losi placed in place of the altar greater is a painful figurative montage of endangered animal species, real sacrificial victims of the degradation of human ethics, while Cosimo Terlizzi materializes the twilight of traditional values that the society of image and consumption has transformed into golden goods of exchange in a disturbing family portrait. Will the unconsciousness be enough to save the executioner from divine condemnation? We are not aware of it and each of our questions will dissolve in the eternal flow of things like the halo of the saint leaking from the sacrificial lineage where the ax of martyrdom is still entangled. 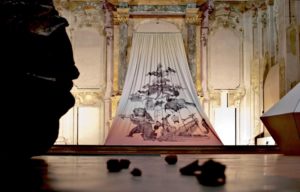 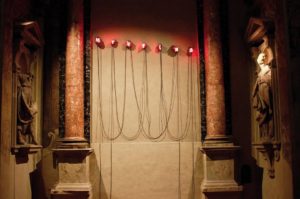 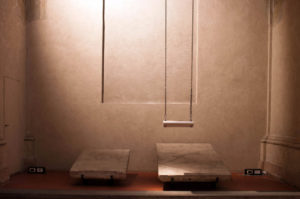 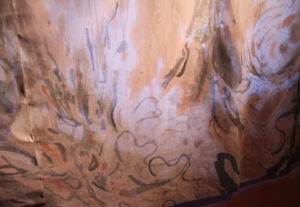 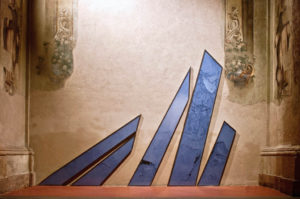 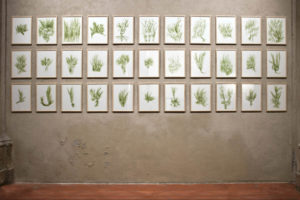 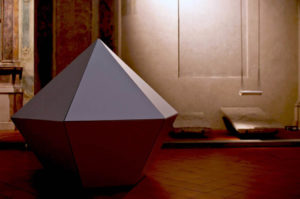 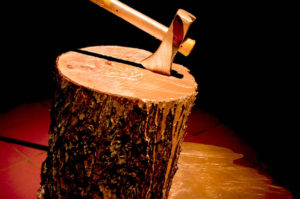 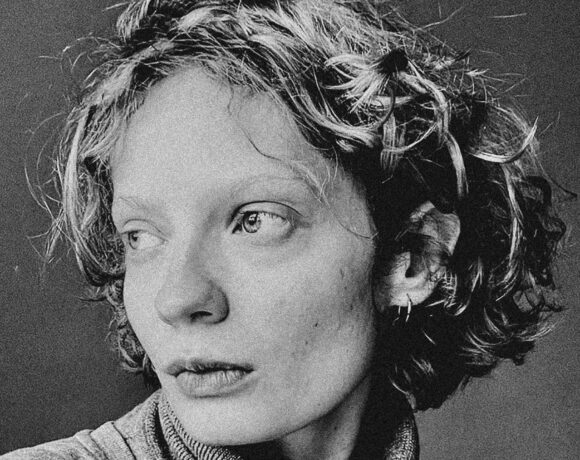 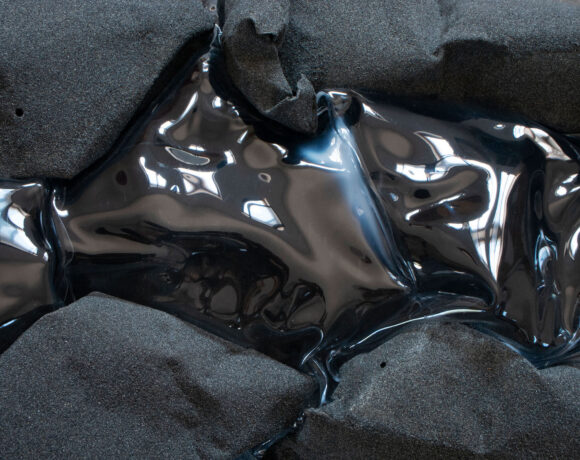 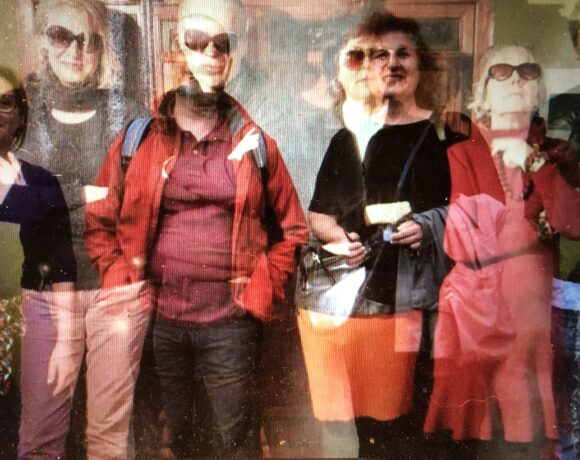