In conversation with Lorenzo B..

The LUMA Museum by Frank Gehry, a mirrored steel tower emerging from a circular platform, has certainly given, a bit like the Guggenheim Museum in Bilbao, a great economic, cultural and tourist boost to Arles. It is a work sponsored by Maja Hoffmann – co-owner of the pharmaceutical laboratories Roche, collector and patron – that realizes one of his wildest dreams for an investment of more than 150 million euros.

In 2004 Maja Hoffmann created the LUMA Foundation in Switzerland. LUMA is interested in the interrelations between art, culture, human rights, environmental issues, education and research. Since 2010 the foundation has supported and presented the work of more than one hundred artists, thinkers and innovators in different locations city of Arles, and since 2013 has supervised the transformation of a former industrial site of eleven hectares, in the Parc des Ateliers, located next to the most famous sights of the city, which are part of the UNESCO World Heritage Site.

Without making judgements about the architectural work, the circular glass base that covers the first two floors takes away momentum and brightness to Gehry’s work that, inside, is completed by a series of interventions by the artists Philippe Parreno, Rirkrit Tiravanija, Etel Adnan, Carsten Höller, Liam Gillick, Ólafur Elíasson.

Upon entering we find the Carsten Höller Isometric Slides. You can enjoy the fun effect of the toboggans at the second level by going down thanks to gravity; after the exciting slip, the person recovering from it starts singing along with other employees. It’s Tino Seghal’s performance. On the other side, looking upwards, under the flight of stairs, here is the work of Ólafur Elíasson Take your Time, a large circular mirror fixed at an angle to the ceiling that, slowly rotating on its axis, It creates a vortex sensation that destabilizes our perception of space.

In the South Gallery we see the film Danny / No More Reality by Philippe Parreno, a project regulated by mechanized processes, coordinated and controlled by algorithms-ca technology: the film brings together the entire filmography of the artist. Going up to the first level, the Auditorium welcomes us In the forest of Etel Adnan, a ceramic mural that covers a wall about fourteen meters long and four meters high, which represents, with bright colors, the movement of trees triggered by the force of the wind. Also, on the next level, Liam Gillick’s Laguna Gloria in which the artist used footage from his 2013 feature film, Margin Time 2 (The Heavenly Lagoon), in a room that evokes an artificial garden.

On the ninth floor there is the terrace, from which you can enjoy the view of Arles and its Roman buildings. Reaching the open space of the eighth floor we find the minimalist work of Konstantin Grcic, while along the stairs you can admire Day Light Songs (biting the air) by Helen Marten, composed of several layers of glass and aluminum frames: within three spans the artist uses multiple ancient and contemporary techniques such as acid etching, casting, enameling, sandblasting, silver coloring, screen printing and painting. A work designed to change with light and depending on the ascending or descending path.

For a pleasant relaxing break there is the Drum Café, located on the ground floor, designed by Rirkrit Tiravanija as a habitable art work because of its stainless steel walls, exposed tubes and panels of sunflower pith. The designer uses materials from the Camargue bioregion and natural resources such as sunflower pulp, Arles merino wool or pigments and dyes from the surrounding invasive plants. A monumental tapestry, ten meters long, made with the artisans of the French factory in Aubusson, represents those faded sunflowers that can be seen going towards Saintes-Maries-de-la-Mer.

In the various plans other surprising works such as Endodrome, in which the virtual reality created by the artist Dominique Gonzalez-Foerster continues his research on alternative states of consciousness and interiority. Again, the work of James Barnor: «Stories. The 1947-1987 portfolio», presented as part of the «Rencontres d’Arles» and the «Living Archives» programme of the LUMA Foundation. From the first demonstrations for the independence of Ghana, Barnor began his training in a photographic studio in Accra. In 1987, after his activities as an official government photographer ended, he worked in Accra, his hometown, and London, his adopted city.

On the lower floors other exhibitions: from the giant mushrooms of Carsten Höller to the «Hans Ulrich Obrist Archives – Chapter 2: Etel Ad-nan», which celebrates the long collaboration between Hans-Ulrich Obrist and the poet Etel Adnan, famous for Sitt Marie Rose (The Post-Apollo Press, 1977) about the Lebanese Civil War. Then we find the extraordinary work by Julien Creuzet entitled Orpheus was musing upon braised words, under the light rain of a blazing fog, snakes are deaf and dumb anyway, oblivion buried in the depths of Insomnia. After a slalom between installations we find ourselves in front of a video in which avatars dance and perform in different African traditions, including those of the African diaspora.

Once outside, we are in the Parc des Ateliers, which brings together seven historic industrial buildings that belonged to the French railways, five of which were rehabilitated by the German architect Annabelle Selldorf. The surrounding gardens and public park have been designed by landscape architect Bas Smets. The thirteen meter high pink sculpture Krauses Gekröse by Franz West is very imprsssive.

In the Mécanique Générale building, the «Prix Dior de la Photographie et des Arts Visuels pour Jeunes Talents» is held, and one of the most acclaimed exhibitions in the «Rencontres d’Arles» held in the Provençal city from 4 July to 25 September 2022 under the artistic direction of Christoph Wiesner, during which more than 40 exhibitions and 160 artists, including well-known names and emerging talents, will be held. This is «Performing A Feminist Avant-Garde», curated by Gabriele Schor, which presents more than 200 works by 71 artists of the VERBUND COLLECTION in Vienna, built since the seventies. Developed on five themes, the exhibition presents the work of artists who have proposed a new “image of women”, denouncing sexism, social inequalities and patriarchal power structures.

In the Mécanique Générale and the Grande Halle Arthur Jafa’s exhibition «Live Evil» includes a series of recent works created specifically for the occasion. His films, a relief, a series of photographs and sculptures, large installations with images assembled on large backgrounds, large advertising billboards and two built environments address different aspects of black culture. And finally, a break at the Café du Parc, admiring the beautiful mosaic floor entitled MEMORY by Kerstin Brätsch, made with paintings by the artist. Ultimately, an exceptional architecture that welcomes works of great visual significance. 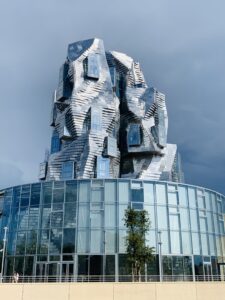 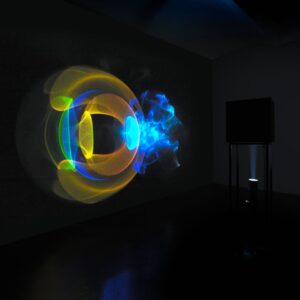 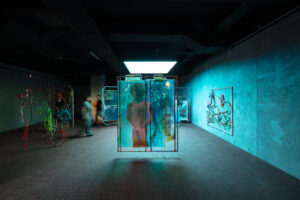 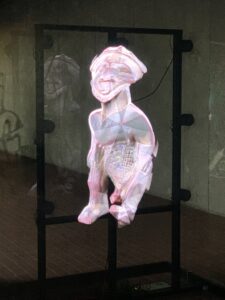 Julien Creuzet, Orpheus was musing upon braised words, under the light rain of a blazing fog, snakes are deaf and dumb anyway, oblivion buried in the depths of insomnia, ph. Emanuele Magri