The new is coming. First impressions of ArtVerona ...

The new is coming. First impressions of ArtVerona 2022

There is an air of exchange and interrelation at ArtVerona, a contemporary art fair now in its seventeenth edition, which this year rethinks its role on the international scene now deliberately claiming its desire to keep its identity vivid. The artistic director himself, Stefano Raimondi, shows his determination by declaring verbatim the distinctive elements of this year: “[…] A well-defined identity, a surprising visit experience, attention to the reception and involvement of collectors and the territory, respect and dialogue with galleries and all cultural operators”.

With the introduction of the new curatorial projects – Visiting Curator, Habitat, Curated by, CAMERA, to name a few – within the program the myth of the fair event aimed exclusively at sale, a mere container of works of art, is gradually dissolved, not only by a general public but also by an academic slice of professionals in the field. The current artistic direction is therefore surrounded by art historians, critics and independent curators – Jessica Bianchera, Ginevra Bria, Giacinto Di Pietrantonio, Marta Ferretti, Giulia Floris, Elena Forin, Maria Marzia Minelli, Claudia Santeroni, Maria Chiara Valacchi, Saverio Verini, Domenico Quaranta – to refine the dedication and attention to Research and Curation.

Although the initial intentions seem to presage a good outcome, there is no lack of a clear division of opinions on the part of exhibitors: on the one hand, the projects for the enhancement of emerging artists are accompanied by great enthusiasm and satisfaction for the work done by Raimondi; on the other hand, the expectation of historical gallery owners towards the choice made by the fair to open its gate sfor the preview at a time that is not really appropriate and decidedly restricted, from 18 to 21 on Thursday 13 October, was discussed.

Despite the uninspiring premise, however, some projects worthy of being mentioned are underlined, not only for the selection of artists but also for the desire not to be limited, on the exhibition level, to the umpteenth revival of the “stand-showcase” model. The revolutionary choice was that of the Parmesan gallery Niccoli Arte Moderna (Main Section), whose founder chooses not to exhibit works to sell them – going against the nature of the fair event – but to make known to the Italian public the young emerging artist Jessica Wilson, with the project, curated by Massimo Belli, I knew you were trouble when you walked in. Made up of large-format paintings that blend the artist’s love for American abstract expressionism with the historical memory of the Italian Renaissance, the work is nothing more than a process of synthesis, with the sign and with the plastic material of color on an aluminum plate, starting from Pontormo’s Visitation of Carmignano.

For Introduction project, which sees the historical galleries promoting the younger ones, interesting is the choice of Galleria Continua, which proposes the Art Noble Gallery. Its founder Matthew Noble expresses his strong interest in painting by addressing the generational theme and exhibiting works by Martina Cassatella, Roberto de Pinto, Emilio Gola. Three ways to say painting. It is the intimate and personal one, although young but heir to a rich pictorial tradition. If Castella’s work is defined by the gallerist as “mannerist” for the meticulous attention dedicated to the representation of the hands, De Pinto’s encaustic characters wink at a Mediterranean figurative tradition, but in slightly deformed and grotesque forms.

“Every generation is a new people” is the strong and incisive opening of Lunetta11, which after the monographic stand dedicated to Andrea Barzaghi in Arte Fiera 2022, has proudly flanked the painting of young artists such as Ismaele Nones, Brian Belott, Edoardo Manzoni, Pierluigi Scandiuzzi, Simone Settimo, Solomostry to the work of Francesco Menzio (1899-1979), to trigger unexpected ties and to recall the words of Francesca Alfano Miglietti, for whom “art has no age”. “There is no young art”, in fact, but only “young artists”.

For Pages, a section curated by Ginevra Bria that combines art and publishing realities, Ginevra Petrozzi, recently protagonist of a performance on the occasion of Beyond binaries (AlbumArte, Rome) brings to the stage, for the Onomatopee cultural center (Eindhoven), A Funeral for Digital Data, a real “funeral of data”, today the ultimate custodians of individual and collective memory, inviting the user to share any experiences of “loss” of data and recovering the ritual component within a contemporary society orphaned by the symbolic dimension.

For Solo – a section dedicated to monographic projects – NFTower exhibits the artistic duo Neurocinema, an extremely innovative project able to give the viewer a unique visual experience, where the succession of video sequences changes according to the brain waves read through a special sensor. Each video brings the viewer back to the center of the artistic experience, giving him part of the creative responsibility, and can be purchased in the form of NFT at a cost of 1 Eth. 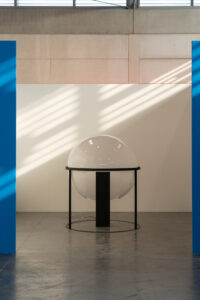 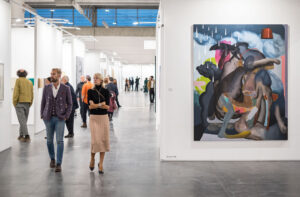 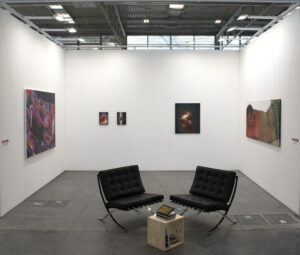 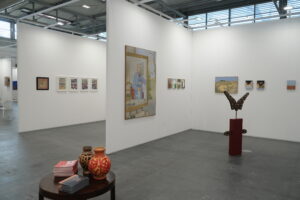