Tomas Rajlich: Between Grids and Monochromes

Tomas Rajlich: Between Grids and Monochromes 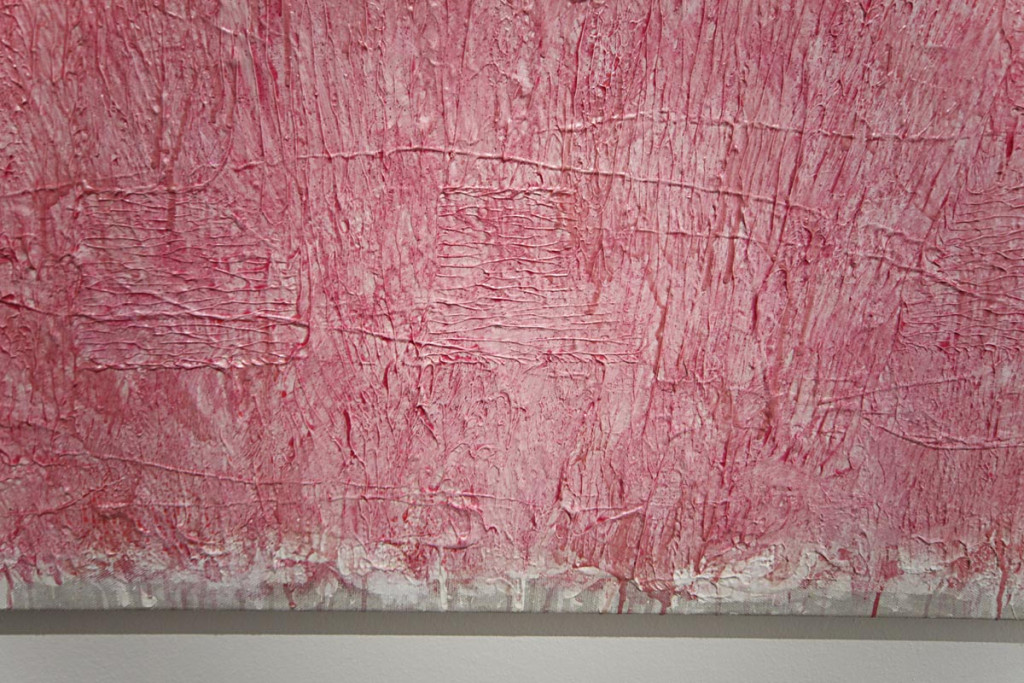 In the ABC – ARTE Gallery in Genoa we get absorbed in what is considered a real anthology of the Prague avant-gardist Tomas Rajlich.  Half a century of paintings, from the Sixties to the present, covers the whole exhibition area, where there are two essential protagonists: industrial and modular grids on panels and canvases, characteristic of Rajlich’s early works, and the recent monochromes that explore the combination of gesture and light. The trademark of all his oeuvres is certainly their instinctive and vital force, but behind that, there is always a regular and elementary “structure”, linked to both the drawing of the grids or the monochromes.

The aim of the exhibition curated by Flaminio Gualdoni is not to highlight the contrast between the oeuvres of the ‘70s and the current ones, but, by combining works from different periods, it offers to the observer a sort of visual continuity. Despite this mixture, the differences amongst the works can be felt, from the painting stroke to the technique used.

Almost all of his works are acrylic paintings on canvas, while the early ones are often painted on wood panels; most of them are “Untitled”, as if he wanted to further confuse the observer and drag him or her towards an undefined time and space, a perfect mixture of past and present.

In the essay dedicated to the exhibition, the curator talks about a colour that totally fills the canvas and that is not subjected to any instrumental and component logic. I think that this logic is simply and outwardly “hidden” by blinding and bright colours, a pretext that the artist implemented to get closer to a stronger concept of “contemporaneity”, a passage to the new that does not cancel the balance of the component structure. Even though Rajlich uses the colour in an instinctive way, it always appears under an imaginary “grid” that links it to rationality. The technical execution of some of his large works certainly confirms this logic; in fact, right in the most recent ones including “Untitled”, “Chang Fei” (2003) and “Brigantia” (2002), the canvas is the frame of the work; a real self-framing.

I believe that the artist has never given up his structural criterion and has always followed a well-defined path adding a dense matter that hints at the irrational and confuses the observer’s sight.

As we enter the gallery, the first thing we notice is the video projection of the artist’s most significant work, so that before enjoying the real work, this preview will prepare us to look at the whole Rajlich exhibition.

In the various rooms, we wonder which works belong to his past and which ones to his present, in fact, the canvases are mixed according to “setting and colour” and not to periods of time; or better they are laid out according to “atmospheres”. Each room reflects a feeling, an emotion, and a mood: we pass from black to pink, from sky-blue to gold, from white to fuchsia, from silver to orange.

5 Rooms, 5 Settings, 5 Moods. Lines, grids, and materials unite all that by snaring the observer’s eye and making him or her think about a personal introspection: a real narration of existence.

Entering the first room, we find at once the first “grids”, three of Rajlich’s works painted in shades of opaque grey and a large golden canvas made in 1983. In those years, the artist already worked with flaming and bright shades; as the curator said “Colour is, and offers itself, as a substance that is itself to be seen, as image: as light”.

The second room is surely the one which best describes Rajlich’s contemporaneity; it is represented by his three enormous canvases (220×200 cm each, approximately) made between 2002 and 2003, painted in orange, pink/fuchsia and white. Light lies in the solid and dense acrylic colour, and it comes not only from almost pure colours but also by brilliant dust, that overlaps the canvas. In the same room, there is a dark black panel 40×40 cm, “Untitled” (1969), which contrasts and distracts the visitor’s attention from that brightness which he/she was used to.

Walking into the third room, we see three other works painted in pink shades, the same painting line but different periods. Opposite to them, one of the most monumental works “Untitled” (1978), a large black canvas, 250×210 cm; the paint, like the colour, looks solid and opaque on the most part of the surface, only in a small lower portion can we see a grid “imprisoned” by the acrylic colour itself.

In the fourth and fifth exhibition area, we find works with different features and colours: bright white, opaque grey, silver, orange, and purple. Several canvases in these two rooms have a texture that recalls corrugated cardboard, as if the artist had scraped and scratched the colour on the canvas.

The work that catches my attention is “Untitled” (2010), with a pure white that becomes ochre; the material emerges framed by the canvas itself; almost simulating a Polaroid it seems to create a painting on photographic paper, a frame of life captured by Rajlich and given to the observer.

This solo exhibition follows a disarming circularity, where time does not exist and the years of production merge into one another. As the curator says at the end of his essay: “Picture after picture, the spiritual strain of Rajlich’s painting evolves, breathes, lives. In these works, the actualistic element, the original component of the avant-garde feeling pales and the painting remains: “an area of purity, beauty, well-being, concentration, simplicity, essentiality, integrity”. 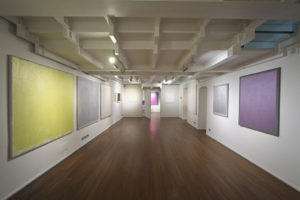 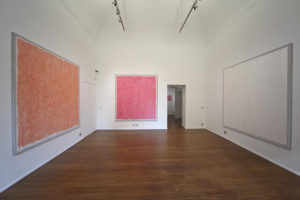 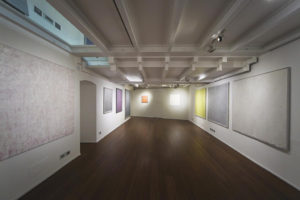 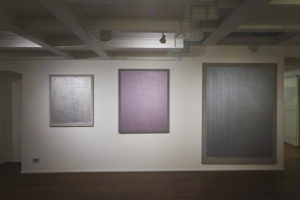 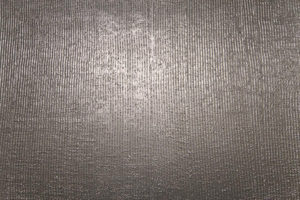