Tursic & Mille: the French duo on view in Nap...

Tursic & Mille: the French duo on view in Naples

A continuous line drawn on a continuous flow of events. A simple variation changes its sign, something else is created, branching out into it, exploding into infinite situations. History observes and participates in the change, maybe it mocks it, maybe it remains impassive, it leaves the unfolding of the facts to others. Not everyone can understand this existentialist philosophy, but the pictorial gesture of the artistic duo Tursic & Mille does not shy away from this discourse. Their “disasters” tend to separate each event in this flow in order to explain it according to their own vision. 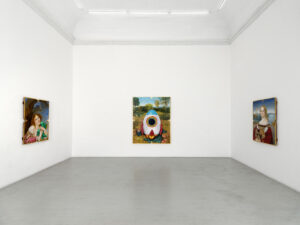 The art by Tursic & Mille – couple of French painters born in 1974 – is enigmatic and emblematic. The duo realizes works that are nonconformist, countercultural, subversive and poetic, all at the same time. A fresh, unconventional freedom emanates from their material and figurative gesture. They are always looking for new stimuli so as not to lapse into a routine of limiting ideas. This pictorial language wrestles with stillness, everything seems to be always in motion, heedless of judgement and hearsay. Following this line, Disastri (Disasters) is the exhibition in which painting and semiotics are tasked with showing “what would happen if…”. Dystopian and utopian hypotheses, the background on which this kind of painting is based on are real events told with emphasis, such as in the political, economic, social or ecological field. A sort of Dadaism mixed to a Surrealism dwells within the works, the generative process of which is the result of often playful reflections, but not to be understood as having been treated with superficiality. 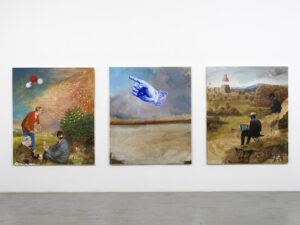 In Alfonso Artiaco’s famous Neapolitan gallery, Tursic & Mille came back for their third solo show with a sequence of works in which the concept of “disaster” is both generator and destroyer. Generator of consciousness and destroyer of certainties, generator of fantasy and destroyer of materiality. “What is truly real in what we see?” this is the question to ask facing the paintings that the duo exhibits in the gallery: they are the place in which to question and think empirically about the nature of things. It is a continuous process of courses and recurrences, of signs and gestures that always generate something new, something to think about again. The pictorial detail is crucial: the layering of the depicted elements makes it impossible to go back in order to only look forward. This is why the artists chose to bring three works by great masters (Bosch, Greuze and Raphael) into this era, at this precise moment in history, by adding a new, contemporary detail to a well-known artwork. This intervention makes it possible to see from another perspective the generation (or the destruction) of a historical classic in favor of an unfortunately rather rambling contemporaneity. This uncertainty of image acts as a springboard to all the other paintings in the gallery: a Magrittian representation of reality that is subverted and mixed to elements that do not exist in their tangible essence but that, at the same time, are real in the human thought. The Alchemist is the oil on canvas that (maybe) best clearly expresses the “disastrous” principle of this French artist couple: the transformation of an element into something to be discarded under the amused eyes of the people reaches the apotheosis of that change that everyone washes their hands of. 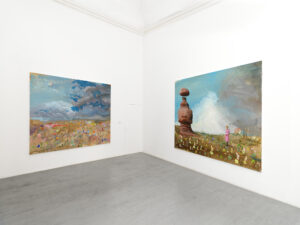 For Tursic & Mille, nothing is real, but everything is licit: not everything that is fake news is made-up stuff and not everything that is factual is natural stuff either. What they are talking about should indeed be taken with a pinch of salt, but the founding message of these paintings should not be lost. Every sign and gesture, albeit small, will change the flow of life, not everything has already been represented, it is not possible to paint on a blank canvas if this is no longer white.