Other Spaces by United Visual ..

Art in Roppongi is everywhere: practically, one breathes. Not just museums (including the world-famous National Art Center of Tokyo, the Mori Art Museum and the Suntory Museum of Art). Not just a myriad of excellent private galleries (including Emmanuel Perrotin, Wako Works of Art, Ota Fine Arts, London Gallery).

Also many works, modern and contemporary, that become enjoyable only through a simple walk in the neighborhood. Let’s see some of them, but I warn you: the list isn’t exhaustive.

We begin our journey starting from the small park, right in front of the exit of the Nogizaka station (Chiyoda Line), which houses the house and the sanctuary of the Meiji-era general, Nogi Maresuke, a military man who, in 1912, adhering to the dictates of samurai ethics, did seppuku, with his wife, to follow the Emperor in death.

This complex, which was destroyed during the Second World War, was rebuilt in 1962 with a project by Oe Hiroshi, a well-known architect in Japan.

Right at the main entrance, on the Gaien-Higashi-dori, we find the first of the works: a large sculpture by Tsukui Toshiaki (“Hineri ・ Utsuri ・ Nagare” 1996), which, in fluid and colorful twist, harmonically symbolizes nature and the slow and inexorable passage of time.

Continuing on the same sidewalk, towards Roppongi Crossing, a few hundred meters ahead, a bronze “dream” by Kan Yasuda, a Japanese artist who artistically grew in Pietrasanta, awaits us in the beautiful square in front of Tokyo MidTown: “Myomu” (Like a dream) with its big circle in the middle that envelops thoughts, memories and fantasies. This is a work that can be admired, made of marble, in other places in Japan and also in Italy, in the Station of Pietrasanta, near Lucca.

Inside the complex, the marble sculpture “Ishinki”, another icon of Yasuda’s artistic production, to touch: “Time is not touchable – says the artist – but the sculptures can be touched. Through the sculptures, people touch themselves”, while receiving, like children, all the sensations that come from touch.

In the side park, a few meters from each other, first, on the left, a mirror-polished cast stainless steel sculpture by the British Tony Cragg, “Fanatics”, oval-shaped reflective geometries and cross sections that hide innumerable profiles of people: counting them becomes a challenge, then, on the right, unfortunately almost invisible these days due to work in progress, a monumental “Fragment No. 5”, in aluminum (210 pieces) by the German artist Florian Claar, a cave (or abyss), unusual and unexpected, in the middle of the metropolis.

Continuing we cross Roppongi Crossing and take the road to the right. A giant spider with its bag of marble eggs awaits us at the Mori Tower. Filiform and light majesty of a splendid bronze “Maman” (1999) of the immense artist Louise Bourgeois (French by birth but American citizen since the early Fifties). The sculpture is a tribute to motherhood in general and to her mother in particular: “The spider is an ode to my mother. She was my best friend. Like a spider, my mother was a weaver. My family was in the tapestry restoration business and my mother took care of the lab. Like spiders, my mother was very capable”.

At the foot of the Mori Tower, taking the road that leads to Azabu Juban, on the right side of the road is the bench, “Arch”, by the Florentine architect and designer Andrea Branzi, who, at the same time, restores public space and private space in perfect symbiosis, a kind of artistic fissure in space time (or, as Umberto Eco would have said, citing Vonnegut, a “chrono-synclastic infundibule”).

And then, the last work of which we will speak about: the Kin no Kokoro (Golden heart) by the French Jean-Michel Othoniel, a large sculpture four meters high in gilded bronze. Inserted, since 2003, in the gardens of the Mori Tower, between the green and the pond, it was placed there to celebrate the ten years of the complex and the annexed Museum. It is the metaphor of Love in its broadest, most universal sense: strong and fragile at the same time. And the work, as well as Love, is changeable, depending on your point of view.

It is worth investing some of your time in Roppongi… still, by searching, you will discover a “Nereid” by Emilio Greco, the “Guardian Stone” by Martin Puryear, the “Roboroborobo” by the Chinese Choi Jeong Hwa and many other works again.

And after so much research of Art, perhaps, enjoy a bit of well-deserved rest… in the Art, stopping a few minutes in “The calm island” by Ettore Sottsass junior. 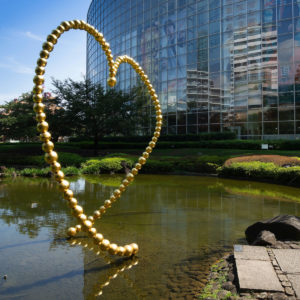 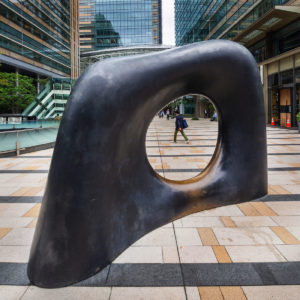 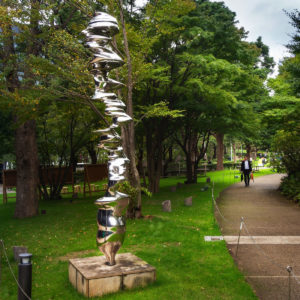 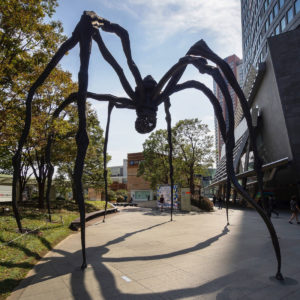