Vantees in Bologna: all roads ..

NishiShinjuku (West Shinjuku) is known as the district of skyscrapers. In this area, in fact, since the early Seventies (also in view of the fact that it is one of the least seismic areas of Tokyo), began the first massive urban development of the city.

Here are based large hotels, financial and insurance companies, universities and, above all, since 1991, the Town Hall, the Tocho (a project by Tange Kenzo that has now entered, thanks also to manga and anime, in the Japanese collective imagination as a powerful symbol of authority and resistance).

Today we will have a short walk, but very dense: a real art oasis surrounded from the concrete of the buildings designed and curated by Fumio Nanjo and Associates in the early 1990s.

It will be enough, in fact, to follow the wide perimeter of one of these skyscrapers, the Shinjuku I-Land Tower, to come across a small, but well-stocked, open-air museum.

It is possible to arrive in this area with the Marounochi Line (NishiShinjuku stop) or with the Oedo Line (Tochomae stop).

Arriving with the first line, immediately after the turnstiles, taking the nearby exit on the right you come out right in front of one of the two majestic sculptures by Roy Lichtenstein settled around the complex: the Tokyo Brushstroke II (1993), a strong three-dimensional “brushstrokes”, from bottom to top, of solid aluminum, in four colors. And, of course, unmistakable and inevitable points of Ben-Dai.

Fifty meters ahead, on the same sidewalk, the second sculpture, bigger and more slender: Tokyo Brushstroke I (1993).

With these works the artist transforms into Statics what is normally Dynamic, in Durable what, by its nature, is Ephemeral; crystallizing with metal what, in truth, would be only a gesture.

Continuing the perimeter of the building, we arrive at a crossroads where another icon of Pop Art is shown, one of the thirty-seven specimens scattered around the world of the Love sculpture by the American Robert Indiana (a work that was always done in 1993): capital letters, arranged in a square with the inclined letter “O”. Difficult to pass by without giving in to the temptation of a photograph.

Arriving here there is no longer even need to walk… the works follow one another in succession. We begin with the conceptual research by Giulio Paolini (here we can see four works) Caleidoscopio, Meridiana and Hierapolis, all realized in 1993, to which is added the design of the Astronomical Clock and continues with I Passi (1994) by Luciano Fabro, sculptor and poet, great exponent of Arte Povera.

Afterwards another Italian, and still Arte Povera: Nail and Marble by the Cuneo-born Giuseppe Penone, a well-known artist in Japan so much that in 2014 he was awarded the prestigious Imperial Prize for sculpture.

His research is a scrupulous investigation of interactions, including sensory ones, between the human body and the external environment.

In the water there are the Pleaides, a westernized hybrid reflection in marble of the geometries and poetics of a Zen garden, by the Japanese Hidetoshi Nagasawa, born in Manchuria in 1940 and forced, at the end of the Second World War, to leave abruptly the places of his early childhood, something that marked his way of making art very deeply. Boats and trips are recurring themes in his production.

He moved to Italy in 1967 (he arrived in Italy after a long bicycle journey that lasted a year and a half, he stopped in Milan because there, after crossing half the world, they stole it and it seemed to him a sign of destiny).

The place has other surprises: Wall Drawing # 772 (1994) by Sol LeWitt, Yunus II (1994) by the Japanese Katsuhito Nishikawa and From one place to another,

From one material to another, Passages in and out of work in situ, Shinjuku-Tokyo (1993-1994) by Daniel Buren.

The walk is over, so, like the Great Poet, we can say: “so we went out to see the stars again”.

But we, luckier than him, can do it even during the day, with Tokyo Stars (1994) by Gilberto Zorio, a work that is waiting for us right there, on the sidewalk. 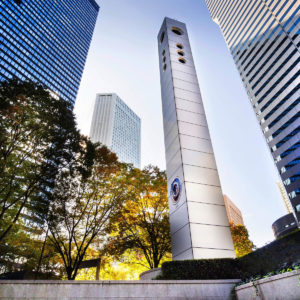 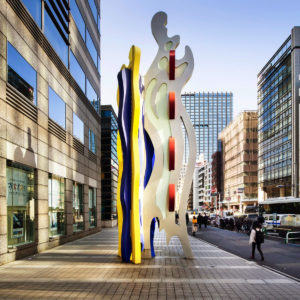 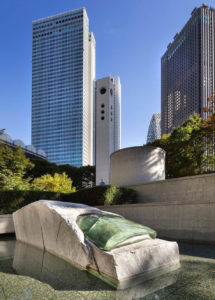 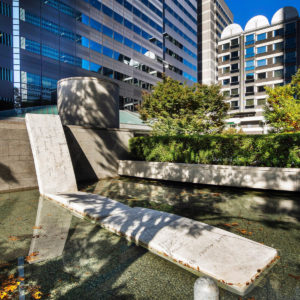 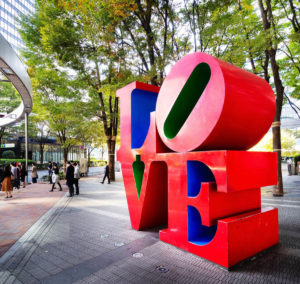