Welcome to the future … That is already pass...

Welcome to the future … That is already passed

Rebecca Agnes is a self-confident woman, with interesting ideas to transpose in the art she realizes and with an enviable look. In her presence the characters of Sailor Moon would appear as inconsistent ladies without taste, other than manga cool!

The exhibition Welcome to the future, on display at the Galleria Inaudita Fusion Art Gallery in Turin until April 6, 2019, just opened, touches on some issues particularly felt at the moment, but interpreted and represented in an original and intelligent way. With the work LOLCAT / WELCOME TO THE FUTURE – BAD PAINTINGS, Rebecca realizes 39 acrylic canvases depicting as many messages that lead the viewer not only to clash with the dichotomy between telematic modernity and content, but also to confront a classical technique such as painting, used here as a medium to express an absolutely futuristic concept instead. The clever questions of the series chase each other in the paintings on display, inducing the spectator, attracted by colors and shades, to respond to them. DOES FACEBOOK KNOW MY FRIENDS BETTER THAN ME? DOES GOOGLE REMEMBER (ME)? DOES SPOTIFY REALLY SUGGEST ME THE MUSIC I LIKE? HOW TO KNOW WHAT IS COOL WITHOUT INSTAGRAM? IN SECOND LIFE YOU CAN HAVE A BIG ASS BUT NOT SMALL TITS. These are simple questions that lead us to reflect on the fact that social networks have taken possession of our lives, but it is not said that life is so rich in its basic meaning. Often on the contrary, the social network is the tool we use to express ourselves, even when we have nothing to represent or want to escape from what we have. We are also at the mercy of social networks as they, with their automation and with their musical, toponomastic, aesthetic suggestions, mark the way, showing us what we are in this contemporary society so interconnected. Are we really?

In her works there is what has already been predicted in Jonathan Safran Foer’s book “Here I am”: a virtual reality that sometimes surpasses the real one, Second Life, in this painting, is her most intuitive iconography. A virtual reality where, as happens with the two characters in the book, father and son who meet and discuss, instead of meeting physically and looking each other in the eyes. A little bit of what happens every day when you are messaging with whatsapp from one room to another. The complete dematerialization of the body, the ideas that travel via pixels, the absolute lack of human contact, perhaps even of content. Rebecca’s works of Rebecca are therefore closely linked to the word, the messages appear everywhere, in the three languages ​​dear to the artist (English, German and Italian) crowning her thought, taking inspiration from the theme of the work and introducing new concepts. For example, in the work “Am I my internal organs?” The artist wonders about the fact that only the internal organs of a body can build the identity of the same or whether the identity, therefore also of gender, derives from feeling of the body, from what the body feels to express, independently of the biological sense of the same. This reflection leads the viewer to observe a series of different organs, designed in an absolutely varied manner by Rebecca’s friends at her request. The artist completes the work by then performing an embroidery on the contours of the same, aimed at tracing and highlighting the different shapes. The use of embroidery technique, dear to Agnes since the beginning, represents the attempt already repeated with the work LOLCAT / WELCOME TO THE FUTURE – BAD PAINTINGS, to use a classical technique to express a strongly innovative concept.

A beautiful exhibition “unheard”, that of Rebecca, interactive but at the same time reflective and profound, able to make us quickly interrogate and move our brain cells, following the original paths marked by her, both in her drawings and in her key phrases.

Welcome to the future, but attentive, at the speed with which the future evolves, the future has already passed! 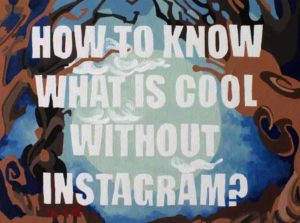 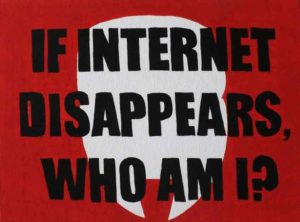 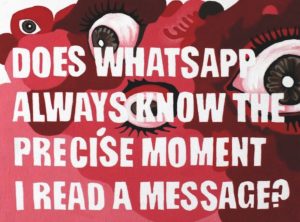