A great loss for the world of art: goodbye to Dona...

A great loss for the world of art: goodbye to Donald Baechler

On April 4, 2022 at the age of sixty-five, the American artist Donald Baechler passed away, because of a heart attack. The news was announced by the New York Gallery Cheim & Read. The artist took his first steps in 1980s New York after spending a study period in Frankfurt in Germany attracted by young German artists. At that point he came into contact with Tony Shafrazi and was sucked into New York when it was made up of clubs frequented by artists and musicians. It was the beginning of the East Village art scene. The spaces were cheap if not free, art was enriched with new talents. From that moment his work begun to be assimilated to that of Keith Haring and Kenny Scharf who like him exhibited at Shafrazi. But he always considered himself distant from them, defining himself as an abstract artist in order to reiterate how his attention was directed, above all, to formal issues, not so much to politics or other types of narration.

So he said in an interview in 2012 looking back on his beginnings: “I think what I said originally was Sometimes I think I should call myself an abstract artist or something like that, in an interview dating back to the 1980’s, and that statement has followed me around every since.  It was initially said in an effort to promote a reading of my work on formal terms, rather than as a proto-pop narrative. This was partly a reaction to the context my work first appeared in, at the Shafrazi Gallery in 1981, where Keith Haring and Kenny Scharf were busy inventing new narratives for Urban Youth, and I wanted to differentiate myself from their projects. I still get called a former graffiti artist sometimes, even after all these years! It amazes me. Obviously I am not an abstract artist. My work is a kind of extended romance with various species of images”.

Regarding his way of making art, there are many movements with which he has been associated: Neo-expressionism with reference to Basquiat, Graffiti Art or Art Brut for the childish trait and the interest in the drawings of the insane. In reality, Donald Baechler’s work is difficult to categorize, it is influenced by Warhol, Roy Lichtenstein, but also by Judd and Andre regarding the serial aspect found in his works, repetition with minimal variations. He was the protagonist of that reaction to Conceptual Art that pervaded America and Europe, of the return to painting that characterized the 1980s. But Baechler has never forgotten even the lesson of the great masters of the past regarding the classical setting visible in the close relationship between figure and background and Giotto’s communicative strength, as he himself explained: “I love Giotto. I used to say that my two big artistic influences were Giotto and comic books!”

He spoke of love for Italy several times, as when he talked about the important meeting with Lucio Amelio: “My first visit to Naples was in 1980, and completely unplanned. I was spending a couple of weeks in Rome, and I had just met Cy Twombly, and while I was in his studio the legendary Lucio Amelio appeared. Lucio said he remembered seeing me while I was on duty at the guard desk at Walter De Maria’s New York Earth Room, where we had had the briefest of conversations a few months previous, and so I was invited to join Lucio and Cy for a spontaneous weekend in Naples”.

And then he continued recalling the 1989 exhibition in Naples: “About ten years after my visit to Lucio Amelio in Naples, he invited me to do a painting show in his gallery in 1989.  Philip Taaffe was living in Napoli then, in a spectacular crumbling palazzo right on the bay, on Via Posillipo. He offered me the use of a huge empty room in an annex. The exhibition included works from 1988 and 1989, and I painted more than half of my show in Philip’s house, and in a smaller studio Lucio had arranged for me previously. I painted my first Black Flowers painting in Napoli in 1988.  And I painted a gigantic canvas diptych called Conversazione in 1989, right in the empty gallery between shows, when I realized we still needed one very large painting. Conversazione features a man in a top hat surrounded by beachballs, and it’s been reproduced quite a lot.  Lot’s of people have told me that’s their favorite Baechler painting. When Lucio died, several years later, in 1994, I have to say that some of the magic went out of Napoli for me. My Naples experiences had almost always featured a narration by Lucio Amelio, in his distinctive hybrid Italo-German accent, and it took me a few years to see beyond his absence”.

Baechler had several collaborations in Italy with Gian Enzo Sperone in Rome, the Cardi Gallery in Milan, the Raffaelli Art Studio in Trento. But Baechler was an artist who also looked to the future by promoting both in America and in Italy young artists linked to his work. About that we mention the exhibition Spaghetti and Beachballs at Studio d’Arte Raffaelli in Trento which brought together in the gallery his young assistants-learners: Brian Belott, Brendan Cass, James Benjamin Franklin, Taylor McKimens.

Baechler imparted to us the importance of the line for its synthetic and expressive force, capable of filtering and organizing the multiple visual information that the contemporary world transmits to everyone. Flowers, ice cream cones, soccer balls, skulls, money bags stand out against complex backgrounds in which other images proliferate to enclose in his works “the tiny usable percentage” of the world.

Baechler was capable of giving life to images that arise from other images from which we are surrounded by playing on a dialogue between two dimensions: the communicative strength of the sign and the complexity of the background. Corners of the world such as public toilets, streets, bars, psychiatric hospitals are transformed into sources of information and archives to draw from. It is the proliferation of life that enters through the unconscious, arousing associations and references. Accumulation and synthesis represent the two extremes on which the artist constructed a balance game between the image-pictogram reduced to essential graphics and the collage that mixes and takes, contaminating the most disparate sources beyond geographical and cultural borders. 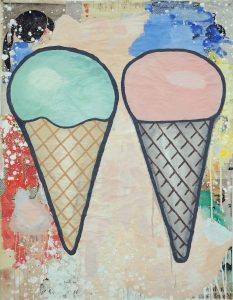 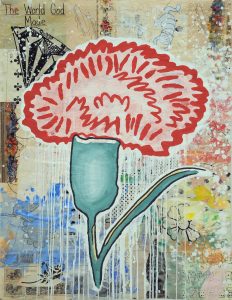 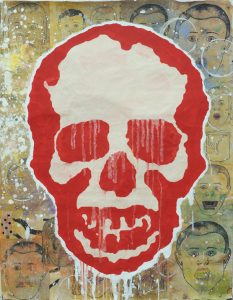