A great loss for the world of ..

The Karuizawa Museum of Art (a beautiful town located at the foot of Mount Asama, born as a post office on the ancient Nakasendo road that connected Kyoto to Edo, in the south-central area of ​​Nagano Prefecture about an hour and a half by train from Tokyo) presented “An Introspective”, the first solo exhibition on a large scale in Japan by the Filipino artist Ronald Ventura. Over one hundred and twenty works exhibited: from sculptures and paintings over three meters high to small and extravagant “gems”.

The current structure of the Museum, initially designed in 2007 as a commercial space, underwent, by the architect Rikuo Nishimori, a substantial makeover that transformed it into a space completely covered with glass, with white pillars reminiscent of a larch forest to better blend in with the surrounding landscape.

The mission of the Kairuizawa New Art Museum is above all focused on the reformulation of Japanese contemporary art, first and foremost that from the postwar period, in a global and multimedia conversation (between history and avant-garde) with international artistic tradition and innovation.

In this frame, Ronald Ventura, a leading figure in contemporary art of Southeast Asia, fits perfectly, with his idiosyncratic style, with his richly imaginative compositions that mix, in a metaphor of the multiform national identity of Philippines, through symbols and icons of pop culture and surrealism, characteristic elements of colonial cultures (Spain, Japan, United States) with elements of indigenous animistic folklore and divine figures from Greek mythology.

A chaotic and disordered world that mirrors the complexity of Filipino culture in a mirror and direct way.

As the artist himself says: I am interested in what is created by freeing my mind from the meaning of the original image and merging it with other elements to interact with each other, that is what betrays the primary meaning of the image and creates a new one … These patterns of combinations are infinite and I have not yet seen the completion of this work.

“An Introspective” unfolds through a prologue and six exhibition floors. The prologue is represented by a set of works in Hahnemühle FineArt, fiberglass and polystone, a real playroom where Spongebob, Bart Simpson and a bulldog are harnessed and recruited into the artist’s meta-pop world together with curious human-animal hybrids enveloped in geometric cocoons. As a kind of omen of the extraordinary things shown in the following “rooms”.

The first room is called “Black Star series with a Boat” and is a geometric dance that fills a void. The pieces of the series in concrete, fiberglass, resin, metal, acrylic and LED occupy the field in a menacing way: a “magical black” made of wings and claws (and claws form upside-down stars). An atmosphere of anxiety barely balanced by the meditative state of the “Boat”, a ship that sails the sea and aims for the stars, mobile in thought but still motionless in reality.

Room number two is dominated by the work “From the melting bears to the unicorn horns”. Pure Pop: where emoticons and emojis usurp the role of words. Omnipresent and universal (basic forms and simple symbols) have translated the rock drawings of the Ancestors into the plump yellow heads of the Great-grandchildren. And here, then, works with no place for the transitory or the nuanced, made with rigid and not at all blurry boundaries, in which the figures of Japanese Pop from Anime change into “Humanime”, becoming amusing and, at the same time, oracular Art.

The third space hosts “Spectacular works epitomizing the world” and is occupied by the large canvases. Although Ronald Ventura prefers sculpture and conceptual interactions, he is also an excellent painter with exquisite technical ability. Four untitled oils on canvas give us a vision of the world full of madness, magic and magnificence.

One in particular, entirely crossed by the word PARADISE, written with the characters of the carnival but with ambiguous colors that do not unquestionably affirm joy and happiness, means that this is how people are, full of desire to bring the party everywhere but also always burdened by stories and chapters of life that are not always positive. The colors of their life (but also ours): life spent between viral panic and digital panacea.

“Danger Zone” is the fourth stop. All in yellow and black, the colors of the quarantine. Signs of caution and restrictions that warn users: Beware! There is a danger in the air, invisible and invasive.

And here, then, that in the fifth exhibition space, with “Homage to classical art and dead ends”, hell breaks loose. Neoclassical paintings surrounded by sculptures of bones, clouds, balloons, televisions, heads and bodies impaled in an amalgam (zoomanity) of bestiality and illogical inhumanity. Last stop before nowhere.

In the end, the sixth area awaits us, the “Diagnosis Room” where spectators can look at what must be considered notes, notes to help understand the world: small graphite works, inserted in the white of an immaculate room, which they can help a path of understanding and transcendence.

Looking back and looking forward at the same time, studying and observing yourself and your behavior to change thoughts and actions. In an introspective way, as Ventura does in this exhibition where he offers a bird’s eye view of his journey through Art and Life. Not a retrospective of works by now “dead” but rather alive and in constant evolution. In an evolutionary movement that does not know its point of arrival.

And this point of arrival no one knows, not even the artist himself. Only tomorrow will dictate his breathtaking beauty or his stormy terror. 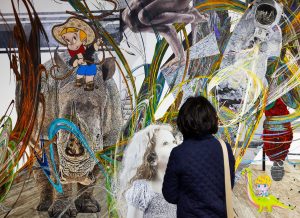 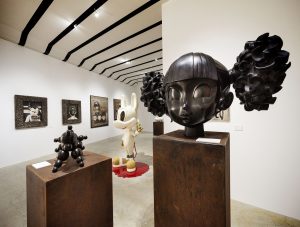 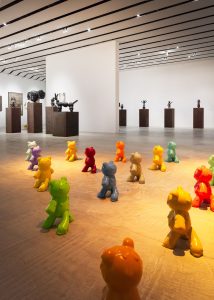 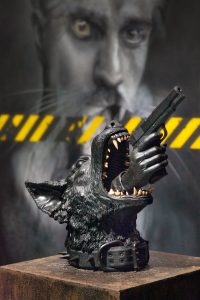