Refined, bibliophile and cultured: these are the aspects that transpire from the artworks by Giulia Marchi (1976, Rimini), artist who presents a distinctive aesthetic experience as an act of balance that verges on the conceptual; practices characterized by a literary substratum and accompanied by an investigation into the physical and mnemonic characteristics of materials. A plastic vocabulary, in other words, that finds its raison d’etre in the love for writing and paper materials, elements that, combined, reveal the artist’s omnivorous knowledge, motivated by her indefatigable spirit of humanistic research. Such an inedited investigation is well summarized in the solo exhibition Una pietra sopra (A stone above), at Matèria gallery, in Rome, from February 19th to May 7th, 2022, followed by a critical text by Andrea Cortellessa. What is impressive is how all the aforementioned arteries of analysis are channeled towards an exhibition with a beating heart, distinguished by a disguised artistic mastery that is always concealed by a superfine elegance. In this regard, it merges the statement Ars est celarem artem[1], according to which the skill of an artist, such as that undoubtedly attributable to Marchi, lies in finding a calm balance between expressive grace and vigorous content.

The exhibition in its totality appears as an accurate interlocution conceived far from the exhibition formats, sometimes aimed at satisfying a mere desire of entertainment; on the contrary, Marchi’s artistic project is treated with a critical and philological cut of sure thickness: hence the measured fineness and the accurate attention to details, the results conceived during a year of common work and constant dialogue between the gallerist Nicolò Fano and the artist, always supported by the Gallery Manager Rossana Esposito. The exhibition is a successful spill over of the artist’s research, whose unpublished works were created from objects taken from her own archive material. The retrospective induces, with a luminous clarity equal to the visual suggestion, an imaginative reading of a synchronic tale of a double creative page, capable of linking the past to the present, permeated by a yearning for love towards the physical denuding of the materials used. Thus, by maintaining this approach, a spurious and rebellious genre emerges in relation to any artistic codification, capable, as Marchi is, of uniting manual skill, at times programmatic, with a clear and concrete reasoning towards the history of each object incorporated in the sculptures, the result of an intense and successful mental laboriousness characterized by an imaginative dexterity and naturalness. This artistic connection attracts the viewer’s interest, fascinated, it is clear, by the formal details of the works: such as, for example, the 30-gram Chinese Xuan paper (used more than 1500 years ago in Imperial China to transcribe laws), up to certain evaluations of content, such as choosing quotations from the philosopher Plato to the writer Emilio Villa as the titles of her works. At this point, it is not too absurd to think that Marchi’s approach to design is characterized by a purely visual[2] approach, since the works reveal a deeper existence than that which we are allowed to discover with our senses. Proof of this is the work composed of Xuan sheets, which conceals a pencil transcription that recalls the title, Quaranta righe più due metri cubi d’aria (Forty lines plus two cubic meters of air), composed of an apparently invisible writing that is only perceptible if we press lightly on the sheets.

Following the interesting exhibition’s itinerary, it is necessary to mention the particular sculpture that touches the gallery space according to an amiable equilibrium: the flexuous tongue in corten steel, that visually binds itself to the firm sphere in white Carrara marble, places itself as an unprecedented spatial paralogismsince the two elements, still not touching each other, reveal a virtual and vibrant tension. It is precisely this last personal feature that is a constant in all the works: Marchi reveals her ability, with unequivocal shrewdness, of ceaselessly investigating the particular tractions that can be established between the various spatial elements of the gallery, thus conceiving works as acts of an indoor environmental art. Thus, the artist marks a new perceptive dilation of Matèria, mitigating its particular funnel-shaped conformation and making it take on imaginative new forms. In particular, in the work L’infallibilità è rigorosamente monocroma (Infallibility is rigorously monochrome), the unity of the central pillar of the gallery is found in the form of a transparent column containing balls of wool with golden reflections, so that the spatial arrangement becomes the end for the creation, while the sculpture is the means: architecture and sculptural art complete each other in a homogeneity of species, and the specific spatial zones change to dominate the work, the result of a work conceived from the basic material.

Another interesting element of the retrospective is the constant and heterogeneous use of paper that confronts the formal aspect of the artist, so much for that it reminds us of the interesting and significant reflection of Ettore Sottsass on the architectural conception of the wall – which is the same approach as Marchi’s – according to which «walls can be white and open pages, they can be read with stories of a past and ancient multitude»[3].  With this description firmly in mind, it is possible to understand how the two sculptures composed of stacks of paper, in a continuous module of 60 grams arranged on wire structures in iron, appear as “walls” with an antithetical character. Here, then, is an iron cage that holds reams of paper, while the other is an iron rod that holds, according to an apparatus regulated by a calibrated system of balancing acts, a fluttering sheet marked with graphemes, so that grammar becomes a living form and a transmitter of emotions. Everything is played out in a dual monochrome that reveals the most sensual aspect of paper, so that distances, weights, intervals, measurements and weights all become fundamental elements for the success of both artworks.

On the other hand, the archive objects, which have lived with the artist since she was a child, appear in the minimal sculptures, elegantly arranged on exhibition shelves, they are the results of a study driven by the desire to create strange balances characterized by a magical link with surreal hints and revealing a micro-order that announces itself hierarchically linked to an even greater order. If these sculptures are to be seen as examples of a natural equilibrium in which everything is linked, we can evoke Galileo Galilei’s thought that “you cannot pick a flower without disturbing a star”. Thus, in these soft tensions, singular combinations are created, aimed at investigating the ductile and gravitational aspect of materials, demonstrating, at the same time, a reasoning diligently animated by a supreme study of the artist, which is evident both in the delicate acrobatics and in the pencil sketches with a free and automatic cursive. From all this arises, with undoubted certainty, Marchi’s artistic rule, a symptom of an inapparent ornamentation but also of a free, instinctive and cultured research: in other words, we reach an art capable of concealing, with refined ease, itself. 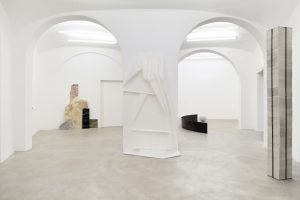 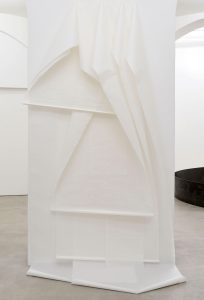 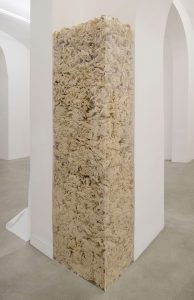 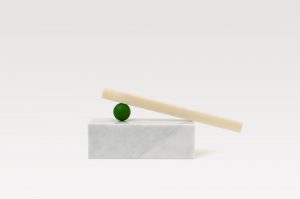