The others. The photography of..

Milan-Turin, solo exhibition of the artist Andrea Barzaghi (Monza, 1988) curated by Stefania Margiacchi, is divided into two places simultaneously: in Turin at Societè Interludio and in Milan at the editorial office of Forme Uniche for the Emporio Centrale project by Giuseppe Amedeo Arnesano. If Milan ideally represents the starting point for pictorial reflection with site-specific works, Turin (which hosts the second part of the exhibition) becomes the arrival station but also the place where thought and work expand. Barzaghi’s expanded painting connects the two cities with the perpetual motion of the bodies.

Ljuba Ciaramella: I would like to start by asking you to tell me about your path, both formative and artistic, which then led to the formulation of your current creative process.
Andrea Barzaghi: My studies began at the Urbino Academy in the painting section; then I spent ten years in Germany, eight in Nuremberg and the last two in Leipzig. This experience was fundamental for my process: I found a freedom that I did not perceive in Urbino, surely it has to do with the fact that I went to Germany in my early twenties; I was fascinated by an energy that I had never experienced before. In Germany I met not only many students, but also professors, among whom I remember in particular Thomas Hartmann, who was fundamental in my artistic development. I felt that there was something important, and it was this feeling that made me decide to stay.

LC: The exhibition Milan-Turin is a project designed and developed in two places and two times, as it opened on April 8, 2021 in Milan at the headquarters of the Forme Uniche editorial office as part of the project Emporio Centrale by Giuseppe Amedeo Arnesano and then in Turin in the spaces of Société Interludio. Where does the need to design an imaginative trajectory between the two cities arise?
AB: It was all very natural: I was involved by the curator Stefania Margiacchi who was in turn invited by Giuseppe Amedeo to be part of the project Emporio Centrale. From there we thought it was possible to create a bridge between two cities, which are very important for Italian contemporary art, and that influenced my artistic work. I moved to Milan two years ago and I have been collaborating with Société Interludio since 2018, so I always went back and forth between Milan and Turin. I also liked the idea of a specific project that expanded in so many directions that were not considered at the beginning. We called the exhibition “andata” in Milan because it was the first and “ritorno” that in Turin, but I think that the two directions are interchangeable.

LC: What are the differences and similarities between these two circular and interconnected exposures?
AB: In Milan it was a site-specific intervention, in line with the cut that Giuseppe wanted to give to his project, designed to dialogue with that of Turin: in both locations these bodily elements return, the arms that represent the link between the two cities. All works in Italy were unpublished, some have defined them as “expanded painting” because it is neither an installation nor a sculpture, but a painting that is amplified in space.

LC: In his critical text, Giuseppe Amedeo Arnesano defines your painting as an image that coincides with a body movement, an “emotional resonance” elaborated by the mind and transferred to the silhouettes. How do the non-verbal gestures of the silhouettes of the bodies represent inner movements?
AB: It’s a direct representation. The arms are a symbol of doing, a means with which we know the world: with our hands we touch, caress, throw our fists and grab. It is a symbol of movement, a tribute to research and not to stand still, to tend towards something, even if you do not know what it is, just do not stagnate. There was a moment in my life when the canvas seemed to me a prison and I was suffering the limit of the four sides: from there I started to add pieces to the canvas and then dilate the matter in space. If the first works created with these additions were pictorial, because I painted on the surface, now the surface is space, the room is my canvas. Instead of breaking through the sides of the painting I entered; the work is composed of elements created to change depending on the space and my needs.

LC: The body is central to your work and is often represented in the form of fragments or silhouettes. What is the definition you would give of your bodies and why exactly that way of representing them within the narrative you create?
AB: The body is a strange thing, because first of all it is our means of perceiving reality. Both the body and the pictorial surface are form, but like all forms they are carriers of content. I don’t see the body just as a means, because it changes according to what I feel, consequently even what I paint changes. Over time I have noticed a change in the bodies I represent, because nothing is static, I would be almost afraid to see the body not change.

LC: What are your artistic and theoretical references?
AB: Like all references also mine changes over time, but my great love has always been Matthew Barney, even if he is not a painter has influenced my practice a lot. Also the Swedish artist Mamma Andersson and her husband, Jockum Nordström. I was very impressed by Anne Imhof’s work at the Venice Biennale. Often the works of other artists strike me as epiphanies, many small details that come together. As for the theoretical references I remember The concrete paintings of Kandinskij by Alexandre Kojève: his painting is concrete because he creates worlds through the abstraction of reality, opening a discourse on what representation is and therefore the contents and forms of images. At this moment I am reminded of the song by Blu Vertigo (Altre F.D.V.) where in the text they say: “If there were no flowers, could you imagine them? If there were no fish, could you imagine?” Kandinsky’s abstract painting is like this; if you can imagine it, it exists somewhere. With this perspective the debate between natural and artificial always returns, because what you create artificial always has a natural basis.

LC: Finally, what are your considerations following this double exhibition project, given its particularities?
AB: I was struck by the fact that the exhibition was called brave. It was interesting, it gave me some thought, because I had not perceived these works as brave.I was also pleased that several painters came to see it and appreciated it. My works worked both in Milan and in Turin: Milan was site specific and Turin was an adaptation in a not properly artistic environment, even if it has to do with art. I would like my art to reach even those who are not in the field. You have to take risks, be on the move, like your arms. 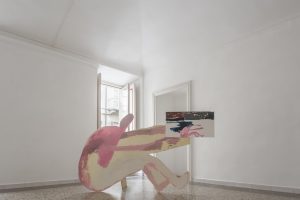 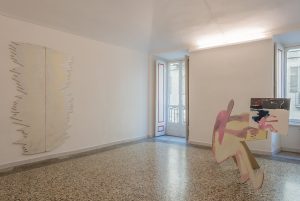 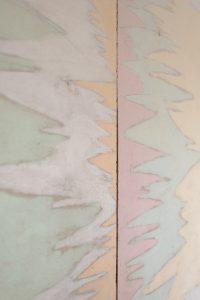 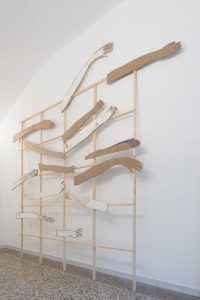