On the occasion of the 17th International Architecture Biennale taking place in Venice titled “How will we live together”, the Swiss artist Not Vital returns to the lagoon with a new project focused on his renowned series “House to Watch the Sunset”.  The exhibition, hosted since the 21st of May in the Palladian Abbey on the island of San Giorgio Maggiore, is part of a wide program of collateral events organized to accompany the Biennale, and located in different areas of the city. The solo exhibition has been curated and promoted by Benediciti Claustra Onlus Foundation, which has been engaged since 2013 in the promotion and enhancement of historical and contemporary cultural heritage.

Throughout the course of last decades Not Vital, born 1948, has distinguished himself in the international art scene for his nomadism and his passion for anthropology which, for about fifty years, have led him to an incessant exploration of remote places, distant cultures and craft traditions. Taking inspiration from civilizations and without forgetting his roots, the artist develops a multifaceted language of forms in which abstract and figurative combine to a create suggestive atmosphere, causing to the observe a deep sense of bewilderment.

During this continuous wandering from France to Chile, from Amazonia to Indonesia, to the Sahara’s desert, Not Vital oversteps every border and breaks through the barriers of the typical museum space, taking his artworks to remote, and sometimes unreachable regions. Thanks to careful study of the materials and the innervation of local manufacturers, the artworks immerse themselves completely in the surrounding environment, becoming part of it.

Not Vital’s interest in the perception of space, where and how we live, has become over time a real obsession, which has translated in 2005 in the realization of a global scale project, still in progress: “House to Watch the Sunset”.

Born from the artist quest to be able to blend sculpture and architecture to create something new, the project involves the creation of five installations, one for each continent, in the shape of towers. His works, all made site-specific with the collaboration of local craftsmen, are approximately thirteen meters high, scattered over three floors and exclusively accessible by a door and dedicated external stairs. Each floor is equipped with a simple rectangular window, missing the glass which allow you to look out and admire the world.

Although both shape and structure remain unvaried, every “House to Watch the Sunset” is built with different materials that reflect the local culture in which they are found; made with a mixture of mud, straw and dung from Nigeria, with angelim Vermelho – a tropical wood from the Brazilin Amazon jungle and concrete and sand from the rivers in Switzerland.

While the architectural aspect the “House to Watch the Sunset” are not designed to be inhabited, missing water or electricity, on the contrary, they perform as a purely evocative and transcendental function, such as the contemplation of the sunset. In fact, for Not Vital “When you build a house to watch the sunset, then you have a purpose. Living there is secondary. You wake up and take water from the well and go behind a tree to pee and it’s very nice. There is no waste and what you have you give back to the plants. Which I discovered to be a luxury.”

To define this particular ambivalent, hybrid nature, which distinguishes “House to Watch the Sunset”, Not Vital coined the term SCARCH in 2009, a neologism born from the fusion of the words “architecture” and “sculpture”.

It is the fifth last and monumental interaction of “House to Watch the Sunset” to be at the center of the SCARCH exhibition, in the Abbazia of San Giorgio Maggiore. In agreement with the Benedictine monks, the installation, made of aluminum by Italian’s craftsmen, was placed at the bottom of the main nave, facing east, where the churches traditionally face. After the conclusion of the Biennale, the tower will be moved to the Island of Fangasito in the South Pacific, where it will be able to withstand the strong winds of the Tonga archipelago thanks to its particular structure.

Because of its slightly reflective surface, the tower fits seamlessly into the Renaissance architecture, testifying the possible coexistence of the past and present. This is the same purpose of the Foundation, which aims to awake the sensitivity of the visitors promoting a dialogue on the greater inclusiveness and openness of the churches until now used exclusively for the liturgy. To this end, the exhibition includes six other works which, located in different spaces, allow the viewer to explore the abbey. Passing through the adjacent corridor from a side chapel, through the presbytery and choir, finally entering the sacristy. The works on display, unlike “House to Watch the Sunset”, are small in size and range from painting to sculpture, to neon, highlighting the artist’s ever-evolving material versatility. 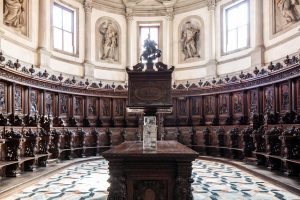 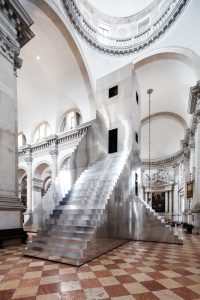 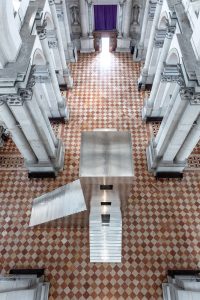