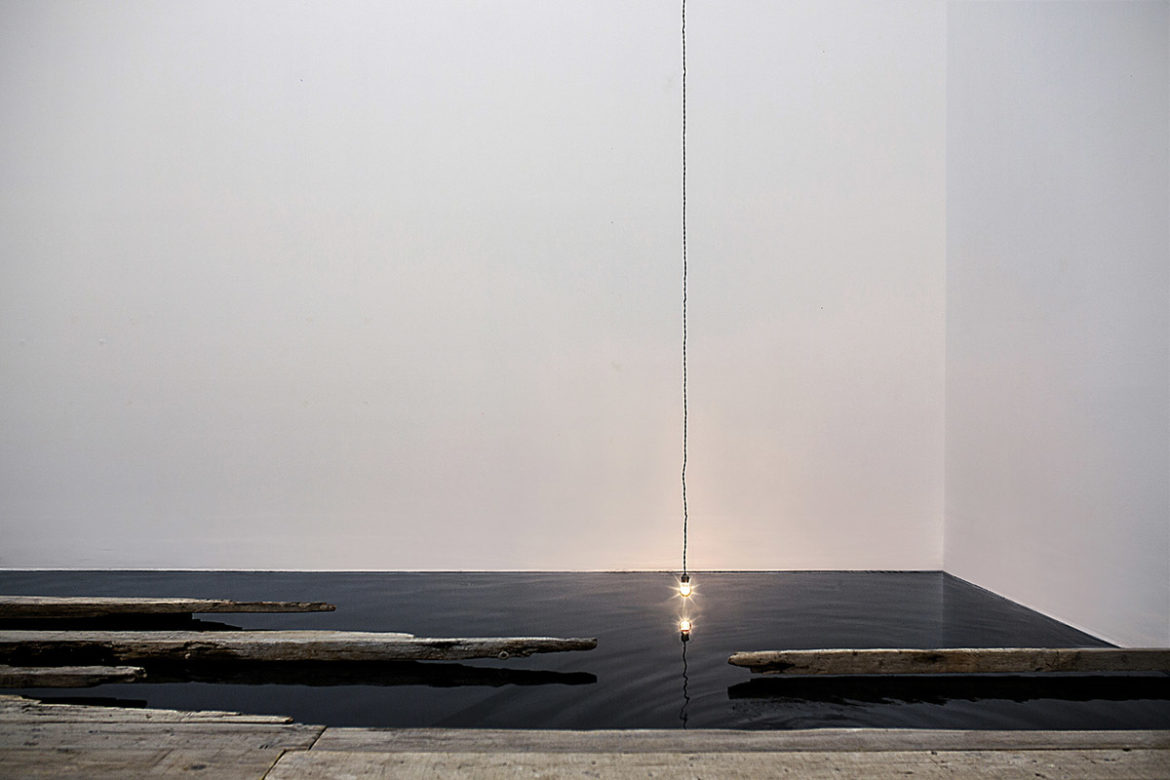 At the foot of the charming mother Etna, whose eruptions have always given a particular charm, overwhelmed by the disastrous eruption of Etna in 1669 and the subsequent earthquake of 1693, the city was almost entirely rebuilt at the beginning of the eighteenth century, Catania, splendid A city of art, overlooking the Ionian Sea, it remains an undisputed example of Sicilian Baroque and for this Unesco heritage together with the other towns of the Val di Noto.

In the itinerary suggested to any tourist, the history of the city is enriched by the myths and legends that populate the tradition of Catania and distinguish its cultural heritage since its inception.
Around this Andrea Santarlasci, Pisan artist, class ’64, decided to create his story, and return it to the Catania area, thanks to an intervention currently ongoing at the contemporary art gallery collicaligreggi, the latter always looking for innovations and trends at the pace of the most advanced contemporary art.
Santarlasci, who attended the Academy of Fine Arts in Venice and Carrara, immediately decided to tackle controversial issues, but able with a careful reading key to reveal poetic that from the late 80s to today have moved Italian art.

Often the relationships and the oppositions that present themselves in the same intervention lead the spectator as well as to inquire into questions that are capable of being solved only through a sensitive and never too banal soul.

Nature that dialogues with man’s artifice. A space that is a place that becomes almost enveloped in which the visitor is amalgamating giving life to a very personal experience.
Feelings of disorientation, restlessness, amazement that can only lead to discovery … whatever it is!
The exhibition inside the gallery collicaligreggi, entitled Lacrimae, and curated by Lorand Hegyi, is married to the chosen place, Catania, a city as previously mentioned in myths and legends, like that of Aci and Galatea, legend that tells of the great love that joined Aci to Galatea, a beautiful sea-nymph with a milk-colored skin very dear to the gods, love, however, annoyed by the jealousy of the monstrous giant Polyphemus with only one eye on his forehead, who after the refusal of Galatea threw on Aci’s body a gigantic boulder that crushed him. Upon hearing the news, Galatea goes to where the body of Aci was and at the sight of his love threw herself at him, weeping all the tears she had in her body, endless tears that aroused so much compassion towards the gods that to mitigate her pain by transforming Aci in a beautiful river that descends from Etna and flows into the stretch of beach where the two lovers used to meet.

Andrea Santarlasci declares: “… The project comes from a reflection on the place. From the city of Catania came the idea to address and interpret the themes and suggestions that are interwoven with its territory, history and legends concerning the underground rivers, real and mythical, invisible, legendary, obscure or disappeared waters, that often become metaphorical resonances and lead us to reflect and meditate on universal and existential questions of man, such as pain and death. Opposing values ​​such as immobility and flow, simultaneously caught in a simultaneous presence, will be further themes addressed through the substance of water that becomes, at the same time, a metaphor of death and life “. 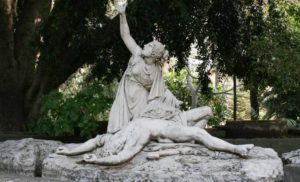 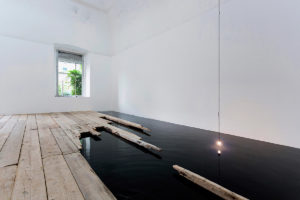 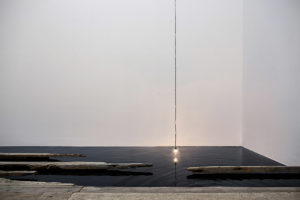 An enormous installation, therefore, site specific entitled Sotto di noi, immobile flowing time, 2018, consisting of a large eroded wooden floor that runs through the entire perimeter of the gallery, where a break, a ruin, a chasm, a vacuum opens up which emerges the deep and dark water of a possible underground river. Like the re-emergence of something hidden and invisible, or the materialization of memory and imagination.

As the artist declares: “From the light falls enigmatically a light, almost to signal the point of emergence of the waters that emerge from the subsoil slightly rippled by a slight current, but at the same time immobile and circumscribed in the perimeter of the gallery, almost evoking the enclosed waters of Gaston Bachelard ‘The closed water takes death in its bosom. Water makes elementary death. Water dies with death in its substance. Water then becomes a substantial nothing. You can not go beyond in despair. For some souls, water is the matter of despair ‘”.

The huge installation will be accompanied by some paintings, hanging on the wall, designed and created by the artist for this exhibition; works in which appear words that are related to the story around which the artist’s work revolves.

So the intervention of Santarlasci gives the city not only a new art, daring and daring at the same time, but also a trace of the past, which for a city like Catania, rich in myths and legends, is a charming reminder of what It was certainly or to what has been handed down and around which revolve stories and anecdotes from a thousand contours.