Tigers in Flip-Flops at Massim..

Ann Hirsch‘s irreverent artistic research of  (1985, Baltimore, lives and works in Los Angeles) explores the role played by women in online space and the tacit conventions that constrain the expression of female sexuality. Grown in a very conservative family, she discovered the world of AOL chatrooms very young, that, at the end of academic studies, inspired her intense media performances. One of her first projects was the creation of the You Tube Scandalicious channel, in which the artist interpreted the role of a Hipster performing in provocative and ironic dances in front of the webcam, stirring up the often disrespectful followers. Fascinated by the way TV reinforces easy stereotypes of genres usually associated with young women, in 2009 she participates in an American reality show by shaking from within its dynamics to stigmatize the negative ideals underlying the success of self-representation standards which sacrify the identity of the person in the name of a coveted and ephemeral media fame. By offering her body and image in ambiguous and uncomfortable situations, Hirsch investigates the influence of technology on sexuality and gender issues by signaling contradictions and complexities of the female condition in the new media.

Submarine Society, the first solo show in Italy of the artist and a new disturbing chapter in her catalog of morbidity and contemporary mania, is a dive in apnea in the depths of the individual and collective unconscious, conceived as a border region where removed dreams, unmentionable desires and small daily perversions lie. The title of the exhibition is inspired by the well – known Freudian analogy: “The mind is like an iceberg, floating with a seventh of its mass above the water” and Iceberg is the recurring motif of a graphic series with which the artist explores and bare her own more intimate fantasies. The design automatism creates a surreal gallery of naked characters engaged in illogical occupations with the aid or under the supervision of the most improbable objects, abandoned in the same cerebral and amniotic fluid (the inner of the iceberg) that nourishes and envelops the scene. Hirsch’s discontinuous and mocking insistent handwriting seems to please the illogical banality of her unconscious and to attribute mysterious erotic allusions to innocent situations. In this way, a piano solo has as its only spectator a cheerful pig in the lawn, a chess game becomes a practice of fetish domination and a frog feels impassive to the hanging of the princess choked by the lightness of her aspirations. These grotesque narratives scatter private fragility and cruelty to restore them as sense breaks that reveal the simplicity of the most basic human instincts, now inextricably linked to an imaginary genetically modified by the intrusion of rhizomes of drift mainstream culture.

The Icebergs are in fact the hallway of the most controversial core of the exhibition, a room forbidden to people under the age of 18 which hosts the Cuts series videos, born from redrawing red-light films downloaded from the main dedicated websites. For the artist, according to which any form of internet body exposure is pornographic, the hard-core, which is a massive percentage of internet traffic, is the gigantic removal of today’s collective unconscious and is therefore basically ignored by sociological studies and even artistic production. Its global spread, coupled with an equally universal omission of critical consciousness, convinces Hirsch to consider this phenomenon as a privileged observation point for her critical examination of human sexuality and of related behavioral and social issues affecting its cultural codification. Each video is associated with the logo of the reference website, focusing on a specific pornographic category, such as “teen”, “anal”, “milf” or “interracial”, and is derived from the editing of short sequences from various footage on a new audio track created by the artist. The intent is not to disturb or excite the user, but to raise the many levels of meaning that lie in the exasperated and consumerist representation of the obscene to try to understand which foothold it can find in any dissatisfaction and repression that the pursuit of a normal social life implies.

So a video that shows teenage sex is matched to the track I’m on Fire in which Bruce Springsteen (according to the artist a typical American middle-aged male) sings love as possessed while in Titty Fucking a female narrator voice enters into a chaotic flow of consciousness that questions the erotic potential of the mother-woman in the face of hard scenes interpreted by prosperous mature women. In The Unbereable Whiteness of Being, Hirsch’s soliloquy retraces the transcultural stereotype of white color as a symbol of purity, spiritual nobility and pacifism in contrast to overlapping images of voyeuristic slick sexuality, while in Dancers in the Dark you see solitary web dances of amusing housewives divas alone in their ordinary rooms but blindly connected with an outright public of potential anonymous guarders. These abnormal media assemblies put the spectator in tough tests forcing him to look at a growing succession of pre-packaged sexual relationships in a public space such as the gallery, to overcome the embarrassment of openly doing what is usually hidden, to confront his own perversions and perhaps to discover unthinkable monsters very close to him. Mordant, intelligent and painfully sincere, Ann Hirsch continues to have the courage to expose herself in her heterogeneous artistic research with the only shield of an insolence that it would be reductively anesthetized by calling it provocation. 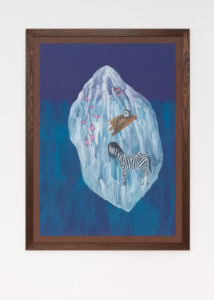 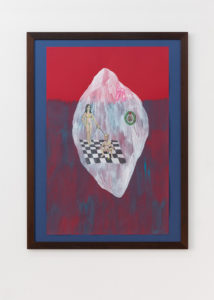