Works for a Cosmic Feeling. Th..

The building that houses the Palais de Tokyo was built for the Universal Exhibition in Paris in 1937. From an architectural point of view, the building is truly impressive, of immense proportions, with high colonnades, and a certain severity overall, but with a fascinating scenic brutalism derived from a deliberately unfinished restoration of the interior spaces and which make it very current and close to the spirit of our times. The contemporary art center was founded in 2000 by Nicolas Bourriaud and Jérome Sans (with assignment concluded in 2006), but it should also be added that, under the different directions that gradually followed, the activity has always continued at great quality and expressiveness.

If it did not sound dangerous, we should speak of a Wagnerian instance that gushes out suddenly and powerful, however, let’s see this instance positively and not for those deleterious aspects that were inappropriately attached to it due to the political disasters of an exalted and warmongering twentieth century. Let us therefore think of the choral nature of the proposal, the plurality of plots, the contrapuntal texture, the rich chromatism, the harmonies, the synthesis of poetic, recitative and visual arts. And we think of all of this as the values ​​of a spectacle that has no equal.

The exhibition path at the Palais de Tokyo therefore invites the visitor to walk the interval between the living and the non-living, between shadow and light, between past and present, between stillness and action, between intensity and disenchantment, and to invent a new perspective of the occupied space. Ultimately it is an uninterrupted song, the one that speaks with the arcane and generates the hidden fragrances: without wanting to be disrespectful I feel like talking about equivalence and correspondence, that is, of forms in alignment, a bit like the planets in harmony of their eye sockets or like the curled up dog that unites the head to the tail.

Anne Imhof (born in 1978 in Giessen, Germany, lives between Berlin and Frankfurt) boasts a very respectable curriculum: we retrace the salient stages. Her first solo show dates back to 2013: “Parade” at the Portikus in Frankfurt; then she arrives at MoMA PS1 (New York, 2015); in 2016 she exhibited at Kunsthalle Basel and Hamburger Banhof (Berlin, 2016); in 2019 she at Tate Modern (London). The author represented Germany at the 57th Venice Biennale in 2017 and on that occasion she won the Golden Lion for best national participation with her performance / installation “Faust” and on that occasion the magazine “Juliet “Dedicated her the cover (n. 183, June 2017). This Parisian stage is, therefore, for the author a further peak reached. 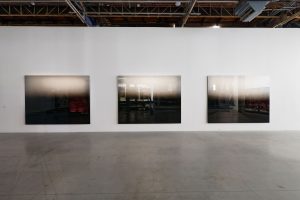 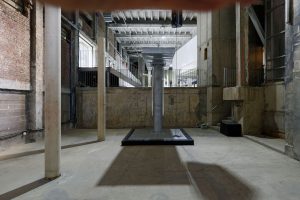 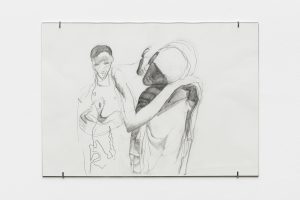 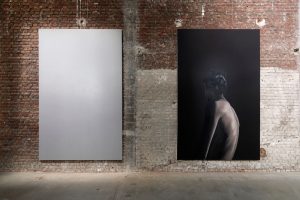