Nostalgia as a shared feeling,..

There are places that are true oases in the desert. Perhaps unsuspected places that have much to tell, but on which too little light still shines. MARCA Museum in Catanzaro is one of these oases: a place devoted to art, which, in line with the territory’s rich cultural and artistic tradition, acts as a polyphonic center of ancient art and of all contemporary expressions. The rooms of the museum will host until March 31, 2022 the exhibition Autarkeia II. The call of matter, signed by the artist Aron Demetz. Curated by Alessandro Romanini, it takes the form of an interesting exhibition project, which dialogues and compares with the museum’s permanent collection.

The artist’s sculptures acquire space in their apparent immobility but are autonomous: space, which is almost nullified, becomes secondary, a mere container. The figures, which are often born from the static nature of blocks of wood, come out of the material, free themselves from the excess and tell the fragility that is inherent in their bodies. Sensations are fixed on the skin of the sculptures and those bodies, so real that they seem to be frozen in a perfect moment, speak and tell, thanks to an extraordinary verisimilitude, that leaves the user breathless and induces an inevitable comparison. Demetz’s works seem to be based on the concept of Autarkeia: although aesthetically beautiful, they do not identify with an aesthetic message or a frill, they are living bodies that exist through their sculptural and therefore material form. The artist, who investigates the processes of transformation of matter, has been able to transport in contemporary art a practice that has ancient origins, translating it, however, in a personal vision that does not want to be reproduction of reality but rather, detection.

Below, the interview with the artist!

Claudia Pansera: Generally and perhaps trivially, I like to start interviews by letting artists freely tell who they are and what background they have. However, with you I would like to start with a direct question, through which I hope you will tell your story: what does it mean to be a contemporary artist?
Aron Demetz: It is an attempt to assign an artist to a defined time. Nowadays a very diluted definition.

CP: Currently, the MARCA Museum in Catanzaro, is hosting your exhibition Autarkeia II. The call of Matter. It’s an interesting title, which already says a lot. Why this choice? What does this exhibition project tell us and how did it come about?
AD: The project was born from a meeting with the president Rocco Guglielmo, which took place already a few years ago. Having made in 2018 an exhibition at the MANN in Naples, we decided to continue the path, with the works that were born mainly after that event. In recent years my research, has paid particular attention to materiality and the involvement of the work process in the work.

CP: I have read and observed myself, at MARCA, that your works are often the result of processes that attack the material. And the material, as in the case of the resin, continues to work autonomously after being applied to the sculpture. The fragility but also the transformation of the material comes into play, which renews itself and is somehow reborn. Are these processes controllable? When, for you, is a work finished?
AD: Each material has different characteristics, memories and stages and the artist tries in his own way, to find a way to exploit them for his art. Clearly everyone feels the material differently, has different origins or makes momentary decisions for each work, which at some point finds a form that can work at the moment. But perhaps it’s never finished, because it’s only an instantaneous moment in a quest that continues.

CP: Observing your works, it is clear that despite the multiplicity of techniques and materials, there is a red thread that binds them. I’m referring not only to the recognizability that they possess and that leads them back to your signature, but also to what they transmit. Sensations and silences, hieratic glances that nevertheless speak and seem to possess identities. What can you tell us about them?
AD: Certainly it is related to the vehicle of transport that I use and that is the figure. Staying in the shape of the trunk clearly reduces the movement, but as the tree grows all its life in the same place also the figures are static and still. On the other hand they represent man, without gestures, symbols or narrations, and the focus is posted in other.

CP: You have collected an important heredity, which clearly reveals the making of art, understood as a gesture but also as work, which also fully involves your physicality. Are the creative processes you implement something similar to performance?
AD: The processes definitely, but the sculptor decides to stop a material in a form, so I’m not interested in the process itself, but what’s left and the decisions I make to keep one of these parts of the origin visual.

CP: No one would argue that your works are simply “pieces of craftsmanship” but the manufacturing component is strong, and it is clearly what defines your research. To the question that follows many might think the answer is simple: technique. But I believe that it is not just about technique. So I ask you, is plastic processing somehow bent to the structural conditions of matter? If so, do you manage to contain or circumvent them?
AD: Technique, which has always been important, has lost some of its value in recent decades. Certainly important visual elements or modes have taken over, but I don’t believe that a technique should be repudiated in principle. Surely by itself it cannot survive, but used in an appropriate way it can help the work, as it has always been. Clearly what carries art is the idea and concept of the work, but as the strong examples of contemporary works show us, it is the interaction of all the elements that create a good piece.

CP: For each of us, “home” means roots but also understanding and knowledge of ourselves and of things that may seem hidden but that belong to us. You come from Val Gardena, this link is already partly evident in your artistic expression but I would like you to tell us how and if your roots reflect on your practice and how they have influenced the developement of your poetics.
AD: I don’t think there’s any need to deny where you came from, you can’t escape that anyway, the important thing is to find a convincing way to communicate with it in the present.

CP: I would like to conclude our interview by asking you if there is a relationship of reciprocity, or perhaps symbiosis, with your works. Let me explain: do you live, speak and express yourself through your works?
AD: They are more sculptural decisions that pass from one work to another, enriching and modifying each time. But sculpture is a translation. 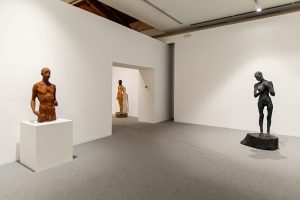 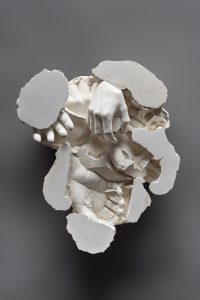 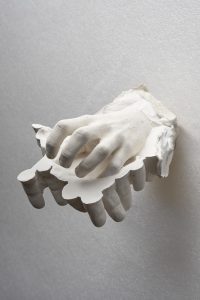 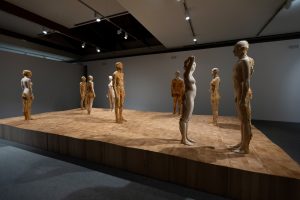