Attraverso: in conversation with Sabrina Muzi

Attraverso: in conversation with Sabrina Muzi

On the occasion of the finissage of the Attraverso (Through) exhibition, a solo show by Sabrina Muzi curated by Antongiulio Vergine and promoted by Capital Project as part of the annual program of artistic residencies designed for the context of the Borgo di Colle Ameno in the municipality of Sasso Marconi (BO), we chatted with the artist to deepen her poetics and the background of the project. Sabrina Muzi’s journey into the basement of Villa Davia ends tonight (18 June 2021): the artist renews her presence from 17.00 to 20.00 to accompany the public through the three rooms that make up the exhibition: the first, corresponding to the moment of birth, is characterized by a pre-eminent vein of randomness and collects traces of the performance she acted in the first two days of the exhibition; the second represents the test, the moment in which to face and overcome one’s sufferings; the third, finally, coincides with the redemption, the key moment in which liberation is achieved.

Andrea Guerrer: Can you tell us something more about you, your education, about when and how you started your artistic experiences?
Sabrina Muzi: I began my research in the nineties and after studying at the Academy of Fine Arts in Macerata I continued to work for a few years in the Marche. Installation and drawing were the first means I approached, then moving on to video, photography and performance. My training continued with a new phase of life and artistic experiences when I moved to Bologna, where I came into direct contact with the cultural scene in the stimulating climate that was enjoyed in those years in the city. Despite not having studied in Bologna, I actively dealt with the research of artists from my generation, working with curators and critics who had trained there and exhibiting in galleries and non-profit spaces in the city and later in various exhibition spaces around Italy. At a certain point I felt the need to have other experiences, and while maintaining my base in Italy, I began to participate in programs of artistic residencies abroad, in a period when in our country they did not yet exist and it was even difficult to explain what they were or what they “used” to do, as I was often asked. Fascinated by the East, I have chosen it as one of my favorite destinations, and I also owe my training and artistic research to the knowledge of this culture in the field.

In the ideal path of her exhibition, which goes from the theme of birth to that of trial and finally to that of redemption, the strength of a destiny seems to be presupposed. But your passion for chance and risk is also evident, symbolized by the classic roll of the dice. Can you tell us more about it?
Destiny, luck, chance, run through the meaning of the exhibition, activated in the first place by the performative action in the two opening days, traces of which remain throughout the exhibition. The incipit of the project is a response obtained from the oracle of the Ching, an ancient book of Chinese wisdom and philosophy, from which I draw the number of hexagrams that I then write on the back of my hands in the performance. I repeat the action in a participatory form in the throw of the dice to “play” with the public in a path in which I lead each one individually to “experience” the exhibition. My work is often nourished by the value of symbols and signs, they are starting points that I rework to build a personal imagination, and in this exhibition, starting from the first environment, there are various “significant” elements. Moving from the ancient Greek philosophers, to the sages of the East and the West, up to contemporary thinkers, the discussion on how much our life depends on us, on chance, or on destiny always remains open and full of facets. The experience of the roll of the dice, however, is also that of getting into the “game” of having the experience, without fear of the results, because the path is only at the beginning, the moment in which we come into the world and we do not yet know what it will be up to what we can get, want, receive or let go. This exhibition is a path to “cross” as the title itself mentions, an experience that concerns each of us, personal experience, challenges, redemption and awareness.

The choice of the location for his exhibition is very significant and suggestive. How did it happen?
“Attraverso”” is a project that cannot ignore the place for which it was conceived, the basement of Villa Davia in the village of Colle Ameno in Sasso Marconi. The exhibition is hosted and promoted by Capital Project, a collective of artists (Marcello Tedesco, Silla Guerrini, Francesco di Tillo) that manages the rich program of contemporary art exhibitions and residences for young artists in this beautiful village. Capital Project invited me and the curator Antongiulio Vergine to think about a project for the basement of Villa Davia, spaces that are very suggestive and full of energy. The beauty of the Villa and its environments, the park, and the community that resides there, immediately strikes visitors, often welcomed by a joyful group of children who enliven the place, but this village also has an intense and troubled history. When I visited the basement I thought about the history of the place, once a Nazi garrison, and in particular about the rooms used for the exhibition that were places of detention. It seemed to me the right place for a project that tackled a discourse on destiny, thinking of a cathartic path, symbolically divided into three stages, which after the initial room and that of the rehearsal, ends with the moment of liberation, identified with the drawing of the glyph of Chiron, mythological figure and astrological constellation of the healing centaur.

How much does the relationship with the public affect your performances?
The involvement with the public in the performative work contains that margin of unpredictability that can only enrich the content of the work, as well as its aesthetic representation. When the public is active not only as a user who acts with his gaze, but puts himself into play in a bodily and mental interaction, something magical happens. In the relational moment there is an exchange, experiences are added together and compared and what results is an added value, the quality of the experience with the other.

Can you tell us something about your plans for the future?
I am working on other performance projects, which I will probably have the opportunity to present within the year. But I am also engaged in a series of works on paper, which include different techniques, a work already started last year in which I continue my research work on symbols and archetypes, which connects Western and Eastern culture. 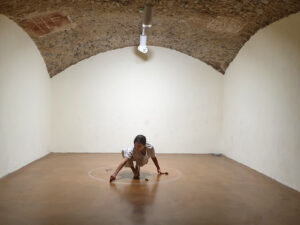 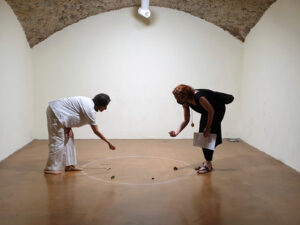 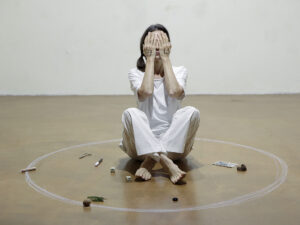 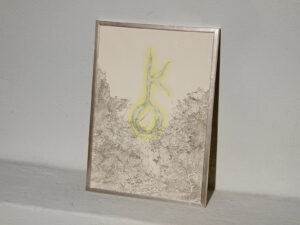 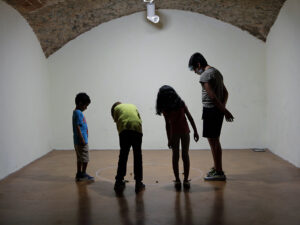