The visionaries of the packagi..

Art hids itself among the shelves of a supermarket and it has been heralded from the balcony of a building. It appeared on abandoned and naked billboards during the lockdown weeks that kept Italy and many other countries asleep waiting. We have seen many projects born during this block phase, developed and usable via social media and other digital platforms. There was no lack of interviews and live conversations on Instagram, as well as virtual exhibitions and visits to the artist’s studios, to see what they were working on during this period of social isolation. However, there is a project that differs from the others: it is Prima Necessità / Basic Necessities, and stems from the synergy between the mysterious ABC Collective (whose members have chosen to remain anonymous) and Spazio Y, an independent reality dedicated to research and contemporary experimentation in Rome, currently managed by the artists Paolo Assenza and Germano Serafini and the professionals of the cultural heritage sector Ilaria Goglia and Silvia Marsano. Active since 2014 in the Quadraro district, in 2016 Spazio Y was selected by The Independent, the research project of the MAXXI Museum aimed at identifying and promoting the most interesting autonomous artistic realities within the national territory.

Prima Necessità / Basic Necessities comes at a time when our lifestyles and our visions are altered by an unprecedented experience, which leads us to question, in our scale of values ​​and priorities, what is really important, and invites the artists to reflect “on the concept of first necessity and utility, claiming the need for personal expression and the artistic act as an essential human condition”. Its added value, however, consists in the call to action addressed to the participants, invited to explore new ways of expression in response to this period – within the limits of the security measures imposed by the ongoing health emergency – with artistic actions capable of crossing the boundaries of their domestic spaces and to reaffirm, through sudden and temporary incursions into the urban fabric, the right of the creative urgency to continue to exist and manifest itself, a real primary necessity.

A sort of “guerrilla” begins, silently, which spreads artistic operations in unexpected and non-institutional places, with that ability – typical of street art – to surprise any passer-by, to contaminate spaces and minds, and to reclaim the city space as a starting point for a horizontal dialogue, capable of triggering new reflections and dialogues within the communities. Here then is Paolo Grassino carrying art on the shelves of a supermarket in Turin, and in the city itself, while life in the street below continues to flow, unaware, Saverio Todaro unrolls a flag with the symbol of biological risk from the balcony of his home – the bright colors, which recall those of the Nazi banners – to underline the dictatorial aspect that the virus has exercised on the masses. Also in Turin, Gisella Chaudry walks, in her head a sculpture-pinwheel that, rotating with the favor of the wind, becomes a visual metaphor for that sense of vertigo that all of us in this period have experienced at least once, at the mercy of events. In Rome Daniele Spanò recreates a sundial on the concrete ground, an ancient tool that helps us mark the flow of new, dilated and languid times spent at home. Erika Nevia Cervo in Naples recreates a line in front of the cinema – tableau vivant of “a daily picture that is never seen again” – nostalgic protest to underline the social importance of a cultural production previously taken for granted, and which we now miss. Two performers then run in the historic center of Florence, waving a white flag bearing the message “is it my world?”, in an action that is part of the project of the same name by Kinkaleri, which “asks a question about political possibilities and artistic skills of the individual, in the personal and collective research of the living being in this century”. On the other hand, Andrea Nolè and Mimmo Rubino with the word “RUN” in Potenza and Adriano La Licata, who in Palermo scratches the celestial surface of a large space billboard and entitled the operation To Have the Blue Devils, an idiomatic expression which in the English language denotes a state of sadness, depression and restlessness. Then, in front of the Colosseum, the Italian flag of Iginio De Luca waved gray, planted on a cut tree trunk, a natural pedestal chosen by tourists to take photos, now a desolate place.

Visible online, through content posted day by day in the social channels of Spazio Y and ABC Collective, Prima Necessità / Basic Necessities has the merit of being able to convey real actions on digital platforms, with highly current content, capable of providing ample reflection. We asked some questions to the members of Space Y and ABC Collective, to learn more about this project.

Laura Guarnier: Prima Necessità / Basic Necessities stems from the collaboration of several protagonists, scattered in various places. Who are you, and when was the idea of ​​the project born?
In the days of full lockdown, all of us at SpazioY, each taken by individual thoughts, had some timid online meetings. We discussed to understand how each of us was experiencing the situation, trying to respond to the strength of what we felt in a form that did not remain like a small action launched and dispersed in the network among the hundreds of calls that we saw born day after day, all somewhat similar. In those days we get an email from a collective that we didn’t know and of whom, looking for, we had found nothing but a single Instragram page, abc_artcollective. We responded with interest to the collective proposal, which sent us the project directives with the recordings of the electronic voice of a text reader, putting us in a totally new and unexpected relational condition and triggering a deep reflection on the present moment through a strange game of role. We went to the game and immediately started discussing it among ourselves and then talking about it with some artist friends who helped us spread the project. In an attempt to imagine a project that could expand as well as the pandemic, and therefore to try to understand how the instances that we were examining could vary according to the place where they were placed, we found an interlocutor in the international artistic platform Nation 2.0 curated by Giuseppe Moscatello based in the United Arab Emirates. We involved the Brussels-based publisher Mariangela Mincione in the project, who enthusiastically decides to be a partner.

What are the themes and problems that the project wants to investigate, through the voice of the various invited artists?
The proposal was to work on the concept of basic necessity and utility and to work on it in those days of total closure. Each of us wondered in the private and public sectors, trying to understand how the concept of basic necessity intersected the artist’s work and expression and the system of contemporary art. In this elitist system, the artist and contemporary art often become unnecessary. The collective wanted to share with us the reflection and the fear that the pandemic could make the importance of making a certain type of art even more invisible, intended as a gesture capable of dialoguing with everyday life, which somehow serves to suggest visions necessary for the present and for the future, inviting us first to experiment with the awareness of the moment, considering the impossibility of being able to use the normal practices of the artists and the art system.

What were the directives and “instructions for use” that you provided to the artists you involved in the project?
We discussed a lot about the idea that it was necessary to confront and respond with the language of the information media that could be used at the time, so social media became the popular channels for the project, but not a means of expression! The directives, drawn up together with the ABC collective, have in fact provided for an invitation to the artists to leave the quarantine to send a signal to the outside, to go out into the street, re-invent their own practice and look for spaces to expose it to the community, voluntarily taking the risks of a concrete action played to the limits of possibilities, an action that would respond, like a guerrilla warfare, with small “explosions”, food for thought for those who accidentally became spectators.

How many and who are the artists who took part in Prima Necessità / Basic Necessities?
There are 64 artists who have so far joined the call, but we receive new projects every day from all over Italy and also from abroad. We started by inviting the artists with whom Spazio Y, over the years, is collaborating, asking many of them to extend the invitation to their other colleagues whom we did not know and who could be suitable for the specificity of the project; involving both artists already recognized for their work, and very young people who have recently left the academies in order to compose a multiple perspective on the concept of artistic gesture and its repositioning as an essential necessity.

How far will this initiative go?
We had two deadlines for receiving the material: the first, May 4, the second on May 15, the date on which we expected to receive all the material from the artists. We asked ourselves how much sense it made to continue the project during the second phase of the lockdown and then we realized that each “phase” of the pandemic has found its specific connotation. By changing the possibilities in which the artists have been able to move, the sense of the project or the needs that the works of the artists have highlighted have not been compromised. We are however evaluating how long the project will continue on the web. The actions and works that the artists continue to send us suggest that we will leave this decision momentarily suspended, following the events and movements of this new world order.

What do you think is the first need for artists today?
The first necessity, the only way forward now is, in our opinion, the widespread diffusion of the artistic gesture (obviously not accidental), against any cultural flattening. While taking risks, we must go forward without compromise, for the duty to give voice and space to art rather than to the system that represents it. We asked the artists to project themselves further, to attempt a distortion of the canons to which the work is subjected, changing the point of view that its existence in a system impervious to real needs makes it totally superfluous and enslaved by economic mechanisms that decide its value. If we could imagine representing these two curves with a graph, or these two different modes – that of the race for success and that in which artistic practice is the fuse that helps make the world shine, the stumbling block and the lens – the first would have very high peaks and dizzying falls, while the second would have a more regular and constant trend over time. This idea may perhaps represent what for us and the artist is the first necessity, to continue to exist and be one of the necessary pillars on which society is founded. 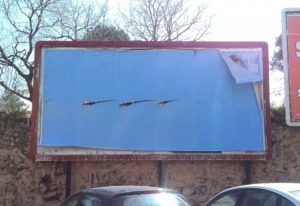 Adriano La Licata, To Have the Blue Devils. Marzo 2020, Palermo 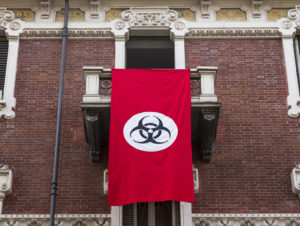 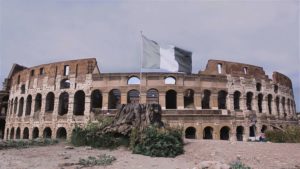 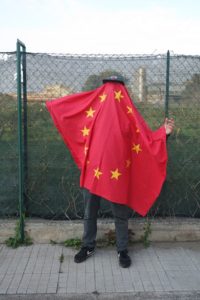 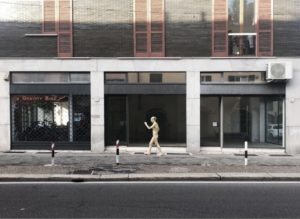 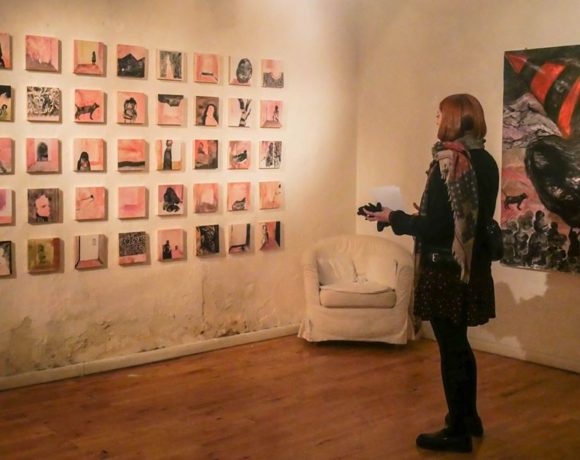 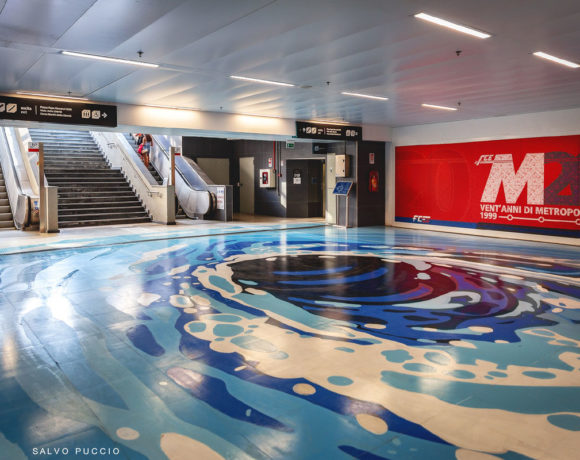