The fragrances of the distilla..

The maat (Museu de Arte, Architecture and Technology) opened in October 2016 as part of the cultural patronage policy undertaken for some time by the EDP Foundation. The headquarters of the Museum is located along the Tagus River, in the historic area of ​​Belém, in Lisbon, on the campus of the EDP Foundation: 38 thousand square meters including a thermoelectric power plant (an emblematic industrial building built in 1908 and today converted for cultural use) and a new building designed by the architecture studio AL_A. The roof, conceived as an extension of the public space, gives access to the city via a pedestrian bridge that crosses the railway line, while the south facade, made up of almost 15 thousand three-dimensional tiles, is designed to capture natural light, creating changing reflections with the seasons and the time of day. The play of light suggests the reflections of Frank O Gehry’s Guggenheim in Bilbao, but obviously the materials and the final effect are very different. The entire exhibition area is 3 thousand square meters and the interior spaces are designed so that they can be configured according to the exhibition needs. The Foundation campus and the two buildings are connected by a garden designed by the landscape architect Vladimir Djurovic, with rest areas, granite pedestrian paths, trees, tree vegetation, log benches. The gardens host two permanent installations: “Placed on Both Side of the Light” (1999) by Lawrence Weiner and “Central Tejo” (2018) by Pedro Cabrita Reis.

The Museum currently hosts a monographic exhibition by Carsten Höller; the exhibition is curated by Vicente Todolí, who had already signed “Doubt” for Pirelli HangarBicocca. Höller’s training is quite unusual and is reflected in his entire work. The author, who lives between two very distant worlds (Sweden and Ghana), has a doctorate in agricultural science with a specialization in chemical ecology, but since the early 1990s he has abandoned the scientific research to devote himself completely to artistic research, without forgetting the preparatory bases of his training and this is the real strength of his entire investigation and of every subsequent aesthetic proposal. In this way, thanks to his unusual epistemological approach, he was able to quickly reach the apexes of the system; we recall some of these passages: Fondazione Prada (Milan, 1990); ICA (Boston, 2003); P.S.1 (New York, 2006); Hamburger Bahnhof (Berlin, 2011); Hayward Gallery (London 2015); Pirelli HangarBicocca (Milan, 2016); Tamayo Museum (Mexico City, 2019). As the icing on the cake, it must be emphasized that he was invited to four editions of the Venice Biennale (2003, 2005, 2009, 2015). We remember his work as in continuous experimentation and mutation, with very strong and well recognizable and truly engaging formal signs and where everything turns like in an immense amusement park: vehicles, slides, toys, animals (reindeer, canaries, mice, flies), shows, films, lights, mirrors, mushrooms, environments, sensory tanks, photographic prints, interactive installations.

The exhibition (which was created with the collaboration of Thyssen-Bornemisza Art Contemporary, musée d’art contemporain Marseille, Christel Bonnier Collection, INELCOM, Gagosian, MASSIMODECARLO, Air de Paris and Galleria Continua) brings together a series of works focused on the theme of light and darkness, starting from the first testimonies from 1987. About twenty pieces, many of which have been specially recreated for this project and which in the tour provide a multisensory experience of altered perception given that the only light which defines the profile of the individual objects and their contextualization is that emanating from the objects themselves. This is why we can speak of a corridor, as an obligatory path that becomes the system of branched thinking from the inside out and of an illumination towards the roots of a conscious soul. Ultimately one participates in a feeling of disorientation and deterritorialization, a feeling that pushes the gaze towards a forward flight, in the direction of an unreachable infinity or within a dream where everything is possible, from a superficial and tactile experience up to the deep investigation. And this is because more than places (references to geographies or environmental contexts, coordinates of cities or specific physical places) people, perceptions and memories count. The suspension shifts the planes of reality to lead our perceptive and projective mind towards those bodies that emit light. In the words of the artist, “all these works offer the possibility of unique inner experiences that can be used to explore the self”. 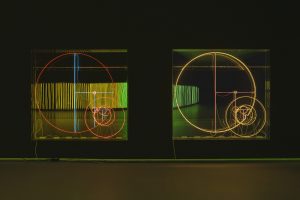 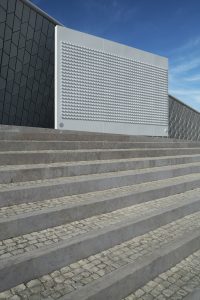 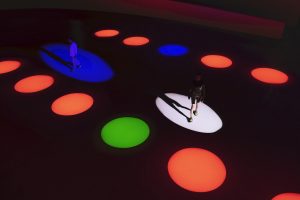