Claudio Malacarne. The light is colored

The intersection of multimedia..

Claudio Malacarne. The light is colored

Currently on show, until May 30th 2019, at the Pisacane Gallery in Milan, the solo exhibition “La luce si colora (The light is colored)” by Claudio Malacarne (Mantova, 1956), figurative painter with important institutional awards and exhibitions at Palazzo Collicola Arti Visive in Spoleto (curated by Gianluca Marziani), the Permanente in Milan, Chiostro del Bramante in Rome, the former Church Chiesa del Carmine in Taormina, the Sassi of Matera Foundation.

A selection of about thirty works belonging to two fortunate pictorial cycles, “The Dreamers” and the “Gardens” are now on display at Pisacane Gallery. If in the latter it is possible to find the particular luministic research that, starting from the study of post-Impressionists and Fauves, Malacarne applies to the plant world giving it all its original chromatic richness, it is in the first cycle that the most intimate artist’s researches are visible instead. The only subject of the entire cycle are the bathers, enigmatic figures caught in a particular moment of life, suspended in a limited space-time horizon through which they seem to reach the eternal.

Malacarne’s subjects are natively aquatic creatures, who enjoy a hybrid status between human and non-human. They are fish, amphibians, nereids not touched by the common time of mankind, softly immersed in swimming, play and fleeting conversations in light-blue waters. Ageless youths, with universal features erased by flat and fast brushstrokes, with broken limbs by the refraction of sea waves. Some cliffs define the boundaries of the painting, towards which swimmers swim slowly, floating, letting themselves be carried away by the waves.

The horizon of the sea, the line that separates water and sky, disappears in these works of art to leave space only for an indistinct surface that becomes sky, earth and sea, a unique territory in which figures live. The skin of the canvas vibrates with material density in a painting that becomes fluid, oily, in which the bodies slide between one glare and another of color.

Malacarne’s colors are distributed in large flat strokes, patches of pure, undiluted color that, according to the Impressionists’ lesson, do not mix with each other but come together to complement each other, to unify from afar only in the eye of the spectator: an aesthetic experience that recreates the spectrum of natural colors. The blue of the sea and the yellow-orange of the sun, the green of the algae and the bright flesh of the bodies form a whole on the palette, placed side by side like small scales to constitute a single being, wetting the bodies and faces of that same light and leaving the pink of the bodies in the water. Like the blue mountains painted by Leonardo, the yellow bodies of Gauguin’s women, the purple and blue tree trunks or the green reflections on the faces by Van Gogh, the Malacarne’s colors blend and confuse together to underline how we are all immersed, people and landscape, in the same atmosphere.

Thus the figure breaks, no longer made of contours and lines, but only by color. Sometimes the preparatory drawing can be seen under colors, quickly sketched with a brush, with a line that sometimes disappears, sometimes makes a contour to dig around, around which to recreate the shadow and give volume to the subjects. Malacarne’s hand puts and removes matter, adds patches of pure white to illuminate the scene, the dark brown due to the hollows of the shoulders, of the neck, on the bodies tanned under the yellow of the summer.

The “Dreamers” by Malacarne, from large canvases to small oils on paper, offer an extraordinarily luminosity and chromatic range, while remaining within the seemingly homogeneous horizon of blue-green sea. Sometimes the artist removes the color with the back of the brush recreating internal movements on the surface of the canvas and simulating the transparent reflections of the water, its vibrations, returning to the eye the impression of being in front of a flash of water or a wave in the sea, a reflection of the sun, a glitter that shines in the eyes of the spectator.

The Light is colored (La luce si colora). The harmony of light in the works by Claudio Malacarne 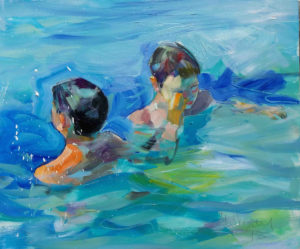 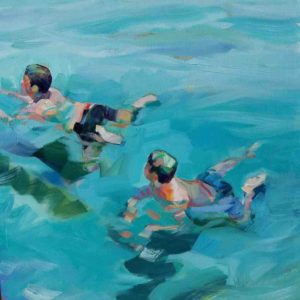 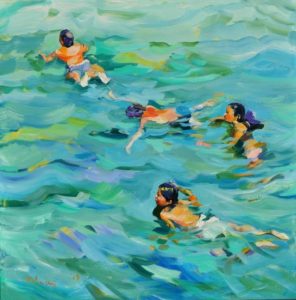