Costantino Nivola from Sardinia to the United Stat...

Costantino Nivola from Sardinia to the United States

In Italy, in Sardinia, in Orani, there is a museum made out to the memory of Costantino Nivola. It is a little-known reality (outskirts of the empire? No advertising?), yet it has exhibitions with names of great appeal and significant for contemporary culture. We recall some of them recently created: “Endless Form” by Tony Cragg (2018), curated by Giuliana Altea and Antonella Camarda; “Atelier Mendini. The architecture “(2019), curated by Aldo Colonetti; “Attached By Ebb & Flow”, installation by Lawrence Weiner (2019), curated by Giuliana Altea and Antonella Camarda; “You should remember to do those things done before that have to be done again”, Sarah Entwistle’s first solo show in an Italian institution, curated by Alfredo Camerotti (2020-2021); “Antesteria” by Peter Halley (from 12 May to 22 August 2021), curated by Giuliana Altea and Antonella Camarda. By Costantino Nivola (born Costantino Nivola Mele and also known as Tino Nivola in the USA; Orani, 1911-East Hampton, 1988) the Museum preserves the most important collection of his works.

Now, there is another little-publicized and little-known reality, it is Magazzino Italian Art. Designed by Spanish architect Miguel Quismondo, Magazzino opened its doors in 2017, thanks to Nancy Olnick and Giorgio Spanu, creating a new cultural center in Cold Spring (New York). Magazzino Italian Art is a real research center dedicated to the promotion of Italian art in the United States, starting from the years after the Second World War up to the present day. In particular, the library offers a special focus on the Arte Povera movement, with almost a thousand books on the subject available free of charge to students and researchers.

The Nivola: Sandscapes exhibition was born from a collaboration between Magazzino Italian Art and the Nivola Foundation, gathering works coming not only from the artist’s family collection, but also from important institutional and private loans. The exhibition was curated by Teresa Kittler, Scholar-in-Residence 2020-21 at Magazzino, and was created with the support of the Italian Embassy in Washington DC.

Finally, let’s give a brief profile of the author: Costantino Nivola graduated as a graphic designer in 1936 at the ISIA in Monza and shortly after he became director of the graphic office of Olivetti, for which he created the decorations of the Italian pavilion for the Exposition Internationale de Arts et Techniques dans la Vie Moderne. In 1938 he married Ruth Guggenheim and shortly after he was forced to flee fascist Italy due to anti-Semitic persecutions, taking refuge first in Paris and then in New York.

The exhibition examines the sandcasting techniques that the artist developed in the late 1940s, merging his interest in sculpture, painting, Sardinian iconography and the human figure. His method involved carving in wet sand and filling the negative form with plaster. Nivola continued to evolve his technique over time and experimented with different materials, replacing plaster with resistant concrete, which allowed him to create decorative reliefs for large public commissions.

Nivola: Sandscapes presents a rare selection of preparatory projects and sketches for important architectural decorations. Some of these projects are on display, including the Olivetti Showroom on 5th Avenue, the Bridgeport Post, the Bolling Federal Building in Kansas City, the Janesville Gazette and the William E. Grady Vocational High School in Brooklyn. All works that oppose the force of gravity, affirming one’s vital soul in the desire for levitation. There is no shortage of references to the iconographic stylistic features of pre-Nuraghic civilizations, however, bent to the modern culture of abstract and informal art, and this proves that the fruitfulness of an image also draws its roots from past history and that intertwining is always a wealth and only forgetfulness ends up impoverishing our expressive possibilities.

In the words of Giuliana Altea, president of the Nivola Foundation: “This exhibition highlights Nivola’s search for identity and his global vision, the coexistence in his work of a modernist legacy and postmodernist intuitions, his double interest in form and the ideals of the community”. Finally, we recall, in these years of great migration, that in the end Nivola was hosted in the United States without obtaining American citizenship and without ever interrupting his relations with his native country. All in memory of a dialogue that is always possible between distant and different cultures. 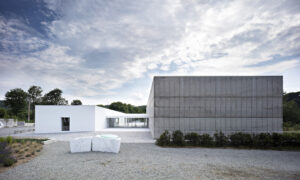 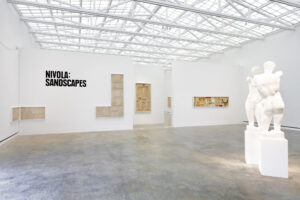 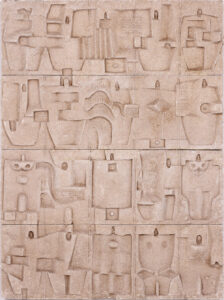