The exhibition Ritual Acts at Galleria Ramo shows two apparently very distant works: those of the American artist Dave Swensen and those of the italian Matteo Messori.The first is characterized by a regressive and almost outsider expressionism and a nocturnal sense of suspension; it seems to narrate a humanity that dissolves in the dim light of domestic interiors, using formats that reminds very strongly ex-votos and icons; devotional objects in some way, in which the images seem not paintings, but apparitions – just like the icon par excellence, which is acheropita. They are diaphanous figures vanishing in the dark as they make a gesture or start to say a word, frozen on their lips.

These compositions show the poetic of making the images resist, as bearers of existential values, catching them at the edge of their disintegration, as if to steal them from oblivion a moment before its completion. In this gesture, there is all the emotional meaning of keeping the small appearances of living, and at the same time the attempt to aestheticize, through representation, the fading moment, making it forever immobile, mute, but like any artwork able to generate relationships. This is the reason why they remind me of the surreal corpses of Dr. Martial Canterel in Locus Solus, a novel by Raymond Roussel, which regain a life appearance by repeating the gestures of a moment of their existence over and over again.

Matteo Messori’s “ritual act” starts from an intimate space of reflection and get a monumentality expressed even in small dimensions. One title in particular seems paradigmatic to me: Breath. Drawing with breath is one of the games that everyone plays in front of a window since childhood, misting it and tracing with fingers words, symbols and images destined to vanish with the condensation generated by their own breath.

Reflection, both in the sense of a process of thought and of reflecting oneself in it and in the misted glass in which the will to represent is expressed. A context between sharing and introspection, the appearance of a thought when it manifests itself and then disappears. An act of creation, performative in its purest meaning, because it leaves no trace; but if this were the subject of the work, it would be enough to document that gesture and its temporality.

Actually, breath is a narrative pretext from which the image draws to structure itself: the “ritual act” is internal to the making of the image, which also contains the memory of an intimate and daily ritual. From a certain point of view, the scheme through which Messori constructs the painting is comparable to some surrealist processes (Ernst, Dalì, Tanguy): the image arises from a “hallucination” or from a process of “critical paranoia” stimulated by some automatisms, then it is frozen and contextualized in a three-dimensional space where it casts shadows and at the same time reveals the illusionistic nature of the painting.

The choice of an unconventional medium such as denim amplifies the presence of the painted object into the world of things, and not just the world of ideas. Messori’s painting acts in space, and its signs are clear, iconic, ideographic; precisely in that space prominences emerge on which signs are similarly traced: obelisks that create a relationship with the works on the wall, build the space and give the coordinates of a total context, not episodic, a dialogue with the Swensen’s works that become a dialectical counterpoint.

Precisely this dialectic shows the relationship, not without conflicts, between the luminosity of Messori’s work and the crepuscularity of Swensen; a montage that activates connections, a story that springs from contrasts. In both these works it is evident, with opposite poetic but similar needs, that these works try to freeze the flow of time through a gesture, which becomes a “ritual act” precisely because it is captured in its making and made incorruptible by the artistic text. 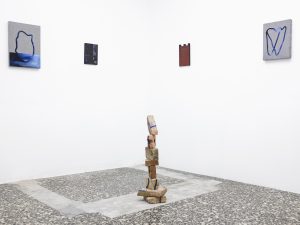 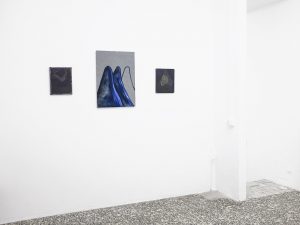 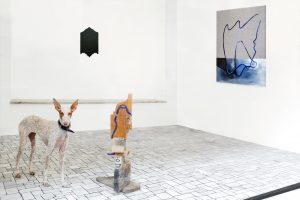 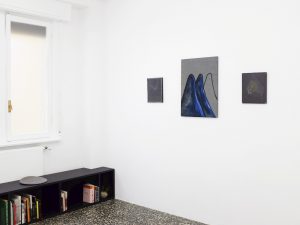